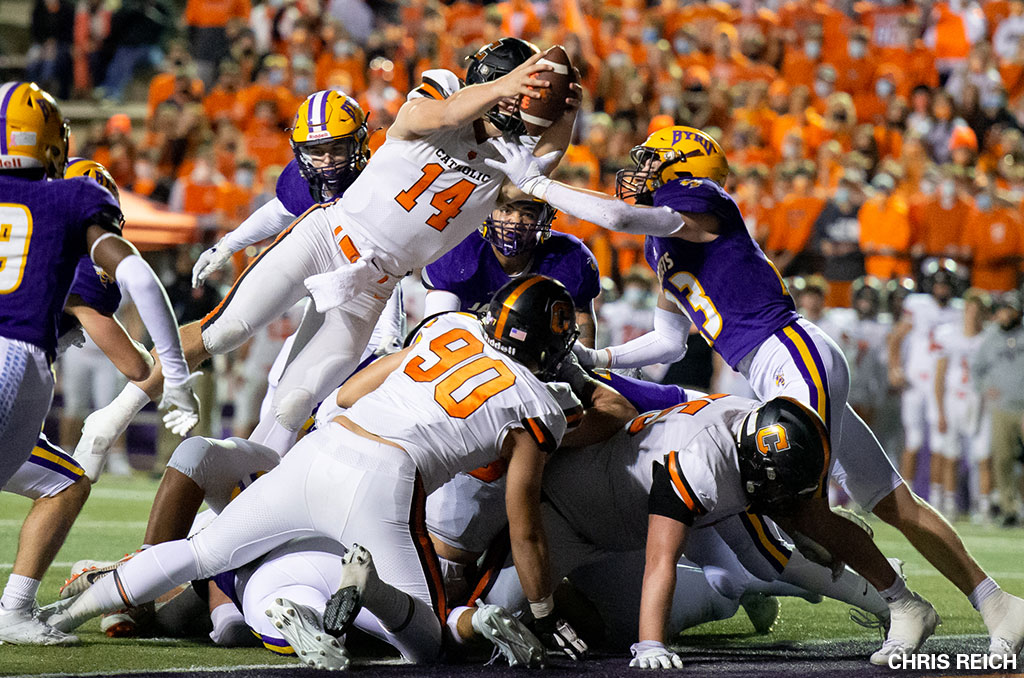 The Bears (9-2) have now won three football titles in six years in Louisiana’s top select division. C.E. Byrd (10-1) suffered its first loss of the season after advancing to its first state title game in seven years.

Catholic completes a season with one of the toughest schedules played by a state champion. The Bears played against seven eventual playoff teams including two defending state champions in Edna Karr and Acadiana. They knocked off No. 1 seeded Brother Martin to advance to the state title game. Overall, their regular season opponent’s record was 36-17 (68%).

Tre’ Benson, voted Most Outstanding Player for Catholic, finished with four receptions for 140 yards that included a beautiful 78-yard touchdown pass while QB Daniel Beale went 11-of-17 for 220 yards and two touchdowns.

The Bears put together a balanced attack on offense that completed the game with 364 total yards and taking advantage of three red zone chances and were 7-of-11 on third down conversions.

Byrd put together a few sustaining drives but were unable to take advantage of the big plays in the game. The Yellow Jackets were led by William Berry, who was voted Most Outstanding Player for Byrd, who rushed for 55 yards and a touchdown and finished with 110 all-purpose yards.

On defense, Catholic was led by Mikey Albarado who finished with eight total tackles and a forced fumble. For Byrd, Brayden Hermes intercepted two passes on the night while total nine tackles.

• 03:10 – Catholic-BR | Landon O’Conner leaped over a host of offensive and defensive lineman for the touchdown that capped a 13-play drive that took over six minutes off the clock.

• 10:18 – Catholic-BR | Daniel Beale connected with Tre’ Benson on a laser 78-yard touchdown reception on the first play of the drive for the Bears who led by two scores.

• 00:18 – C.E. Byrd | William Berry went around end to score on a four yard rush to get the Yellow Jackets on the scoreboard. Although the lead was cut, Catholic-BR was able to block the PAT.

• 11:11 – Catholic-BR | Josh Robertson scooped up a Yellow Jacket fumble and waltzed right into the endzone untouched to extend Catholic’s lead by two scores.

• 10:53 – Catholic-BR | Daniel Beale passed for his second touchdown of the game as he connected with Shelton Sampson to stretch the Bears’ lead to a 28-12 score.

“This means alot. I am going to get to coach for another 20-25 years, God-willing, but for some of these guys it will be the last time they put a helmet on. That is what means the world to me. I am glad that we won it but it’s all about these guys. They put the work in”

“Our defense has been playing good all season but it has not shown on paper at times because of some big plays we gave up. However, seeing the veer for a third time this year really keyed us up. We just wanted to be physical and go out on top”

“Well, we fell behind to start but I thought we did well to get it to a one-score game before the half. When we came out and turned over on the scoop and score that was the big difference. We got it back to a one possession game and then they just did a great job and wore us down. They’re a great football team with a lot of weapons. They just wore us down in the second half.”