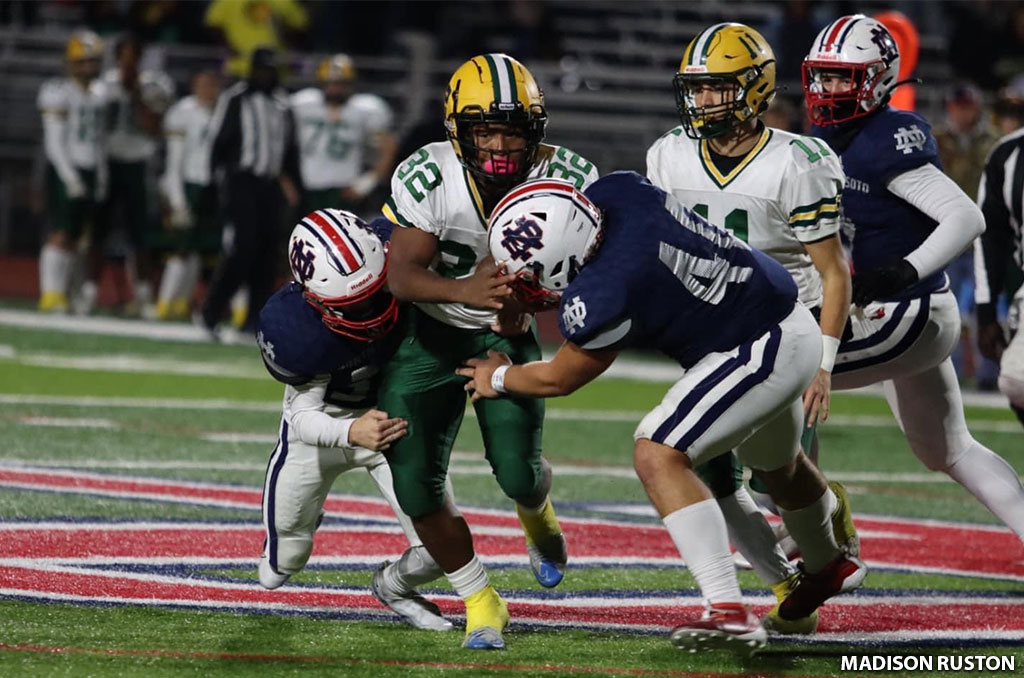 North DeSoto has never won a state championship in football. In fact, this will be only the third time in school history that the Griffins have advanced into the quarterfinals.

Those statistics may seem like there wouldn’t be many experiences in state championships on the team, but that’s not the case at all. There’s an experience of both failure and success in the state playoffs.

Senior Hunter Addison already has a state championship ring in wrestling and junior Trysten Hopper knows what it feels like to come up just short of winning it all in baseball. They both feel their experience will benefit them in the journey for football, as they both play huge roles on offense and defense.

When you think of offense, you think of passes flying through the air, running backs breaking tackles, and most importantly you think of touchdowns. For Hopper, his role on offense doesn’t always get the spotlight and at most times can go unnoticed. When asked how he felt about not always being the one who’s scoring the touchdowns, he said it’s all about a “we, not me mentality”.

“To block for my teammates is a privilege,” Hopper said. “One thing Coach Dunn says is F.A.M.I.L.Y which means “forget about me I love you” and that’s the way I love to play football.”

As a guy that has always been asked to do jobs that won’t receive the spotlight, whether it’s blocking in football or pinch running in baseball, Hopper says it’s the little things that are most important to him.

“The little things are so important to me because my whole life my mom and dad have always told me to stay humble and do the little things right,” said Hopper. “I know I’m not always going to be in the spotlight. But I always keep my head down and I keep grinding. I know as long as I work hard every day good things come out of it.”

Last season Hopper and the Griffin baseball team made it to the state baseball tournament in Sulphur. At the beginning of every season, that’s the ultimate goal, making it to Sulphur. The Griffins ultimately fell short of winning it all, but Hopper believes going through the highs and lows of a baseball state championship run is paving the way for a football championship run.

“I believe that already experiencing a state tournament will help me out with the nerves and will help me thrive off of the adrenaline instead of being in my head,” Hopper said.

He also said the emotions of losing are something that’s driving him to win it all in football.

“It was sad because we couldn’t finish the job and I couldn’t play with those seniors anymore. But something clicked that made me hungry. And I told myself that I am going to win a state championship at North DeSoto.” Said Hopper

Unlikely Hopper, Hunter Addison has experienced the success of a state championship, as he already has a ring in wrestling. Addison says wrestling is a huge reason why he’s having so much success at safety.

Addison is one of the hardest hitters on the defense. He says looking up and seeing a clear shot at the ball carrier is something he thrives off of.

“When I land a big hit I get a huge thrill that is almost indescribable. I know that it makes the offensive player and the rest of the offense feel defeated, no matter how big the play was for them. Once I make a big hit, it almost makes me play harder and faster too,” Addison said.

Going from an individual sport to a team sport, Addison says his mindset does have to change, but he still prepares the same for both sports.

“My mindset does have to change from sport to sport, but it is not as much as you would think,” said Addison. “There is more of a sense of responsibility because I have to do a specific job instead of doing it all myself. Before the game though, I still prepare exactly the same as I would for a wrestling match.”

Addison’s path to a state championship in wrestling wasn’t a simple one, but he feels the adversity he faced will continue to push him through the playoffs for football.

“In the state finals, I pinned a kid who beat me earlier in the year. He was also ranked as the one seed for the tournament, so beating him really meant a lot to me,” Addison said.

Both boys have different experiences, but both feel their experiences will help them and their teammates do something that’s never been done in North DeSoto football history and that would be to take the school on its first trip inside the Caesars Superdome.

They are both very thankful that they’ll get to spend their Thanksgiving practicing with their brothers.

“Spending Thanksgiving with my brothers is truly a blessing. We have never practiced on Thanksgiving, but I wouldn’t want to change it for anything because my teammates truly are family.” Hopper said.

“It is an amazing experience, I know that many people will never be able to experience practicing this late in the year. It gives me a little more to be thankful for this Thanksgiving,” Addison said.

Addison is even more thankful to be back on the field after he decided to take the year off from football last season.

“When I took that year off from football I didn’t miss it at the time, but as soon as a stepped back on the field this year, I started to regret not playing last year,” said Addison. “It’s great to be back on the team, especially with the success we are having this year. That has a lot to do with the team trusting me and the leadership council to change the culture of the team this year.”

Hopper says the seniors have cemented their legacy into the team and have set the culture for him and the rest of the underclassmen to build on for years to come.

“This senior class is something special,” said Hopper. “There hasn’t been leadership and friendships throughout the team like this since I can remember. They strive every day to be great. And I tell them every game that I am playing this game for them and we are going to that Dome.” Hopper said.

The Griffins will play in the quarterfinals Friday night for only the third time in school history. They will travel to No. 28-seed Breaux Bridge, in hopes of ending their Cinderella story season to advance to the semifinals and one step closer to their ultimate goal of being state champions.