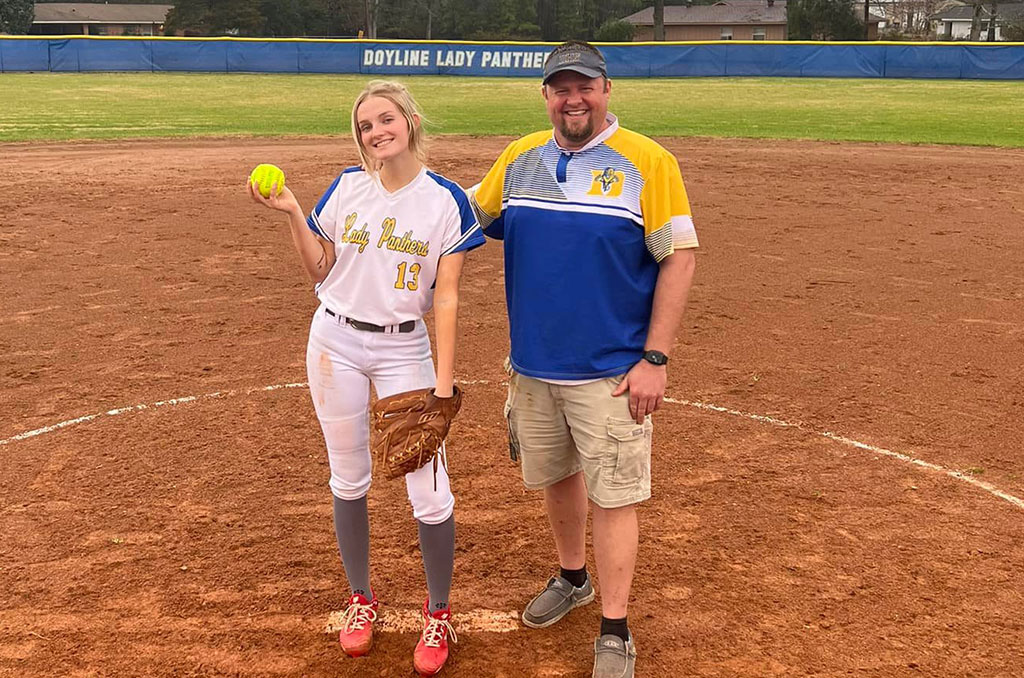 Lexi Normand doesn’t always step inside the circle for Doyline High School, but when she does, she prefers either a no-hitter or a perfect game.

Normand, who normally plays shortstop, stepped in and tossed a three-inning perfect game, allowing no runs and striking out three in the process. It was the eighth no-hitter and second perfect game of Normand’s career. The senior is signed to play

“Alexis is the perfect team player,” said Doyline head coach Dustin Hayes. “She is playing out of her normal position when pitching. She may not be the fastest pitcher we have but she is always consistent.”

The Arkansas-Rich Mountain signee was also 2-for-2 at the plate. In total, she has hit five singles, two doubles and has walked three times in her first 11 plate appearances.

“She is a smart softball player and knows how to play any position,” said Hayes. “If it’s in the infield, the other team better have a good at-bat or it’s not getting by her. She is just as solid of a pitcher and player that I can get.”

Doyline has won its last two games by a combined score of 31-1 and will continue district play Monday at Saline.

Other highlights from around the state:

• Thomas Jefferson’s Oscha Carter batted 2-for-3 in Wednesday’s contest against Archbishop Hannan. The junior outfielder helped lead her team to a season-opening win over Dominican and is set to face John Curtis Thursday afternoon.

• Lutcher hit four home runs as a team to overcome an 8-1 deficit and defeat Denham Springs, 13-12. Blair Ursin and Gracie Poche each hit a two-run bomb while Maria Detillier and Lexi Simons also hit dingers in the game.

• Haynes Academy received exceptional performances from pitcher Delaney Walker who worked 6.1 innings and gave up just five hits while striking out 10. Jamie Weidel went 4-for-4 on the night while Walker, Aubrie Claverie and Daela Calverie also turned in multiple-hit efforts for the Yellow Jackets.