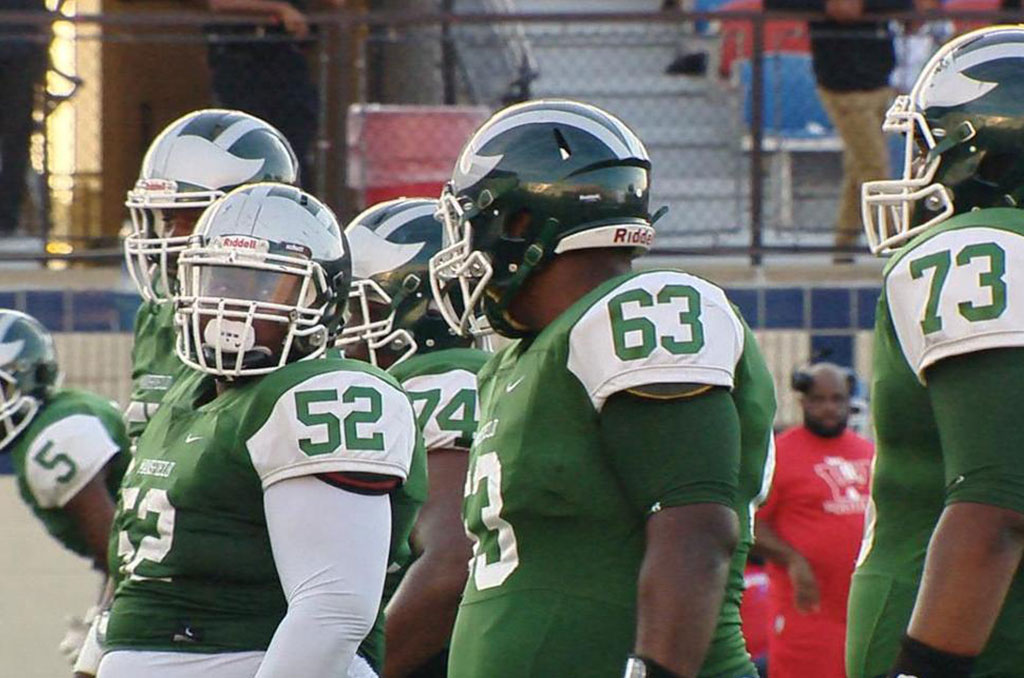 North Webster Knights’ head coach John Ware was on the golf course this summer when he learned his Knights, according to the GeauxPreps.com Preseason Coaches Poll, were the favorite to win District 1-3A.

“I don’t know,” Ware said when asked why other coaches in the district would select his team as the favorite. “I would have thought Mansfield would be at the top.”

The Knights were 3-5 in 2020 as they worked through the most difficult season in the history of high school football. It wasn’t just the COVID-19 protocols and LHSAA regulations North Webster had to deal with. The injury bug bit the Knights more than once as Ware and his coaching staff had to deal with five season-ending injuries.

When the dust settled after their 47-16 first-round playoff loss to eventual state runner up Union Parish, Ware told the Tim Fletcher Show that he was as proud of his 2020 team as any team that he has ever coached.

“I’m just proud of the way they overcame adversity,” Ware said. “Every time we got going it seemed like something major would happen. I think that experience showed them that bad things can happen, and we can still be in it.”

Leading the Knights on the offensive side of the ball will be tackles Drew Hutchinson (6-5, 310) and Ty Modisette (5-11, 225). Wide receiver Jamarcus Stephens (6-0, 185) has big time, play-making ability at wide receiver. Stephens will also play a key role in the secondary for the Knights.

Other standouts on the defensive side of the football include middle linebacker Jatarion Robinson (6-0, 190).

A focus for Ware and his defensive staff will be better production on third down.

If last season is any indication, the District 1-3A championship will go through Mansfield, Louisiana. The Knights will take on the Mansfield Wolverines at 7pm on Friday, October 29th.

Mansfield head coach Mike Green hopes his team can come away with another victory after beating the Knights 46-20 a year ago.

Like North Webster, Mansfield finished up 3-5 last year, losing to 18-6 in the first round of the LHSAA playoffs to Church Point.

Dakeldrick Thomas (6-0,180) returns at quarterback for the Wolverines. Thomas will have some big bodies up front protecting him including Carlus Griffin (6-3, 310) and Jaylan Vance (6-3,315). One of Thomas’ main targets will be wide receiver Dequinton Thomas (6-2,170).

In the Mansfield offense, Griffin and Vance and company will be called upon to open holes for running back Monquavius Wells (6-1, 175).

Defensively, the Wolverines will be led by Griffin along the front and Trey Dewitt (6-1, 175) in the secondary.

“We have a lot of new faces that will be on the field,” Green, who begins his sixth season as head coach, said. “We’ll have to grow up fast, but we have potential if we work hard. We’ll be aggressive on defense and on offense we’ll rely on the offensive line to open holes.”

Mansfield was picked by district coaches to finish second in the District 1-3A GeauxPreps.com Preseason Coaches Poll.

Despite going undefeated in District 1-3A a year ago, the Green Oaks Giants were picked to finish third in the 2021 GeauxPreps.com Preseason Coaches Poll. Under the direction of Terrence Isaac, the Giants margin of victory over district opponents was 23 points. Only one, a 34-28 victory over Mansfield, was in single digits.

Isaac resigned from Green Oaks in December to become the head coach at Vermilion Community College in Ely, Minnesota. Isaac took quarterback Keith “Boomtown” Baker, who passed for nearly 10,000 yards during his high school career, with him to Minnesota.

It didn’t take Green Oaks Principal Steven Grant, a former Grambling Tiger football players who was coached by the late legendary Eddie Robinson, long to find his man. Grant hired Grace King’s Chadwick Lewis, bringing the C.E. Byrd alum back to Shreveport where he grew up, graduated from high school, and began his coaching career.

“We will be a young team breaking in quite a few new starters specifically at the QB position,” Lewis said about the 2021 Green Oaks Giants. “We will be competitive. If the young guys come along, we should be ok.”

Despite the losses of Baker and other Green Oaks seniors who were lost to graduation, Lewis isn’t completely without weapons to utilize, especially on the offensive side. Wide receiver De’Coldest Crawford (6-1, 178), who arguably has the best football name in the state of Louisiana, is arguably one of the best wide receivers in the state. The three-star LSU commit is ranked as the No. 15 recruit in the state by 24/7 Sports. Only two wide receivers are ranked higher.

Crawford is one of four Giants returning on offense. Green Oaks also returns four starters on the defensive side of the ball.

If teams in District 1-3A focus on Crawford and double the Green Oaks standout, wide receiver Jaylon Jackson (5-6, 165) should be able to take advantage of the situation.

The Loyola Flyers are looking to put the 2020 in their rear view mirror as head coach Scott Mallien enters year two. Last year, the Flyers finished 2-5 and lost in the first round of the LHSAA playoffs.

“We expect to make significant improvements in all phases,” Mallien said. “Toughness, Discipline, Effort and Attitude. We will work very hard to control the controllable factors that go into being a successful football program and team. We are excited at the prospects for the future growth and development and the goal is to get 1% better each and every day!”

Davis, Bryan, and Jackson will also see action on the defensive line.

For the Bossier Bearkats, the energy and enthusiasm around the program has been unmatched over the summer as Bossier Principal David Thrash brought in Deaumante Johnson to lead the program.

Johnson, who won a state championship last year as a defensive backs coach at Calvary, is bringing a change in scheme with him to Bearkat Drive. After watching his new coach and student-athletes in action over the summer, Thrash referred to his players as “Air Kats”

“We will run a well-disciplined team that’s going to compete every play all the way to the state championship,” Johnson said.

Quote from Johnson: “We will run a well-disciplined team that’s going to compete every play all the way to the state championship.”

Quote from Lewis: “We will be a young team breaking in quite a few new starters specifically at the QB position. We will be competitive. If the young guys come along, we should be ok.”

Quote from Mallien: “We are excited at the prospects for the future growth and development and the goal is to get 1% better each and every day!”

Quote from Green: “We have a lot of new faces that will be on the field. We’ll have to grow up fast, but we have potential if we work hard.”

Quote from Ware: “We want more balance on the offensive side of the football and to be efficient with our 3rd down defense to get off the field.”