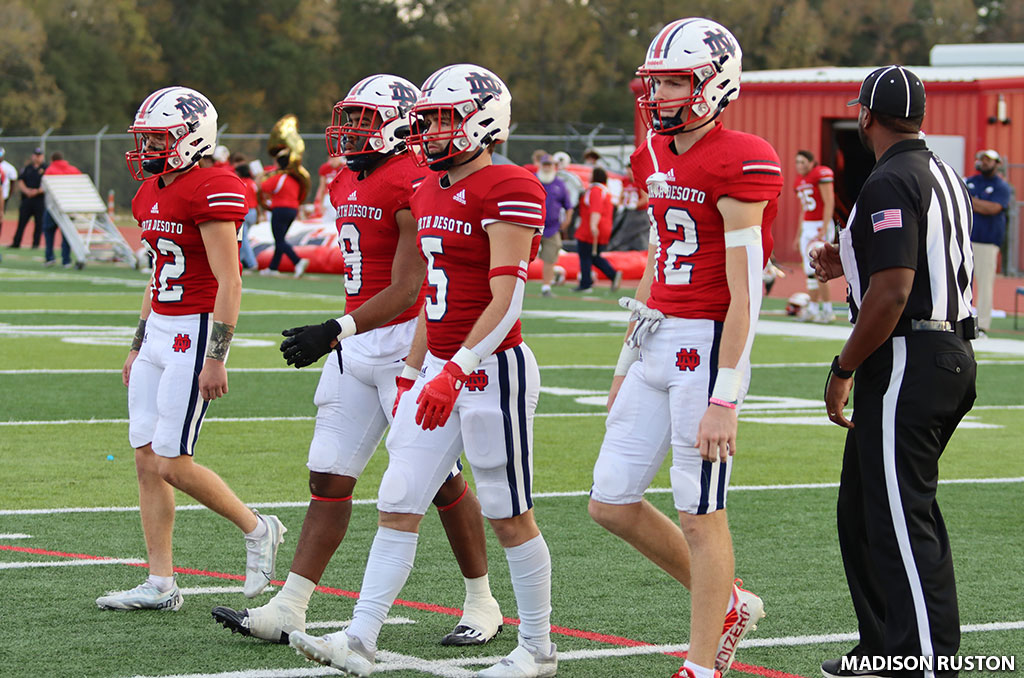 Every team dreams of having that perfect, undefeated season.

For North DeSoto, that goal fell just short on Friday night in a dogfight against Northwood, 20-19. The Griffins fell just one win shy of an undefeated mark on the heels of setting a school record for victories in a season.

But Coach Dunn and his team understand that the rivalry game against Northwood was just one component of the ultimate goal.

“The main thing is still the main thing,” Dunn said as he addressed his team after a tough loss on Friday night. “Our goal is a state championship and one loss isn’t going to change that.”

Northwood was able to contain the high-powered offense of the Griffins and for one of the first times all season, the dominant Griffin defense struggled to stop the run. Sophomore wide receiver Cole Cory and junior linebacker B.T. McMillan both have said this loss doesn’t define them and will only make them stronger as a team. They both left it all on the field until the very last play, but they both believe adversity is what’s going to bring them together as brothers and boost their playoff run.

Both boys believe adversity, rather it’s now or in the playoffs, is what’s going to bring them closer as a family. Coming together in the hard times and fighting as one, and playing for each other, not just themselves, will be the motivator for their championship run. They believe adversity is what’s going to bring them together and not divide them apart.

Cory says he’s known all year that at some point this team would face adversity. He feels the adversity they faced on Friday did exactly what it was supposed to do. Bring them together.

“The day before our matchup against Airline at the beginning of the season, Coach Dunn gave me the opportunity to speak in front of the team about our motto, “RAFT”, and in my preparation for my speech I remembered a bible verse,” Cory said. “A friend loves at all times, and a brother is born for adversity” Proverbs 17:17.

“Immediately I knew that through adversity we would grow stronger as a team because of the culture and brotherhood that we set around ourselves. I believe that the reason for our success is because we play as a family.”

McMillan feels like this adversity came at just the right time as it is all the motivation they need to get ready for playoffs.

“This past week’s game meant a lot for my teammates and me. We knew coming into this game that our defense was going to have to play “lights out” in order to win. With big-time threats such as Q White and Mason Welch, we knew we had our work cut out for us.” McMillan said. “Ultimately we came up short but it was not without a fight to the finish. We were definitely in the game for a full four quarters and it could have easily gone either way. For the first time all year, we were faced with adversity and I am more than happy with how my teammates and coaches responded.”

With a game that was described as having a semifinal-type of atmosphere, McMillan feels all the game did was help prepare them for playoffs.

“This past week’s game and the atmosphere was like no other,” said McMillan. “Proverbs 27:17 says “As iron sharpens iron, so one person sharpens another”. I believe that Coach Brown and his team did just that for us this past week. Both teams were challenged to play their best football. The caliber of football played this past Friday is what every Friday night should look like. Championship football was played. In order to be the best you must play in the best competition. The dream of winning a state championship for our team is still very much alive and the opportunity to do so is very prominent.”

Coach Dunn always talks about a 24-hour rule. The team has 24 hours to enjoy the win or 24 hours to get over a loss. With a tough late-season loss like this, both boys used their time to get focused for playoffs.

“After the game, I sat in the stands for about 20 minutes visualizing what I could have done better and also as a team what we could have done differently,” Cory said. “Knowing that I couldn’t go back, I realized that the only thing that matters is what is ahead of us and that’s a state championship.”

“After the game, I immediately watched the complete game film and saw where I could improve, and then it was over. We will never be able to fix the past, but we can control and refine our approach into the upcoming week,” said McMillan. “After speaking briefly on the phone with Coach Dunn Saturday morning, he reminded me that Northwood is just part of the journey. The goal is to end up in the ‘Dome in December and to win a state championship.”

McMillan feels the team will show up ready to give it their all in practice. He says they all focused on leaving a legacy and doing something that’s never been done before.

“I am looking forward to this week of practice. I feel as if the energy level and the will to win will be very high. McMillan said. “The chance to do something very special that has never been accomplished before in school history is in our minds daily. I truly believe that throughout our team we have all the assets needed in order to bring a ring back to Stonewall in December.”

Cory says winning a state championship would mean everything to him, as he’s dreamed about it ever since he was little.

“As a kid, I’ve dreamed of holding that trophy on the 50-yard line,” said Cory. “I knew that to get there it would mean making it a part of myself and working as hard as possible, even if that meant being the first one there and the last one to leave. Being a young starter I never felt that I had a huge vocal role. Instead, I just put my head down, work hard and try to lead by example. “We, as a team, understood that if we worked harder than any team and prepared even more that not only would we reach our goal, but also make history by bringing a state championship to North Desoto and this community. So winning a state championship means everything to me.”

North DeSoto received the No. 4 seed and a first-round bye in the Non-Select Division II playoffs. The Griffins host the winner of the Cecilia/Franklinton matchup next week.