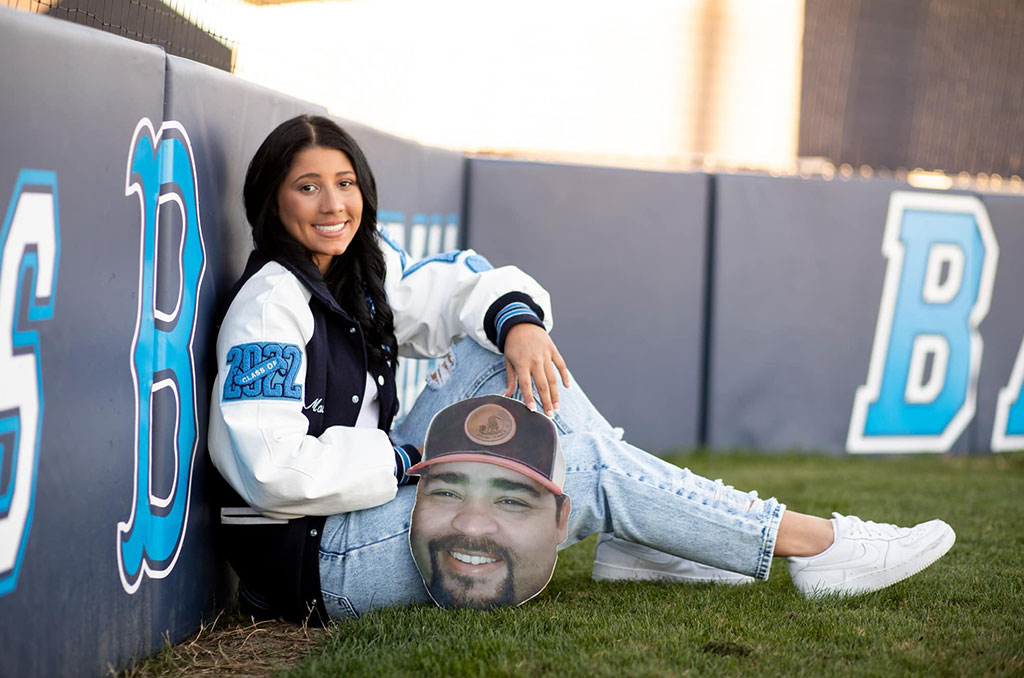 LAKE CHARLES – What is the meaning of a memory, when a memory is all that remains?

For Madison Chretien, an emotional embrace, with her father Jonathan following last year’s Class 5A softball state championship game provides an everlasting memory that fuels the senior shortstop to strive for greatness on and off the diamond.

On the afternoon of May 1, 2021, the Lady Buccaneers captured their first state championship since 1997. It was a moment frozen in time but the celebration was far from over. Chretien, who delivered a game-changing home run, was voted the game’s Most Outstanding Player after delivering an exceptional performance that included a home run.

With tears in her eyes and a moment of joy in her heart, Chretien looked to the one spot she would often seek out through the duration of most games. There, by the dugout, stood her father soaking in the moment. The two embraced shortly after to celebrate such a special moment.

“I always knew you could do it, Madison,” Jonathan exclaimed in excitement after hearing his daughter’s name called.

Jonathan, a former All-State performer in baseball and football at LaGrange and later a standout at Galveston College that played minor league ball made an early impact on Madison and her two younger siblings growing up. The former slugger spent his extra time teaching his children the importance of sports and always working towards a goal.

“With him going to play at such a highly-competitive level even though he didn’t get to finish always held a spot in my heart,” said Chretien. “I know that if my dad could do it then I can push myself to be just as great. He just played a very big role in my life. He was our rock.”

Madison eventually received the opportunity to join the softball team at Barbe. Due to a demanding work schedule, Jonathan was unable to attend every game. However, you could always find him standing next to the Lady Bucs dugout cheering on the team when not working. His presence lit up the diamond and the team quickly adopted him as one of the “team dads”.

It seemed as though the celebration and the realization of a state championship were neverending. The Lady Bucs were local celebrities with community organizations asking for their help in volunteering for events while government officials ranging from local all the way up to state level recognized them for their achievements.

All was right with the world for Madison and the rest of her squad until a cold day in December.

Chretien was preparing to leave for a family function when her two younger brother’s informed her that they had found Jonathan unresponsive in attempts to wake him. A cousin there at the house began to perform CPR while Madison looked after her brothers while emergency medical technicians were called to the house.

“When my mother arrived, she had me and my brothers wait outside while the paramedics began to work on my dad,” said Chretien. “After a while, I see them exit the house so I jumped out of the car to find out what was going on. My dad was my best friend and I wanted to know. As I approach the house, I make eye contact with my aunt who turned to her husband with tears in her eyes and at that moment I knew that he had passed.”

Paramedics worked to resuscitate Jonathan, who was suffering from a heart attack but were unsuccessful in their attempts to revive him. He was only 40 years old.

“It’s still hard to believe now that he is gone and it’s only been fourth months,” said Chretien. “That day is just something that will forever be with me but I know that if I continue to be strong and use softball as my outlet then I will be ok. If I am strong then my brothers will be strong.”

Devastated by the loss of her best friend, mentor, coach and most importantly her father, Chretien’s first call was to her softball coach Candyce Carter.

“I was getting ready to head over to my parents that morning when I received a phone call that stopped me in my tracks,” said Carter. “I am very close to that family and Jonathan was one of my good friends so I felt I needed to be there. Once I arrived at the house, I just hugged Madison just tried to support her and her family.”

Soon after, Madison’s teammates were informed of the loss of her father and one of their “team dads”. Immediately after receiving the devastating news, the Lady Bucs began to show support for their teammate and friend by offering support as Madison had done so many times on and off the field.

“I am very close to quite a few of these girls and are together every day, even outside of softball,” said Chretien. “They were there for me the moment that I called and were at my house. They are such a great group to be around and I was excited to share this season with them.”

“All of these players are like my kids,” said Carter. “I would die for them but Maddie is so special and her father was special. He cooked for us all the time and did support us so much. This is a great team. They are all just one big family.

Just one month following the loss of her father, Chretien stepped onto the softball field in preparation for her senior season with the Lady Bucs. Although at times it was difficult to not have her father around to ask for advice, the senior slugger discovered that her role was to encourage and back up her teammates, just as Jonathan had done with her.

“I feel like every time that I come to softball that I try to be the best version of myself,” said Chretien. “Each day, I give everything that I have and don’t take a pitch off even on my bad days. My teammates understand what I have been through and I feel that it’s important to show them that no matter what you go through in life you can always push through the hard times by taking things into your own hands. I will always push through.”

The lessons that Chretien was taught by her father early still run through her mind each and every time she steps up to the plate or makes a play out in the field. The true grit and determination that fans witnessed as Jonathan dominated the diamond resemble the play that you see in Madison when she faces adversity on and off the field.

“Madison is stronger than anyone that I have ever met in my life,” said Carter. You would never know that she sent through something like this by the way she proceeds in life every day. I wish I had multiple Madison Chretien’s on my team just because she is so strong and works hard every single day with no excuses.”

Chretien often takes herself back to that day in May of last year when she and her father shared her special moment of winning the award for most outstanding player after the state title game. It’s a memory that continues to push her to be the best.

“I think about that day all of the time and every day that I come out for a practice or a game,” said Chretien. “Those words exchanged with him are something that I will cherish forever, especially for softball, because that is one of the last special memories that I have with him when it comes to the sport. I just feel like that moment is what gets me through my bad days.”

Jonathan instilled in his children, especially his only daughter, that you can never give up despite what curveball life throws your way. The long conversations about putting in the work and always doing your best while being your best continue to flow through Chretien’s mind. Her father’s words can still be heard as she now takes his teachings and passes down his wisdom to those that Madison comes in contact with.

The Lady Buccaneers have enjoyed a company of monumental victories so far in the 2022 season as Chretien continues to play an integral part in her team’s bid for a consecutive state championship. And through it all, the team has an angel in the outfield looking on.

A sign hung in memory of Jonathan displayed on the outfield wall reminds each player and coach in every at-bat and on each pitch in the field that anything is possible.

For Madison, one proud father looks over his daughter in a robe decorated in Barbe colors as he cheers loudly for his best friend from heaven’s dugout.