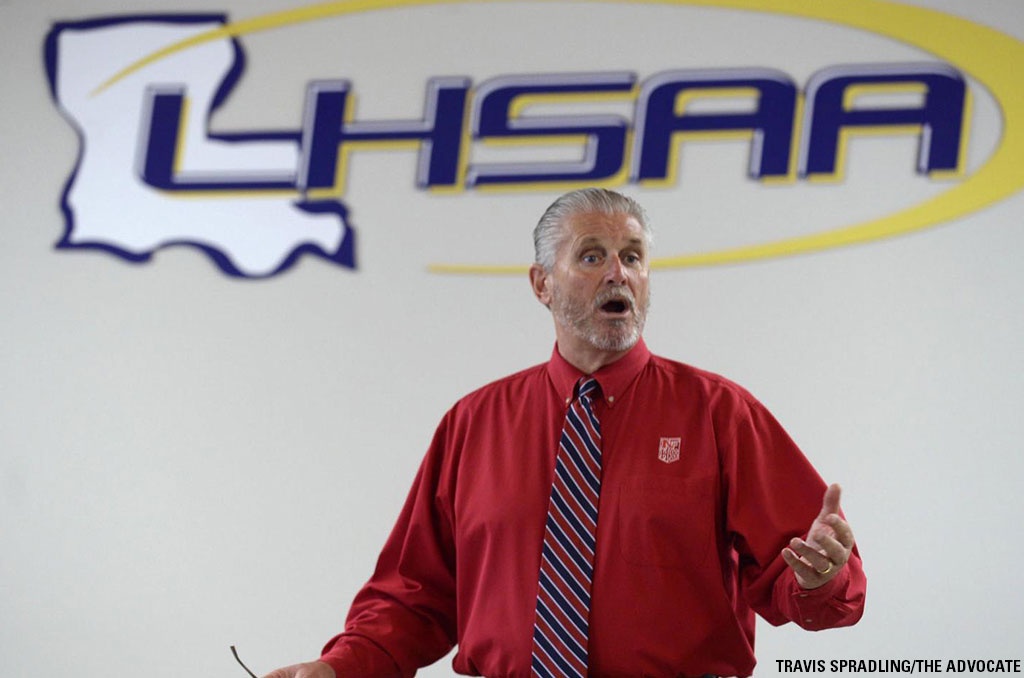 Credit is given to Travis Spradling/The Advocate for story cover photo.

In his opening statements, Bonine expressed the LHSAA’s full intentions to protect all involved, including student-athletes, coaches, officials or fans. He also noted that the LHSAA has been working alongside multiple statewide agencies to ensure that his organization is taking the necessary measures and is constantly receiving guidance as to how to proceed.

“Any and all requirements that have been set forth, we will follow,” said Bonine.” Anything that is approved in tomorrow’s BESE board meeting and in the future by Governor Edwards, we will follow religiously.”

Additionally, Bonine presented a timeline via a graph submitted to the Education committee with suggestions of which sport could participate in certain aspects of its seasons under certain phases.

The timeline, which member schools have been aware of for some time, serves as a guidance as to how certain sports can practice and play according to what phase it has reached.

One of the biggest items listed on the graph was the sport of football which could not begin until the state was in Phase Four of the reopening plan.

“We have got to get to Phase 4 if we want to play football,” said Bonine. “In Phase 3 of the specific graph provided, players can suit up and put on pads but there is still no head-banging and collision. It would be more about conditioning and getting ready for a season.”

The state of Louisiana is currently in Phase 2 of the reopening plan until July 24. Governor Jon Bel Edwards issued a mandate over the weekend requiring the wearing of face-masks as a preventive measure following a recent spike in COVID-19 cases.

Bonine reaffirmed that no permanent solutions such as canceling sports seasons or modifying those seasons have been determined by the LHSAA and its Executive Committee. However, he noted that the LHSAA is consistently communicating with its coaches association, officials association, advisory committees and others as to how the organization could proceed moving further.

“When it comes to what could potentially happen and what the seasons are going to look like, it all depends on when we can get students back to school,” said Bonine. “We are an education-based association and that is the most important part for me. We got to have education first and athletics not far behind.”

Following his opening statements, Bonine then entered a dialogue with members of the Education committee. Provided below are a few of the questions asked and answered:

Rep. Garofalo: I would like to clarify that the LHSAA is an independent association that is run solely by its members and not by outside agencies?

Bonine: That is correct.

Rep. Wright: Interested to know If there is a gap between the LHSAA and the limits that will be mandated on BESE tomorrow. Will you align yourself with what BESE has to do?

Bonine: Yes, as we will with any recommendation that comes out of the Governor’s office in regard to phases. We have always done that and we will continue to be that good neighbor.

Rep. Brass: In reference to the document passed out with guidance for opening, will the LHSAA provide guidance to where if a member of a school tests positive for COVID-19 and how spectators will be handled when attending athletic contests.

Bonine: Yes, we have been working with our Sports Medicine advisory committee and Dr. Greg Stewart. Collaboratively, working with the Department of Education (LDOE) … we will have that in place and will assist them in that process.

Rep. Brass: Have you had any discussions with switching sports seasons?

Bonine: There have been conversations  and a couple of proposals submitted to do so. However, that is not our first option. We are going to try and do what we can to get the seasons in.

Across the nation, there has been dialogue regarding the switch. As of today, I believe there is only one state that has decided to make that change and that would be New Mexico. I think they are moving football into February. Also, Pennsylvania is not playing anything at all until after Christmas.

We have not talked about flipping and there isn’t anything that is on the “front-burner” regarding that.

Rep. Thomas: The chart that you handed to us does not go into effect until the summer rules have expired?

Bonine: That is correct.

Rep. Edmonds: With the chart that you presented us, who put this formula together for you?

Bonine: There is a governing body that we are members of, the National Federation of High Schools (NFHS), who has a national sports medicine advisory committee. That committee has come together since February/March and put these recommendations together. In cooperation with that and using that as a “boilerplate” for us to look at what our state needs …. That is the document that you have today which comes from those medical experts.