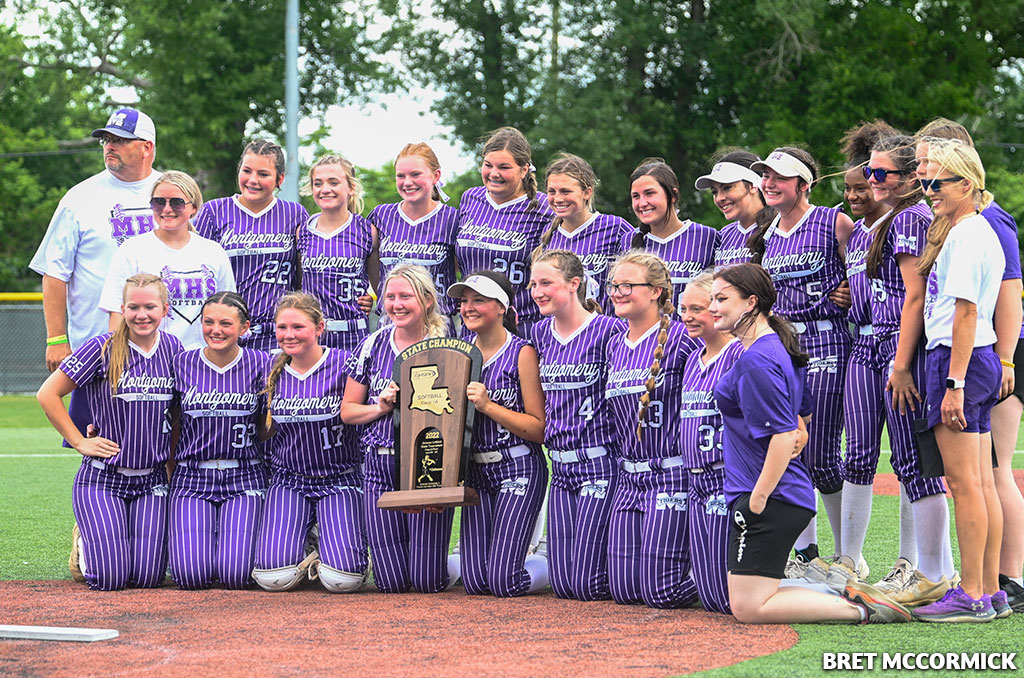 The Lady Gators secured their seventh state title in program history on Saturday with a 10-0 thrashing of West Monroe in the finals of the Class 5A state title game. It’s the first state championship for St. Amant since 2019, which is now tied for fourth all-time in titles won.

Boston College commit Addison Jackson could not have picked a better day for an exceptional performance inside the circle. The junior pitcher tossed a perfect game to help lead her squad to championship gold in five innings with four strikeouts. The Lady Gators also provided four home runs over the course of the title victory.

Seniors Carmen Dixon and Caterina Byars closed out their careers having won a total of 96 games with and two state championships in four years.

For a fourth consecutive playoff season, the John Curtis softball team captured the Division I state championship, using a fifth-inning double to storm back and take the lead and the gold.

With the game tied at 1-1, Jasmine Roach doubled on a 2-2 count, scoring one run while the Lady Patriots added two insurance runs in the next frame.

Pitcher Madison Laiche kept St. Joseph’s at bay with her outstanding pitching with two hits and one run surrendered in seven innings while having struck out 13 batters.

The Lady Griffins launched three home runs in the game adding to their total on the year which exceeds the century mark.

Buckeye found redemption Saturday after taking down top-seeded Iowa, 8-6, to bring home the Class 3A state championship. It’s the second title in school history for the Lady Panthers and first since 2012.

The playoff run was one of importance for head coach Justin Kees and his team as they looked to avenge a second-round loss to a lower seed in 2021. In their march back to Sulphur this season, they took down the No. 2 and No. 6 seeds to advance into the title game. From there, they took care of business with the upset over Iowa. It was the first time since 2017 that a No. 1 seed had lost in the 3A championship.

In a rematch of last season’s Division II title game, Archbishop Hannan came out on top once again in a 3-0 defeat over Haynes Academy.

It was the Hawk’s third consecutive championship and fifth in program history.

Tristyn Baugh was brilliant in the circle on Saturday, as she threw a no-hitter to help lead the Hawks to victory. She worked all seven innings, allowing zero hits on no runs while striking out six.

It was more of the same in Class 2A this season as the Many Lady Tigers captured their second consecutive state title with a 3-0 shutout over Port Barre Saturday.

Tia Holmes tossed a complete-game shutout with just five hits and no runs allowed along with six strikeouts. Camryn Ford provided a long ball shot in the third inning while Sara Kate Booker led the team with two hits in three at-bats.

For the sixth time in program history, the Notre Dame softball team is a state champion. The Lady Pios took down St. Charles, 6-4, to capture their fourth consecutive title.

Despite seeing its five-run lead whittled down towards the end of Saturday’s finals, the Lady Pios held on to claim the victory. St. Charles scored two runs in the sixth and one in the seventh to cut the lead down to just two runs.

Senior Corine Poncho tallied her 32nd home run on the year to help her squad pull away in the third inning on a 3-2 count, scoring two runs. Poncho and her teammates Abigail Savoy (24) and Maci Bergeron (16) have played an integral part in helping Notre Dame become one of the most powerful softball teams in the nation where they lead with 86 home runs.

History was made in the Class 1A state title game on Saturday as top-seeded Montgomery knocked off defending champion LaSalle, 8-3, to capture its first softball championship in school history.

The Lady Tigers scattered 11 hits in the game, scoring five of their eight runs in the first two frames.

Brighley Crayon picked up the win inside the circle where she allowed eight hits and three runs over seven innings while striking out three batters. Zoey Fitts led the hitting effort for the Lady Tigers with three hits in as many at-bats.

The Lady Cavs used 10 hits on the day, including multiple-hit efforts from three different players to capture their second consecutive championship and fourth for the program in a dominating 8-4 victory over No. 1 seed Opelousas Catholic.

Four of the 10 hits were results of extra-base hits for Calvary Baptist including a home run from D.J. Lynch and Tavia Leadon. Pitcher Kynzee Anderson took the win for the Lady Cavs, allowing seven hits and four runs over seven innings, striking out 12 batters.

If there is a crack in the Holden softball dynasty, it’s nowhere near visible to outsiders as the Lady Rockets claimed their fifth straight title in a 10-4 win over Anacoco Saturday.

Gracie Duffy led the hitting effort for the state champions having driven in four runs throughout the course of the contest including a home run in the first inning and another in the sixth.

Taylor Douglas surrendered four runs on nine hits inside the circle for Holden and struck out nine batters while giving up no walks.

Duffy and Maddie McDonald led the team with three hits apiece while the Lady Rockets totaled 13 hits on the day.

Haley Martin’s five RBI effort at the plate and one-hitter inside the circle was enough to help lead Calvin to an 11-1 win over Harrisonburg in Saturday’s Class C state championship game.

The win gave the Lady Cougars their sixth state title in school history and third consecutive.

Martin took the win after surrendering no runs on just five hits in the five-inning contest while striking out out five batters.

A nine-run explosion in the fourth inning of Saturday’s Division V state championship softball game was enough to drive Claiborne Christian past Northside Christian for its third straight title.

Annacate Miller provided an excellent effort inside the circle with just one run allowed on two hits in five innings.

The Lady Crusaders racked up 10 hits in the game with Annabelle Russell and Lily Wainwright each turning in multiple-hit efforts.