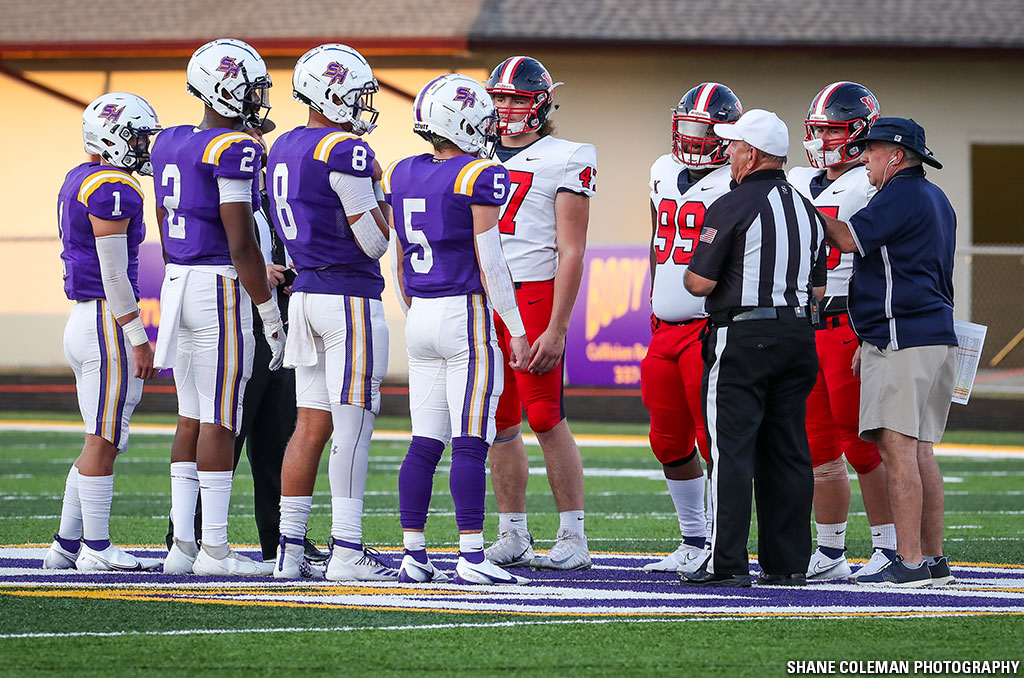 One of the most interesting match-ups in the Lafayette area this week will not be highlighted by a district championship. Instead, St. Thomas More welcomes Class 5A East St. John to Cougar Field for what is to be an intense showdown. The Cougars currently sit at No. 5 in the Division II power ratings and a win on Friday would guarantee a home game in the first round of the playoffs. Two bonus points for playing up in class would also help STM in its bid for a third consecutive state title. On the flip side, the Wildcats are fighting for a spot in the Class 5A bracket. East St. John currently stands at No. 32 in the power ratings with only the top 32 teams earning a postseason bid. A victory for the Wildcats would help to propel them further into the playoff field. Both squads have a ton to play for Friday night and neither can afford to lose.

Belaire had won only eight football games prior to the start of the 2021 season. On Friday, the Bengals will have a shot to win a district title. Head coach Byron Wade has done wonders for the Baton Rouge program since his arrival. The six wins are the most for the Belaire program since the 2015 season as the Bengals currently sit 13th in the Class 4A power ratings with a first-round home playoff game hanging in the balance. To achieve a program milestone, Wade and his Bengals will have to get past a talented Liberty program, who is in its first season as a varsity program. The Patriots have won four of their last five and have posted three shutouts on the year. One of the best contests in the state will definitely be rocking from Olympia Stadium on Thursday night. You don’t want to miss it.

In what could be one of the most offensive heavy contests around the state this week, Red River makes the trip down to take on Avoyelles in District 3-2A action. The Bulldogs are hope to stay inside the Top 10 of the Class 2A power ratings while Avoyelles hopes to grab the No. 2 seed heading into the postseason. The Mustangs have rolled since a Week 7 loss to district leader Many where they have outscored the opposition, 80-18. Red River dropped a tough one to Class 3A Loyola Prep last week and hopes to rebound with a major upset over the talented Avoyelles squad. This is a potential playoff rematch waiting to happen if the dominos fall in the correct spots.

Despite having to forfeit five games and sliding down the Division I power ratings, Brother Martin is more than determined to finish out the regular season by making a statement win over John Curtis. The Crusaders are 7-0 on the field and hope to make some headway in the playoff seeding. The Patriots have scored wins in their last two Catholic League outings and a win over Brother Martin would give Curtis a much-needed boost headed into the postseason. As in any rivalry game, throw out the record books and sit back and take it all in. This will be a good match-up.

It’s finally here. The Ruston-West Monroe rivalry game will be played after a two-year hiatus due to the pandemic. The Bearcats are primed and ready for what could be its biggest game in recent memory while the Rebels hope to throw a monkey wrench into the District 2-5A district title picture. Many believe that Ruston had a chance to take down West Monroe last year before COVID related issues forced the game to be canceled. Will the Bearcats be able to take down its rival at home or will West Monroe use that tradition pixie dust to slide by into the postseason. Again, this could be another playoff rematch waiting to be played.

The Claiborne Parish Super Bowl. The Game. The longest high school football rivalry in Louisiana. No matter what it’s called, the Haynesville and Homer rivalry game is one of the most anticipated games each season. It has become a hot rivalry once again with Homer starting to rebuild its program into a respectable name while the Golden Tornado hopes to keep the magic alive. Homer took a win in the series for the first time in 10 years when it defeated Haynesville last season. The Tors are hoping to exact revenge on enemy turf in this year’s edition of the rivalry. And to make the contest more enticing is that both squads are both ranked inside the Top 10 of the Class 1A playoff power ratings.

The Spartans are on a roll and don’t plan on stopping now with seven consecutive wins in their back pocket as they enter the District 9-4A title game with Lakeshore Friday night. Despite a 4-4 record on the year, the Titans are still a team not to take lightly and this game gives them even more fuel as a win could mean a home playoff game. Salmen is in prime position for a great playoff run as a top 5 seed. Both squads have prepared for this slobber knocker by scheduling strong opponents in non-district play. Will it be enough to push Lakeshore past the favorited home team and into a home playoff spot?

With a victory on Friday, Rosepine can seal the District 5-2A title and a top 10 playoff seed as it continues one of its best seasons in school history. The Eagles consistently putting up points while staving off pesky opponents. It’s only loss to Logansport, who holds the No. 1 seed in the Class 1A power ratings, looks even better and could help the Eagles should the Tigers win. DeQuincy hopes to come in and ruin the regular season finale with a win giving the Tigers a share of the district title. It won’t come without its challenges as DeQuincy has dropped two of its last five, including a loss to Kinder two weeks ago. Expect some explosive plays in this match-up as Rosepine quarterback Ethan Frey hopes to lead his squad to a district title.