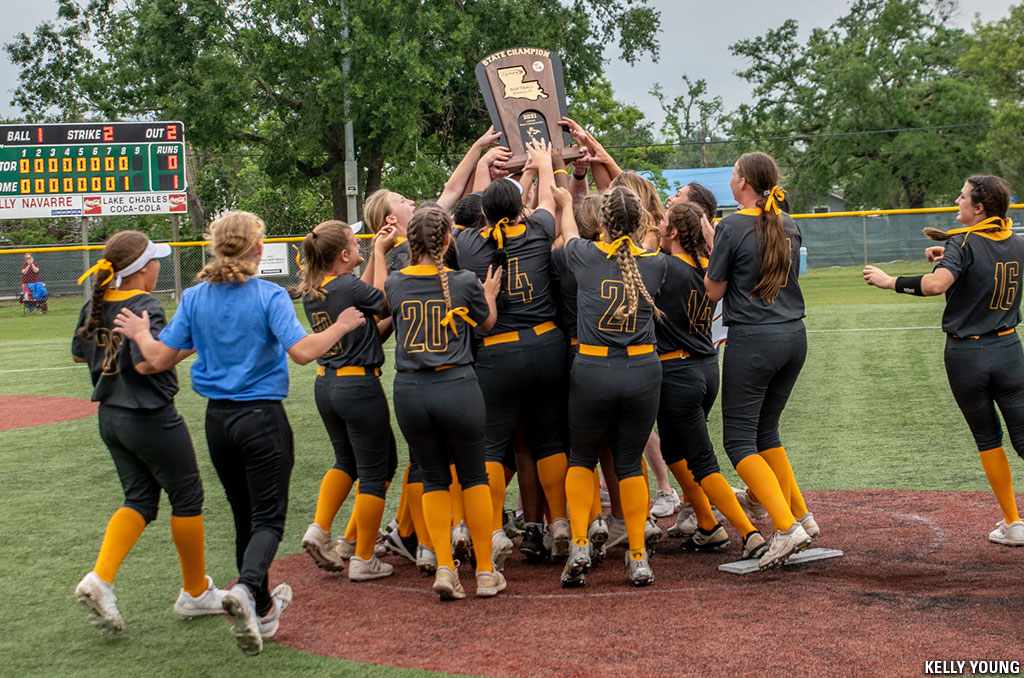 A very memorable season in sports comes to an end

The 2020-21 school year, full of question marks because of the Covid19 Pandemic, has come to an end and every coach, school administrators and faculty are sure glad that is all now in the past.

A year that held no promises of whether any games would be played rolled right along after a bit of a slow start and was full of  uncertainty, canceled games and rescheduled games but thankfully champions were honored.

Here is recap of all those who made it memorable starting with football which got under way a month later than originally scheduled but got it all in by the end of the calendar year. Byrd finished the regular season 8-0 winning District 1-5A and was the no. 3 seed in the Division I playoffs. The Yellow Jackets defeated St. Augustine (31-14) and John Curtis (14-13) to reach the finals before falling to Catholic-Baton Rouge (35-12).

Many also went undefeated in the regular season with a 7-0 mark. The Tigers started the playoffs with a pair of forfeit wins before knocking out Amite (34-30) and General Trass (83-36) enroute to the state 2A final. The Jess Curtis led Tigers came away with a 16-13 defeat of Kinder to capture the Class 2A title.

Calvary went 5-2 in the regular season and entered the Division IV playoffs as the no. 1 seed. The Cavaliers took out three playoff opponents on their way to defeating Ouachita Christian 62-41 for the division championship.

Cross Country didn’t produce any state champions, however Joslyn Crosby from Parkway was third in girls Class 5A and

Garrett Sepulvado of Calvary finished second in 1A boys.

Individual state swimming champions were Brooke Fegley of Captain Shreve who won both the 50 and 100 free, and Lillian Tichenor finished runner-up in the 100 breast in girls Division I. Caddo Magnet had two winners in the girls Division II. Sophie Weiner took the 100 free and Evelyn Zhang the 100 back.

Soccer had some successful finishes locally but no one was able to claim a title. Loyola’s girls and Benton’s boys came away with state runner-up finishes. The Lady Flyers finished runners-up to University 1-0 in Division III.

Boys basketball saw Natchitoches Central, the no. 1 seed in Class 5A, fall to no. 3 seed Zachary in the state final, 63-57. Woodlawn had a good run until losing to McMain 50-48 in the 4A semifinals. Lakeview reached the 2A semifinals before losing to Port Allen 60-48. Arcadia, no. 4 seed in 1A, took out White Castle 51-38 to claim the championship. Class C no. 6 seed Ebarb fell to top-seed Simpson 73-65 in the title game. Calvary, the no. 3 seed in Division IV, fell to top-seed Crescent City 59-49.

Girls basketball had Captain Shreve knock off defending 5A champion Benton for its second state title in three years. Huntington, the 2 seed in 4A, dropped a 49-42 decision to no. 1 defending-champion LaGrange. Class B Florien Lady Black Cats finished as a state semifinalist losing to Fairview 61-45. Gibsland-Coleman, the top-seed in Class C, lost to no. 4 Reeves 45-34 in the semifinals.

Many won the boys powerlifting title in Division IV and Calvary was runner-up in Division V. Calvary’s girls took the Division V state title, edging past Cedar Creek by a point.

Softball state champions included North DeSoto in Class 4A, Many in 2A and Calvary in Division IV. The Lady Griffins blasted Beau Chene 13-7 for the 4A title. Many was two runs better than Doyle (4-2) in 2A while the Lady Cavs got an eighth inning run to defeat Catholic-Pointe Coupee 1-0.

Airline knocked out top-seed West Monroe in the 5A state semifinals 3-1 before bowing to Barbe in the final 3-1. Florien bowed out in the B semifinals to Holden 12-11. In the Class C semifinals Ebarb lost to Calvin 14-4 and Summerfield fell to Georgetown 9-3.

Nobody was able to claim a baseball state championship, but Byrd got to the finals in Division I before dropping a 6-1 decision to Jesuit. Calvary made it to the semifinals before bowing out to Opelousas Catholic 4-3 in eight innings.

Parkway announced this week Jay “Sham” Shamblyn Gabehart would be replacing David George as its baseball in a release by the Bossier School Board.

Gabehart moves north after a one-year stint as pitching coach at Zachary. Previous to that Gabehart spent a couple seasons as head coach at Dunham where he was named the district coach of the year in 2018 and 2019.  He was head coach at South Terrebonne the three season before going to Dunham.

George led Parkway to a 19-10 overall record and 7-7 in District 1-5A this past season and was 31-6 in 2019, taking the Panthers to the state semifinals for the first time since it won a state championship in 1998 under coach Ronnie Coker.