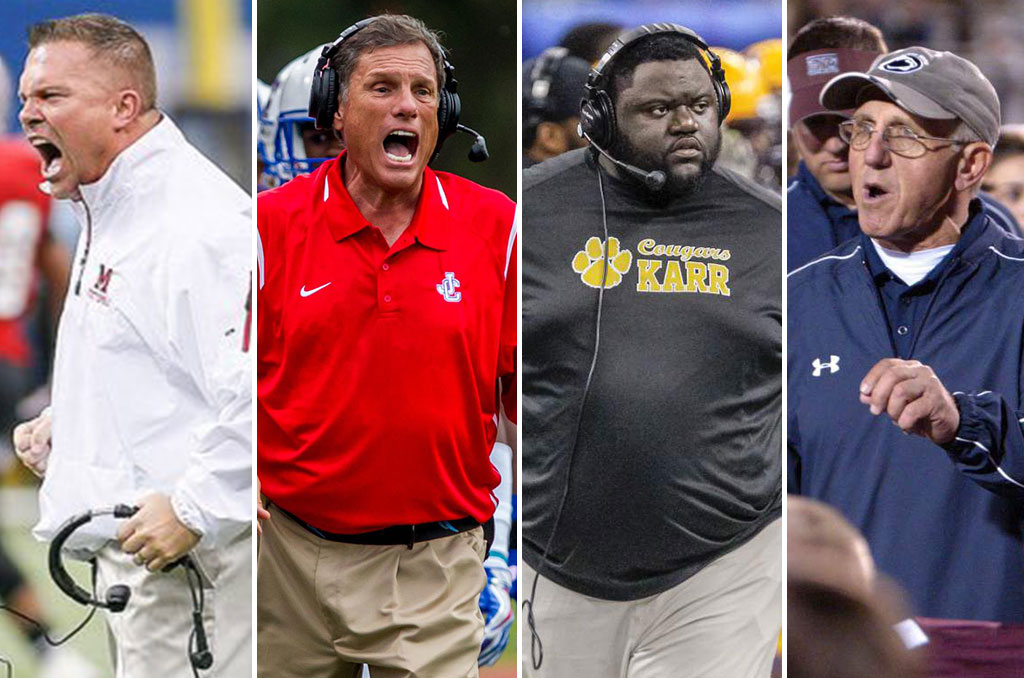 Note: The below list was compiled using statistics and a formula based on the length of time that a coach has spent with a program and what he has accomplished while there. No human element was used in determining these rankings. This is also not a list of all-time great coaches.

Who has the best coaching resume in Louisiana high school football right now?

A case could be made for a number of coaches from around the Pelican State. It takes dedication, tenacity, determination and sometimes… a bit of luck. With that said, a select group of coaches top this year’s inaugural “Top High School Football Coaches in Louisiana”  list.

Coaches were primarily rewarded for the length of time spent perfecting their craft at the current school as well as the dedication it takes to build a program and maintain a certain standard of excellence.

There are certainly more coaches deserving of this honor and we will update this list each year before the start of football season.

One thing is for sure… if a coach on the below list has not earned Hall of Fame status… he will eventually.

J.T. Curtis, Jr. certainly needs no introduction when talking about high school football in Louisiana. The Hall of Fame coach, who is just eight wins away from becoming the first high school football coach to reach 600 victories, has made the John Curtis Patriots a national powerhouse. He has recorded all 592 of his wins with the school, founded by his father, since its first season in 1969. On top of that, he has led the Patriots to 27 state titles, a Louisiana record, and has mentored 150 all-state players. His 2012 team was named National Champions following a 14-0 season capped by a 35-13 state championship win over Evangel Christian.

Lewis Cook, Jr. has established a dynasty at Notre Dame where he first took over in 1997. Since then, his Pioneer football squad has not slowed down, winning four state titles in 10 appearances. Cook has won nearly 88% of his games as head coach at Notre Dame while adding 67 all-state selections to his coaching resume. Cook was inducted into the Louisiana Sports Hall Of Fame in 2018.

Jim Hightower is highly-respected among his coaching peers for his work of turning the St. Thomas More Cougar football team into one of the most talented in Louisiana. Hightower, who took over the program in 1986, has won two state championships with the Cougars and amassed 325 victories. His 34 years coaching at the same school is the second longest in the state, only behind J.T. Curtis who has coached at John Curtis for over 50 years.

A strong work-ethic and a tireless determination has enabled Ouachita Christian mentor Steven Fitzhugh to get the best out of his teams. After taking over the program in 1998, Fitzhugh rose quickly, earning his first state championship just two years later. Since then, he has led the Eagles to four more titles. He has 205 career victories, all with Ouachita Christian, and is just one of 10 active coaches who have won over 200 games and is still coaching.

It’s always tough to fill the shoes of a legend. Haynesville head football coach David Franklin had no problem taking the reins from his father and legendary coach, Alton “Red” Franklin in 2002. David has established his own legacy while keeping the winning tradition alive in Haynesville. Franklin has led the Golden Tornado to 181 victories and three state titles in 18 years. He’s recorded over a dozen 10-win seasons during his tenure and has coached 19 all-state selections.

Frank Monica has done well wherever he has coached. The same can be said during his tenure with the St. Charles Comets, where he has 192 victories in 21 years with the school. Monica has led the Comets to five state championships, leading his 2011 squad to the school’s first championship. Monica’s 30 all-state selections proves one thing and it’s that he knows how to win and how to establish a program. No one is slowing down Monica who is primed to lead his Comets to another deep postseason run.

Rusty Phelps took over the Jennings football team  in the mid 1990’s and has made it into a respected program across the state. In 25 years with the school, Phelps has led the Bulldogs to 23 state playoff appearances, including 15 consecutive years dating back to 2005. In 2019, the Bulldogs advanced to the Class 3A state championship game, the school’s first since 1992. Among his 198 victories with the Bulldogs, Phelps has also helped mentor 10 all-state selections including All-American and National Champion running back Travis Etienne.

Jess Curtis quickly gave the Many Tiger football team a unique identity when he became head coach over a decade ago. His well-coached squad is not mistaken for a program to overlook but instead to fear as you enter into battle. In his time with the Tigers, Curtis has wrapped up 105 victories along with a state championship in 2014. He has led his program to finals appearances two others times as well while also grouping 17 all-state selections. Curtis has made Many into one of the winningest programs in the last decade and does not seem to be slowing down anytime soon.

David Brewerton has done nothing but win since first stepping onto the field at Zachary High School six years ago. The veteran coach has led the Broncos to state titles appearances in three of the six seasons defeating teams such as West Monroe, John Ehret and Hahnville. On top of that, Brewerton has averaged 12 wins per season and has mentored 13 all-state selections. If a continued run of success continues at Zachary, expect Brewerton to enter into the Hall of Fame as soon as he hangs up his whistle.

Perhaps the most successful coach within the last decade deserves to be towards the top of the list. If he continues to lead Edna Karr to state title appearances as he has done the last five consecutive years, he will be a lock for a Top 5 appearance and a Hall of Fame nomination. Brice Brown’s run as the head man at Karr is no doubt impressive. He has never missed a state championship weekend in New Orleans since taking over the program in 2015. In fact, his last four trips have all resulted in championship victories. Brown’s average win mark ranks towards the top as well, averaging nearly 13 victories. Brown is no doubt the future when it comes to coaching dynasties in Louisiana high school football. He will be in good company as he continues to get better.