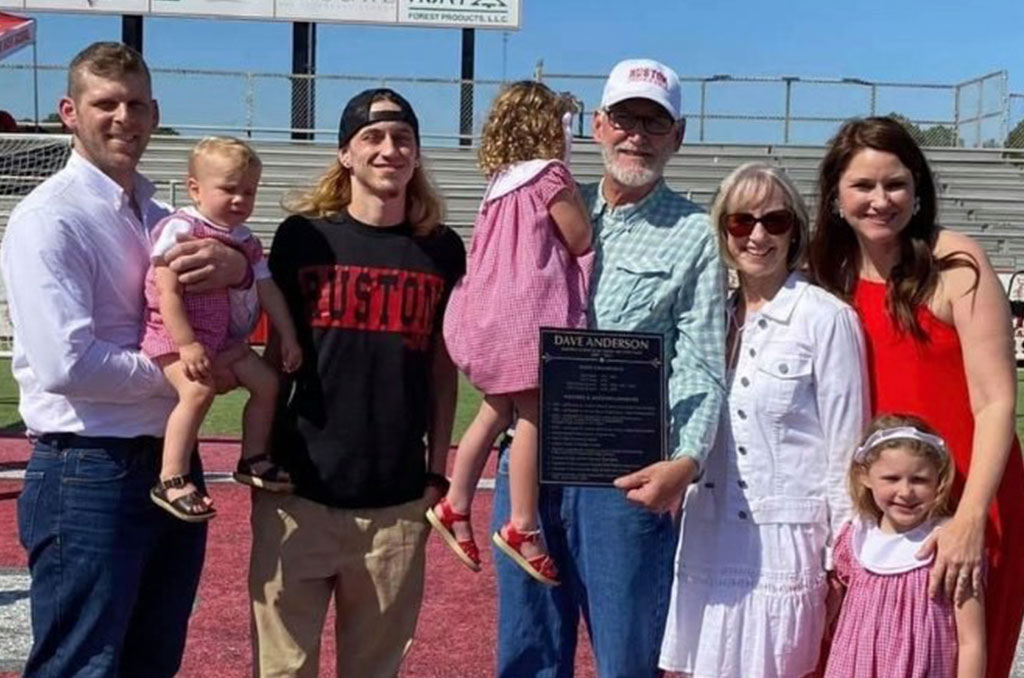 RUSTON – In 1993, David Anderson, who was then the head track and field coach at Ruston High School, went to the family of legendary Ruston coach L.J. “Hoss” Garrett. Anderson asked for their permission to rename Ruston’s meet in honor of their father. The family was more than appreciative of Anderson’s efforts to honor their father, who won four state track and field state titles and three football state championships during his 38-year coaching career.

Every year, the day before the “Hoss” Garrett Relays, Anderson and his Bearcats would walk over to Greenwood Cemetery behind the stadium bearing Garrett’s name. Once there he reminded his athletes why it was important to honor Coach Garrett’s dedication to Ruston High School and the community.

“Ask any Bearcat who lived those moments if it was an emotional time during their high school track and field career,” Anderson wrote on a recent Facebook post.

Friday, it was Anderson’s turn to be honored as the Ruston Cross Country and Track and Field program led the formally recognized Anderson’s own legendary career by naming the track in his honor.

Anderson, who now coaches at Bentonville (Ark.) West, led his teams to nine state titles, 22 state runner-up finishes, and 24 straight district titles in a career which spanned over two decades.

As if that wasn’t enough to celebrate, the Bearcats also honored their 2020 State Indoor Championship team as well as their 2021 State Indoor Runner-Up team.

“Today was an awesome day,” Ruston head coach Allen Whitaker said. “It was great to see all of the Bearcat faithful, young and old. Dave Anderson is a legend in these parts. It was an honor to share the same airspace with him and continue to build upon the great foundation that he set at Ruston High.”

Several years ago, one of Anderson’s former Bearcat runners, Todd Boddie, convinced him to move to Bentonville and join him in  Northwest Arkansas. Boddie was on hand Friday afternoon to watch his alma mater honor his former coach.

“He means the world to all of us,” Boddie said. “Whether you were best in your field or you were last, he treated us all the same. The culture that he brought. The brotherhood. The tradition that he brought to the school. It was amazing and one of the best memories of my life.”

“Humbled, honored, and blessed,” Anderson responded when asked what it meant to him to have his name on the Ruston track where he coached hundreds of young men and women.

“I never…ever…imagined that something of this magnitude would be the outcome,” Anderson said. “I’m thankful beyond words.”

The Lady Bearcats were led by Zoie Holstead (800 meters), Jada Williams (400 meters), Corlasia Scott (300 hurdles), Tyra Fields (200 meters), and Lily Garrett (3200 meters) on the track. All won their individual events. Tyana Jackson was the only other winner, taking gold in the long jump with a mark of 15’10.5.

Byrd was led by the only double winner in the girls division. Senior Christanna Kirksey won the discus (106’11.5) and shot put (34’0.5). Both marks for Kirksey were personal records. Kirksey’s teammate, Caitlin Byrd, added 18 points for the Lady Jackets in the throwing events, finishing second in both the discus and javelin.

Ouachita set the pace in the relay events in the girls division winning both the 400 meter relay (50.25) and 1600 meter relay (4:04.83). Three Lady Lions (Chastity Brown, Tyreonna Puckett, and Danielle Lee) were on both winning relay teams.

Ruston’s girls 800 meter relay continued their domination in the event, lowering their own school record to 1:39.46. The time is currently ranked No.5 in the nation.

In other meets around North Louisiana…

Like Ruston, Parkway won both the girls and boys division of the Bossier Relays held at Benton High School on Friday.

“Coach Kennady and I are excited to see the direction our program is heading in, winning both divisions of the Bossier Meet,” Parkway head coach Kent Falting said. “Our girls medaled in 17 of 19 events which is incredible.”

Sophomore Mikaylah Williams, who was the District 1-5A MVP in basketball, was one of the Lady Panthers who impressed Coach Falting the most. She continued her undefeated win streak in the girls discus with a throw of 109’.

The Lady Panthers also picked up 18 points in the girls javelin. Chloe Larry won the event with a throw of 112 feet. Panther soccer standout, Peyton Pipes, who signed with ULM earlier in the week, came in second.

In the boys division, Parkway’s Jaylan White won 100 meters against some impressive competition. In only his second meet of the year, Dariusz Patterson scored huge points for the Panthers in the long jump and triple jump.

“Our team showed their potential and hopefully we can keep building from this,” Falting said.