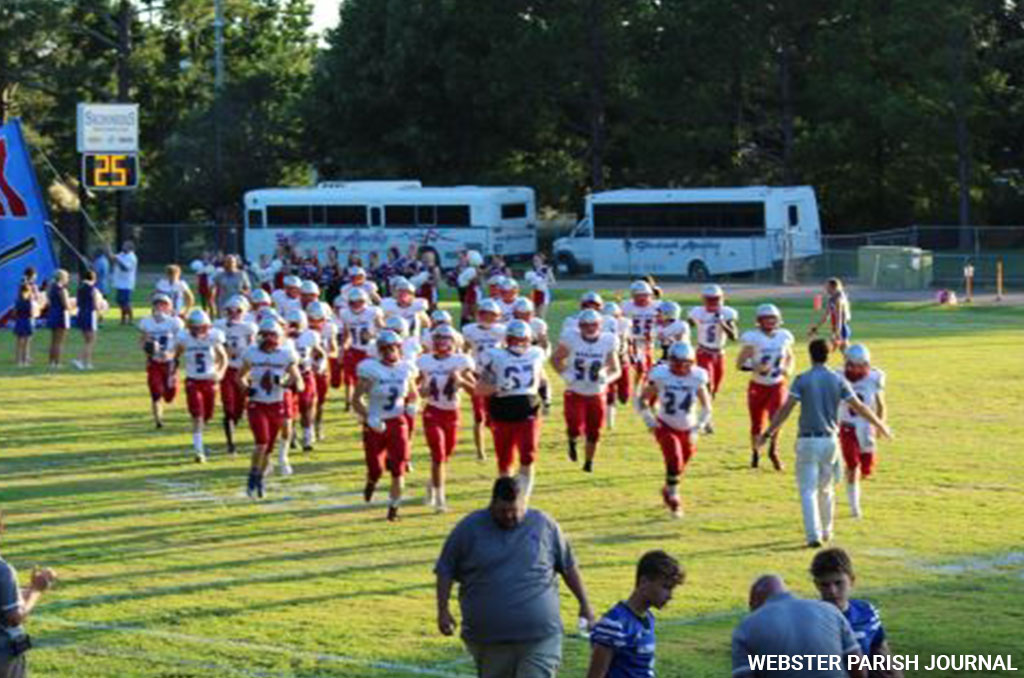 The Glenbrook Apaches won their first LHSAA playoff game this past Friday with a 42-21 score over the Catholic of Pointe Coupee Hornets. The atmosphere at Glenbrook was amazing. Being able to host a LHSAA playoff game is something head coach David Feaster hopes becomes an annual event.

Coach James Thurman and the Apache defense played great against the Hornets and the triple option. This Friday’s opponent in Ouachita Christian (OCS) is a top team that is very well coached and always in the hunt for a state championship. OCS has been to 3 straight state championship games, factor in the extra practices OCS has gotten the past three years with making it to three straight championship games, the players almost have a full extra season under their belts. Just like Coach Feaster has said on the Tim Fletcher show, getting to play deep into the playoffs gives you more time with the players and more practices.

Coach Thurman was quoted “If you can make it to Thanksgiving and are still practicing football, you must be a pretty good team. Well, here we are, so we must be a pretty good team. So now we just have to go out and play to our ability and show why we are 11-0. We definitely have a punchers chance in this one”. Coach Thurman’s defense will have to be ready to play this Friday. Hayden Harmon, Landry Powell and Maddox Mandino will have to go out and do what they have done all season…. Make great plays. Maybe my favorite player to watch is big #55 Garrett Brown. He plays like a wild man and is all over the place. The entire defensive line unit is impressive. With Luke Vining and Daivari Jackson, the unsung hero’s of most football teams are the D Line and O Line.

Defensive Line Coach Patrick Thomas said “Coming into the game against Catholic Pointe Coupee we knew they were physical, liked to run the ball and we knew we would have to play solid for 4 quarters to advance to this week match up with OCS. Coach Thurman does a great job putting our guys in the right place on defense and makes it easy for his defensive staff to coach the players up and that’s been very enjoyable this year. Looking at OCS you see a lot of skilled guys running around on offense and their coaches do a great job at distributing the ball all over the place. Coach Thurman has put together a defensive plan and its our job to make sure our position players know whats going on and they have to execute. OCS does a lot of good things and we look forward to Friday night”.

The Glenbrook Apache’s pushed their season record to 11-0 and the Louisiana High School football current winning streak to 17 in a row. The OCS Eagles have a streak of their own. According to Mr. Jake Martin with The Ouachita Citizen, the OCS Eagles are 28-0 since naming their field after their current Head Coach, Steven Fitzhugh. One of these streaks will come to an end Friday night.

Glenbrook’s offense will try and test the OCS defense with junior QB Ty Feaster throwing to the receivers like Turner McLelland and Cason Clemons. The Apache’s are not just a throwing team, they can run the ball as well with DJ Carter and Chase Sentell. None of this would be possible without the offensive line. With guys like the Vining brothers, Spencer Brantley and Jackson Lott protecting T. Feaster and opening up holes for the running game the Apache offense has been able to be very productive.

The OCS Eagles are just a quick trip East to Monroe on I-20 for the Glenbrook fans, so expect a large crowd at OCS. The game will be at 7:00 pm Friday at OCS stadium. Tickets are $12 and you can get them at the gate.