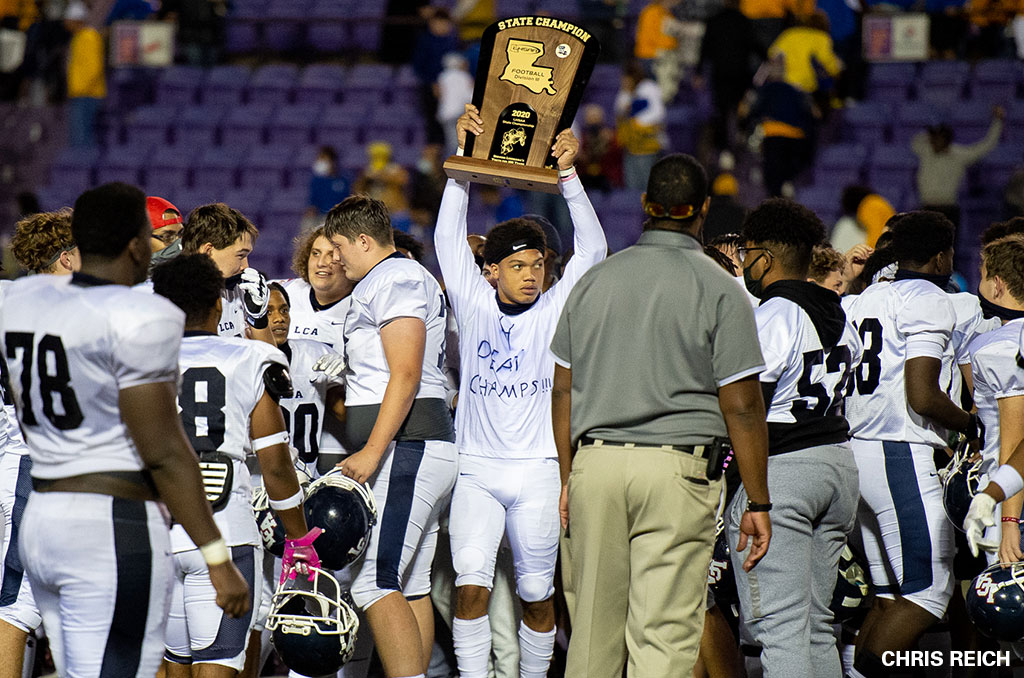 Can Trev Faulk and his mighty Knights do the unthinkable Friday night? The Catholic Bears have been near untouchable through the first four games this season, holding their opponents to just 10 points per game. Lafayette Christian, behind the arm of QB JuJuan Johnson, looks to cut through nationally-ranked Bears on their way to a fifth consecutive title. It won’t be without a fight as both squads look to remain undefeated amongst their No. 1 rankings. This game could come down to the final possession.

Liberty Magnet enters Friday’s District 7-4A contest with confident swagger. To be honest, why not? The Patriots are undefeated and are averaging over 53 points per game. However, what awaits them on the other sideline is a hard-nosed football team determined to shut down a rolling offense that has plagued its opponents. A tougher strength of schedule could prepare the Indians for a showdown that could play a key factor into how the district finishes.

District 3-2A has two key matchups that will play a big factor early in the season. The first is the undefeated Avoyelles football team hosting Winnfield Thursday evening. Behind stud running back Carlos Bazert, who is averaging over 10 yards per carry, the Mustangs continued to roll through some tough early season competition. Avoyelles has scored 174 points in its last three ballgames, including 86 against Carroll. Winnfield hopes to slow down Bazert and the rest of the Avoyelles offense as it has done to its last several opponents. The Tigers ran into a hot Red River squad last week that could have helped prepare for another tough assignment in Week 5.

The two oldest Catholic schools in New Orleans renew their rivalry Friday night with Jesuit and Holy Cross facing off in the nation’s fifth oldest continuous prep rivalry. Both programs are coming off disappointing but close losses and look to even their district record in the challenging Catholic League. The Blue Jays’ Ryan Manale and Holy Cross Nic Saltaformaggio hope to pick up their first win in the historic rivalry as head coaches. Throw out the record books and stats out of the car on the way to this game. None of that matters in a good ole’ rivalry.

This is what high school football is all about. A pair of schools separated by only a few miles meeting up to do battle for ultimate supremacy and bragging rights in northeast Louisiana. West Monroe and Neville face off Friday night with both teams fully motivated. The Rebels look to keep rolling following a convincing win over Woodlawn of Baton Rouge while the Tigers hope to avenge a loss to St. Thomas More in the closing minutes of last Friday’s ballgame. Neville has not beaten West Monroe since 1995 which adds a bit of fuel to an already explosive rivalry game.

It doesn’t get any better than Many and Red River when it comes to small-town high school football. Expect a packed house Friday night as the home crowd hopes to serve as that essential “12th-man” for their Bulldogs. Many comes into the game riding a lengthy district winning streak and is determined to extend it Friday behind the likes of tailback London Williams and QB/LB Tackett Curtis. Red RIver’s Tre Smith looks to lead his squad to a victory in what is perhaps the program’s biggest game in recent years.

Donaldsonville has cruised through its first three games this season with only 24 points surrendered. The Tigers will face its toughest threat thus far as it enters the hallowed grounds under the water tower at Kentwood High School. The Kangaroos play different at home and expect their competition to bring its “A” game.

The beautiful town of Vacherie, Louisiana will be rocking Friday night as the Edna Karr Cougars make their way to town for a date with the town’s beloved Wildcats. Expect everything but the kitchen sink to be thrown by each team to the other as both battle to remain undefeated and garner power points. The Cougars have taken down two Class 5A squads while St. James has defeated opponents in higher classifications. A ton of talent will highlight the game and neither side will disappoint with its explosive playmaking.

Westlake is 4-0 to begin the season for the first time since 2010 and is not looking for complacency now. Head coach John Richardson leads his Ram squad back to the place where he won a state championship just a few short years before starting his tenure in Westlake. Richardson served as the head coach at Welsh and led the Greyhounds to a state title win. Now his former assistant, Cody Geuringer, leads the program and is eager to face off against his old boss. Both teams have won their last three games with Welsh undefeated at home. A standing room only situation is expected at Welsh Stadium so get your tickets early.

Other Top Area Games: B.T. Washington (NO) at Washington-Marion; Lafayette at Sulphur; Pineville at Iowa; Westgate at Lake Charles Prep