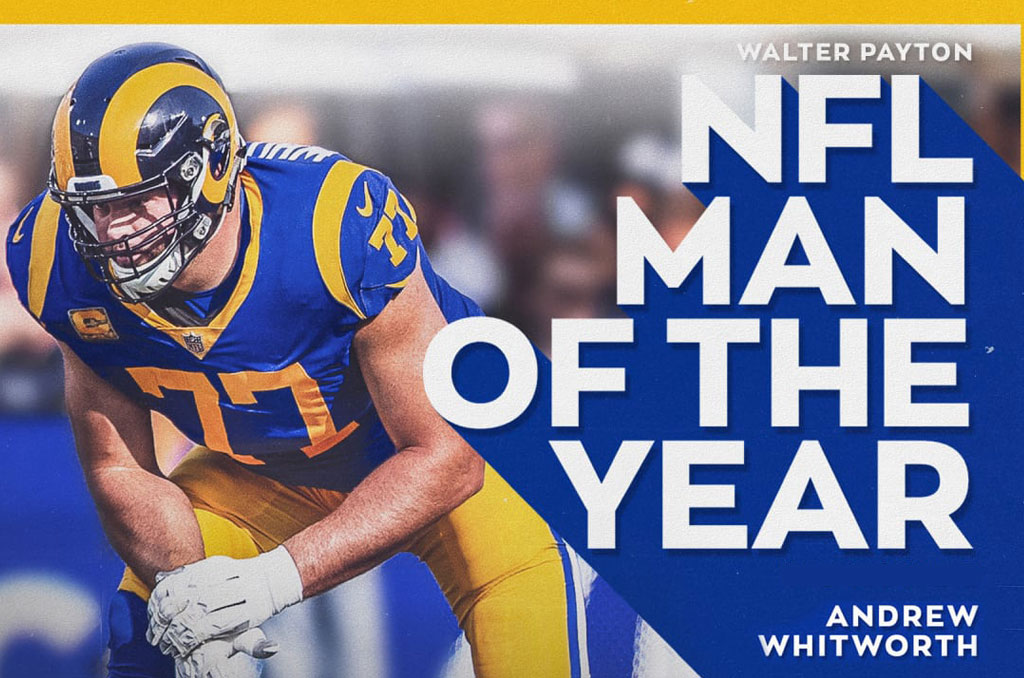 Over 16 NFL autumns, Andrew Whitworth has blocked the best of the best and played left tackle at a Pro Bowl level.

During that time, he’s likewise left an indelible mark on local communities.

Just days before he’s set to play in Super Bowl LVI, the big man with the big heart received the NFL’s most prestigious tribute when Whitworth was named the 2021 Walter Payton NFL Man of the Year at Thursday’s NFL Honors in Los Angeles.

Typically the last award of the evening, the Walter Payton NFL Man of the Year is presented to a player in recognition of his “outstanding community service activities off the field, as well as excellence on it.”

“This award, though, has been about players who are great on the football field, but live with their hearts off it,” Whitworth said Thursday in his acceptance speech, which brought tears to the eyes of many of the NFL’s biggest and toughest stars. “They made their time in the NFL about more than just the stats they put out on the field, but how they lived off of it. I’m humbled, I’m honored to stand up here and represent the outstanding class of 2021 nominees and all of the previous winners.”

While Whitworth expressed gratitude for claiming the NFL’s top honor, he used his platform to call for more action when it comes to giving back, imploring his league brethren to invest in helping others.

The 40-year-old Whitworth is set to become the oldest starting offensive lineman in Super Bowl history when his Rams face his former squad, the Cincinnati Bengals, and on Thursday became the first Rams player to win the award since its inception in 1970. Whitworth is also the first offensive lineman named Man of the Year since the Baltimore Ravens’ Matt Birk in 2011.

Whitworth launched the Big Whit Homes for L.A. Families program at the beginning of the season and pledged to donate $20,000 after each Rams home game. He also made donations to repair homes in his home state of Louisiana and moved Angelenos facing housing insecurity into affordable homes. In addition, Whitworth works with non-profits in L.A. to aid people in paying rent, buying groceries and offers support for down payments and the furnishing of home. When Hurricane Ida hit Louisiana in August, Whitworth parented with Rebuilding Together to assist with essential home repairs to damaged homes.

As the Walter Payton MOTY, Whitworth receives a $250,000 donation to the charity of his choice.

Should Whitworth and Los Angeles prevail in the Super Bowl, he’ll be just the fourth player to win the award and the Super Bowl in the same season, joining Johnny Unitas (Baltimore Colts, 1970), Joe Greene (Pittsburgh Steelers, 1979) and Joe Theismann (Washington, 1982).

Regardless of what happens in the Super Bowl, though, Whitworth was the biggest winner on Thursday.

“So, keep investing, lead with your heart and I can’t wait to watch the legacy continue,” he said in closing. “Remember this, it’s a blessing, not a burden, to carry on this NFL legacy.”

Whitworth joins Warrick Dunn (2004), Peyton Manning (2005) and Eli Manning (2016) as the only LHSAA alumni to earn the prestigious honor.