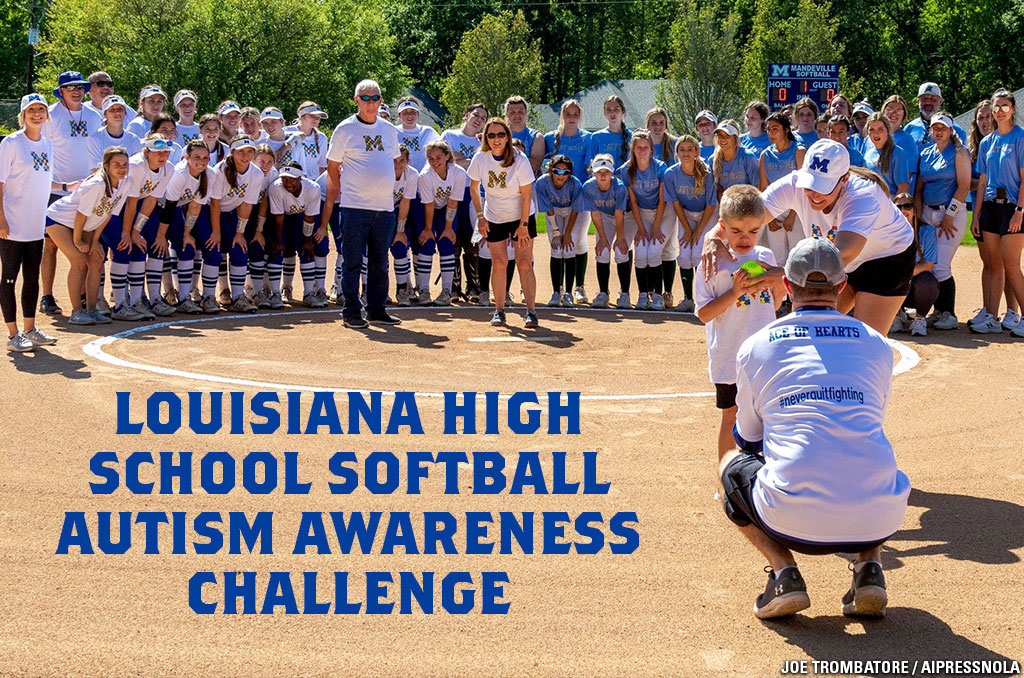 LAKE CHARLES – All eyes were on Asher Bergeron as he stepped on to the diamond Monday prior to the start of Mandeville’s home softball contest against Ponchatoula.

It was his time to shine.

Asher, who was diagnosed as nonverbal autistic early in his life, was invited to toss the first pitch concurrent with the Louisiana High School Softball Autism Awareness Challenge.

His father, Trevor Bergeron, an assistant coach at Mandeville, stood by his son’s side as they threw out the first pitch together. Asher’s ceremonial toss was a true sign of courage and showed that even those who endure hardships can be a source of inspiration for even the strongest of souls.

“Autism Awareness is near and dear to our heart at Mandeville,” said Skipper head coach Kim Nunez. “Coach Bergeron is a great leader in our school community and a great dad to his son.”

Since Asher’s diagnosis, Bergeron has been an advocate for autism awareness. He started the Ace of Hearts Foundation with the goal to help his son. However, the foundation has grown and is now geared towards helping families of individuals with autism or special needs.

“Our mission is to grow the community acceptance and provide support and encouragement to children with autism and special needs, as well as their families,” said Bergeron.

The challenge was started by high school softball programs around the state to help shed light on the fight for autism awareness and to help grow support for local and statewide charities.

The John Curtis softball squad sported custom t-shirt jerseys with Louisiana covered in the puzzle piece pattern while Slidell had custom stickers made for their batting helmets.

The Lutcher Lady Bulldogs held a benefit for their local charity while inviting some special guests to attend the game in honor of Autism Awareness month.

“Our team was able to raise $1,516 towards the Autism Awareness Challenge and it was great to see so many high schools across the state participate in such a great cause,” said Lutcher head coach Cathy Bland.

“The Lady Comets are very happy to be able to shine a light on Autism Awareness month,” said a team representative.

Many teams had the chance to inform their communities of a local or statewide charity they could support by either volunteering their time, donating to that organization or spending time with a family who may need help.

Representatives from several squads who discussed the Autism Awareness Challenge had one goal in mind. However, in the end, unbeknownst to everyone involved, two goals were accomplished.

The original goal to inspire communities to take part in advocating for Autism Awareness was achieved.

The second, and perhaps greater goal, was that a father had a chance to share a special moment on the field of competition that he loves so much.