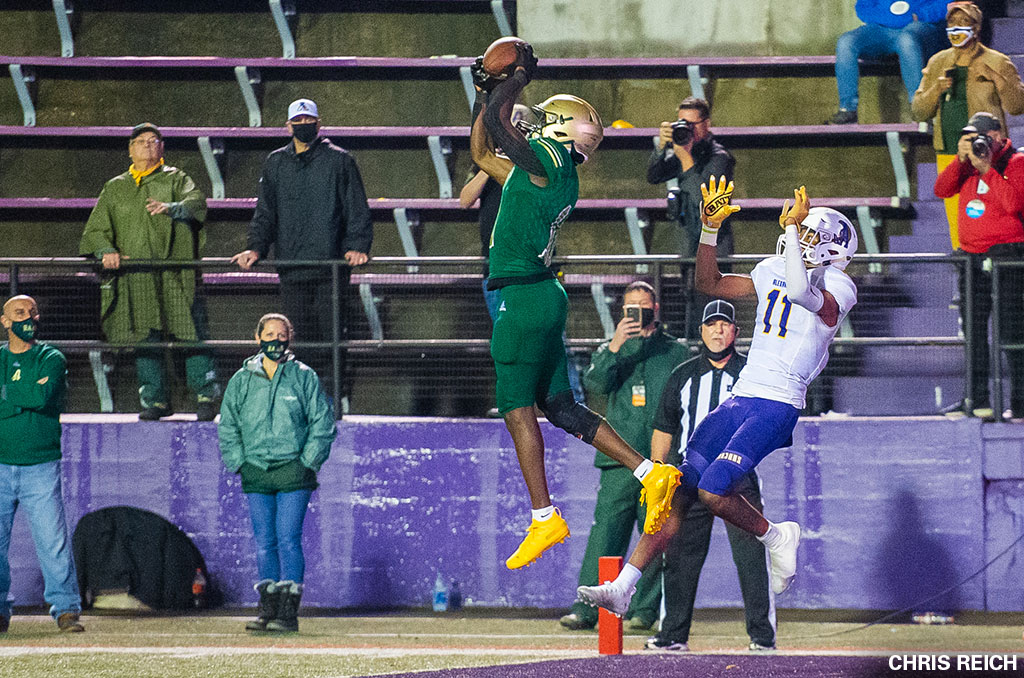 NATCHITOCHES – It was a war. The two top teams in the state’s highest classification went toe-to-toe for 48 minutes but it was the Wreckin’ Rams of Acadiana who came out victorious in a 35-34 win over Alexandria to close out the 2020 LHSAA Prep Classic.

Alexandria Senior High won the toss and deferred to the second half. Acadiana began their opening drive on their own 20. The 12- play drive culminated with a one-yard touchdown run by Tyvin Zeno. The drive took up almost half of the first quarter.

The Trojans were unable to get anything substantial going on their opening drive, and had to settle for a punt after picking up a couple of first downs..

Fumbles were the story of the second quarter. Acadiana put the ball on the ground twice.

On the first fumble, ASH was able to drive down the field but missed an opportunity to capitalize when a 35-yard field attempt went wide right.

On the second fumble for Acadiana, which came at the center-quarterback exchange, ASH was able to take the lead–Ironically enough–with a fumble of their own.

Alexandria runningback, Jarvis Newton was stopped short of the endzone when an Acadiana defender knocked the ball out and Trojan wide receiver Treyv’on Culbert was able to recover it and run it the remaining two yards across the goalline.

The Rams answered with a seven play, 69-yard drive which culminated with Tyvin Zeno’s second touchdown of the game, a five yard run. Ram quarterback Jerimian Brown ran it in on a two point conversion to the give the Rams a 14-7 lead with four minutes to go in the half.

Later in the quarter, Culbert found himself on the other end of a turnover when, after catching a pass in ASH territory, Acadiana’s Walter Bob  hit Culbert and knocked the ball loose. Bob also recovered the fumble, giving the Ram offense the ball at the ASH 18.

Acadiana took advantage of the miscue, scoring on a 4-yard bootleg pass from Jerimiah Brown to Kevan Williams. Jesus Martinez’s PAT was good giving the Rams a 21-7 lead which they took into halftime.

Both teams got defensive on the first two possessions of the second half, both going three plays and out.

ASH began to find its offensive rhythm on their second possession, putting together a seven-play, 63-yard drive which ended with a 25-yard touchdown pass from Judd Barton to Abu Kamara.

Acadiana answered with a clock-eating 57-yard drive of their own which ended with a two yard Omiri Wiggins touchdown run. Martinez’s PAT was good, giving the Rams a 28-14 lead with 1:20 left in the third quarter.

Both teams traded punts at the beginning of the fourth quarter.

Then, a little later in the quarter, it got a little crazy. Alexandria scored their first of three touchdowns on a Jarvis Newton carry for a two yards. Rajun Valdes PAT was good, making it 28-21 with 7:11 left.

Acadiana answered, mounting a 4-play, 49-yard touchdown drive which was capped with Wiggins 35-yard run. Martinez’s PAT was good as the Rams had a little breathing room with a 35-21 lead with 3:10 left.

But the resilient Trojans weren’t finished just yet.

On Fourth and ten from the Acadiana 37, Barton threw a pass which was tipped in the air by an Acadiana defender and grabbed by Trojan wide receiver Graham Vaughn who raced into the endzone to give the Trojans a pulse.

Alexandria’s onside kick was successful, and Barton led the Trojan offense back down inside the Acadiana redzone when he connected with TJ Johnson on a 16 yard fade. That score made it 35-34 Acadiana.

Another onside attempt was recovered by Acadiana, as the Rams won their second consecutive 5A title and sixth overall.

“All I can say is I guess the championship game in 2020 couldn’t end any other way. I have a lot of respect for Alexandria. They played about as hard as you can play. I’m just proud of our guys finding a way to pull it out in the end. (On ending) It was crazy. They made some plays to give themselves a chance to win. (on ASH offense finding a rhythm in the second half) We had a little trouble getting to the quarterback. Their quarterback is a good football player. He is a three-year starter. He did the same thing to Zachary at the end. He made some plays against West Monroe, which is two good defenses. I thought we played pretty well on offense except for the turnovers, but they made it tough.”

“I’m usually not short on words. I’m proud of our kids. One thing I’d like to communicate is that I’m incredibly proud of our kids. They’re heartbroken. You invest so much into each other. You invest so much into a season. There is a lot of emotion that has poured out of us for the last few weeks. You try to get people to understand where that comes from. It doesn’t come from winning a ball game. These three sitting next to me haven’t worked hard for a week. They have worked hard for an entire career. To be honest, we felt like we should have been here. We came up a little bit short. We came up a little bit short tonight, but the fight, the character, the integrity…I told them when I talked to them in the locker room when we come out of this room we have to stay glued up. We have to stay together. Just really proud of the kids.”