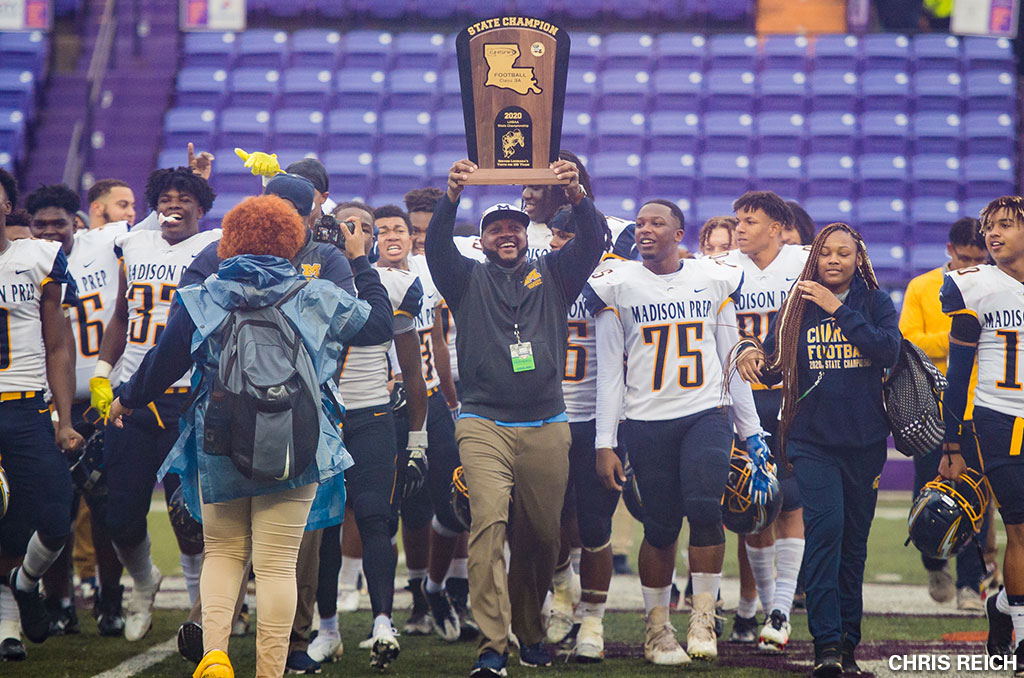 NATCHITOCHES – The Madison Prep Chargers dominated in Wednesday’s Class 3A State Championship where they blanked Union Parish, 50-0, to win their first state title in program history.

Union Parish won the toss and deferred to the second half. Madison Prep went 76-yards in 16 plays eating up 5:17. The Chargers, who had the ball first and goal at the Union Parish 6, overcame two penalties which put them with a second and goal from the Farmers 21. Madison Prep quarterback Zeon Chriss set up the touchdown with a 19-yard run, before scoring on a two yard run on third down. The PAT was no good.

The Farmers came within six feet of answering the Chargers, but a mishandled exchange between Union Parish quarterback Cole Dison and sophomore running back Trey Holly, who had a 35-yard kickoff return and rushed for 36 of his 39 first quarter yards on the drive.

On Madison Prep’s next drive, Chriss’ first big play came on a third-and-nine when he hooked up with Tyrell Raby for 15 yards, but it paled in comparison to a 72-yard strike to Marlon Smart on third and four from their own 28. Chriss ran the ball in on Madison Prep’s two point attempt to give the Chargers a 14-0 lead with 2:47 left in the quarter.

It was more of the same for both the Madison Prep offense and defense.

Midway through the quarter, Chriss connected with Brian Chapman on a 26-yard jailbreak screen to cap a nine play, 63-yard drive which took four minutes off the clock.

Towards the end of the first half, as the rains started to fall on the turf at Turpin Stadium, Chriss continued to find Charger wide receivers open in the Union Parish secondary.

The next touchdown came on a 24-yard post to Tyrell Raby with 2:58 left in the half. The two connected again on the two point conversion to give the Chargers a 30-0 lead.

Madison Prep’s defense was equally effective, batting down a Union Parish pass at the beginning of the second quarter, forcing a Farmer punt. The Chargers’ Royon Davis ended the defensive efforts in the second quarter with an interception of Cole Dison’s pass.

Chriss and the Charger offense mounted a drive which went 53 yards to the Farmer 22, but Madison Prep simply ran out of time.

Desperation began to set in for Union Parish. The Farmers fourth and ten fake punt attempt was unsuccessful and gave Madison Prep a short field.

The Chargers took advantage of the miscue, scoring on a seven yard Myles Poullard run to extend Madison Prep’s lead to 38-0.

Unicorn Parish mounted their most impressive drive since their first of the game, but turned it over on downs when their second fake punt of the quarter was unsuccessful and Chargers took over on downs at their own 19.

Both teams turned the ball over as the rains at Turpin Stadium continued to impact the play.

With 3:20 left in the game and tornado sirens going off on the Northwestern State campus, the referees talked to both coaches and send the teams inside. Their was some confusion among players and media that the contest was over.

It was later learned that Union Parish head coach Joey Spatafora asked his team in the locker room if they wanted to play the final 3:20. It was a resounding yes.

The teams returned to the field, and Madison Prep was able to finish the game with a Tony Lewis 15-yard touchdown as time expired to give the Chargers a 50-0 shutout win in the Class 3A Championship.

“I’m not going to say it was revenge, but when we played  Union Parish last year, we weren’t on all cylinders. Today, we really wanted to make a statement with a healthy Madison Prep team clicking on all cylinders. Well, the goal is to push for perfection. We had some games where we scored 50, 55 points–whatever, but it still wasn’t our best game. We walked away feeling like we didn’t play our best game. Today, we came out. The guys really wanted it. When I got on the bus this morning, I looked in their eyes, and I knew they were ready to play.”

“On our end, I don’t think we played as physical as we could. We were a little lackadaisical. I think we had effort and gave 100 percent. Execution is a big part of the game. We didn’t execute and they did. (on third downs) That was big. We just didn’t do a good job of getting off the field, and they took advantage of it.

Completed nine of 16 passes for 202 yards including three touchdowns. Chriss also rushed for 121 yards on 20 carries including a rushing touchdown.