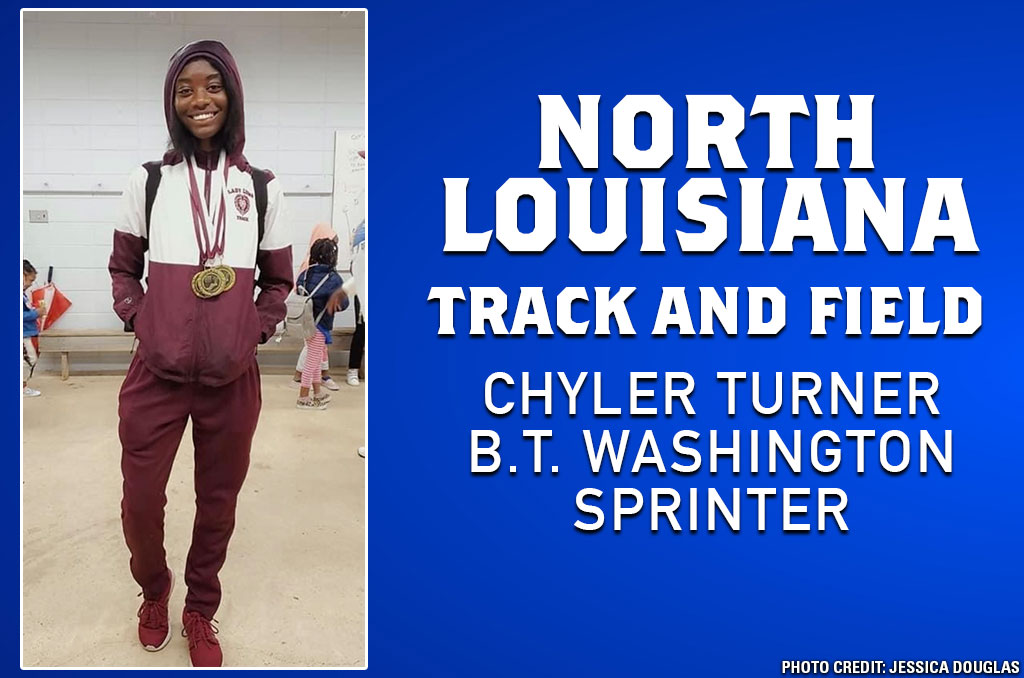 SHREVEPORT — Since coming onto the Louisiana track and field scene in 2019 by winning three outdoor state championships as a sophomore, BTW’s sprinter Chyler Turner has displayed a knack for making remarkable performances look incredibly easy.

Thursday night at the Wesley-Payne Relays, Turner, competing at Lee Hedges Stadium during the regular season for the final time, did it again with personal records in all three of her events.

The fastest hurdler in Louisiana came right back and won the 100 hurdles with a time of 14.02, .14 faster than her previous best this season.

With those gold medals around her neck and little competition to push her, one would expect a bit of a drop off in her final event of the evening–the 200 meters. Instead, she lowered her personal record by .61 seconds–cruising to a 24.43.

Turner’s time in the 200 meters Thursday night moved her from No. 7 in the state to No. 2 behind John Curtis’ Raven Nunnery. It also moved her into the Top 10 Caddo-Bossier all-time list, which is headlined by Huntington’s Teresa Foster’s Class 4A record of 23.75, at No. 9. Byrd’s Kyah Loyd, who led Byrd to a state title in 2017, ran a windaided 23.70 at the state meet, but has a wind legal high school best of 23.98.

There was no rest for the weary, Turner put her warm ups on and headed over to join her Booker T. Washington seniors for a brief “Senior Night” ceremony.

“It’s surreal to me that that’s it,” Turner said. “My last home meet..and it is heartwarming that I could run my last meet with my Lion Family.”

Turner credited BTW head coach Erica Wynne and her pre-meet motivational talks as well as her summer track coach– SPAR’s LaMark Carter for the time they have invested in her.

“She (Coach Wynne) really helped me get my mind together before I come out and compete,” Turner said. “And, honestly, without Coach Carter there would be no Me. I am grateful for him.”

While she still has unfinished business to take care of over the next three weeks of the championship season in high school track and field, Turner is excited about the next chapter of her life which will include attending Duke University on a full track and field scholarship.

C.E. Byrd took home the team title in the girls’ division, scoring 148 points. It was the first parish championship for the girls’ team since 2014.

The Lady Jackets were led by senior Christanna Kirksey, who won the discus with a personal record 110-5 and finished second in the shot put. Other Byrd girls to come away with gold medals were Bryn Peters (1600 meters), Ella Price (pole vault), and freshmen Jenna Key (3200 meters). Peters’ time of 5:29.18 in the 1600 meters breaks her own school record in the event.

The only other double winner in the field events was Northwood’s Cameron Foster in the boys’ shot put (46’8) and discus (128’6.5).