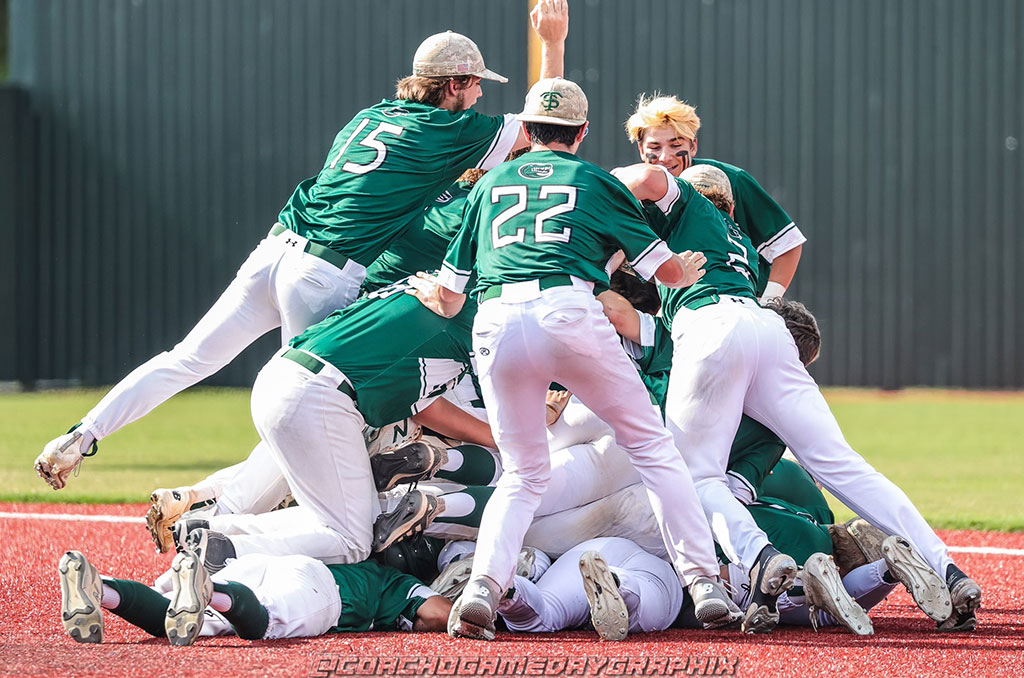 Big innings played a huge part in Saturday evening’s Class 5A baseball championship contest but it was the West Monroe Rebels who reveled at the end as they rallied from six runs down to defeat St. Amant, 9-6, for its first state title since 1999.

Trailing by one run and with frames dwindling down, the Rebels needed a boost and got one as Ole Miss commit Hayden Federico missiled a line drive into centerfield, driving in three runs to give West Monroe its first and most important lead of the game.

An error on the next play scored Federico, giving the Rebels a 9-6 lead that would hold until the final out.

Federico led the offensive effort in the game for West Monroe with two hits and three RBIs. Brennan Eager entered in relief for the Rebels and picked up the win after tossing 4.2 innings and allowing no runs and just one hits while striking out six batters.

St. Amant got out to an impressive lead in the first inning of the game thanks to a Lee Amedee home run to start the contest to put the Gators up 1-0. From there everything was going the right way for the lower seed as five more runs were scored off of singles and wild pitch.

The Rebels mounted a comeback with five runs to pull within one of the lead after in a third inning that was highlighted by Caleb Ross’ grand slam that seemed to change the momentum of the game.

The back-and-forth game was shaken up in the bottom of the sixth inning as the Patriots scored three runs in the bottom half to go up by two over South Terrebonne. It seemed as though the magic had run out and that North Vermilion would repeat as champions.

However, a two-out, three-RBI double from Drake Detillier in the seventh drove in the go-ahead runs to give the Gators a 6-5 lead and therefore keeping them in the game. The magic run wouldn’t come to an end as North Vermilion plated a run in the bottom half to tie it up and send the game into extras.

Next turn for the win was Jackson Martin’s and he took full-advantage as he slammed a double that pounded the right-field wall, sending in a run to score and again giving South Terrebonne the lead by a 7-6 score.

The Gators were able to close out the game with a pair of strikeouts and a fly-out as the team piled up to celebrate history as they earned the right to bring home the big trophy and celebrate.

Bryce LeJuane picked up the win for the Gators with 2.2 innings of work and one run allowed on one hit with two strikeouts.

A grand slam from Lutcher’s Brock Louque in the third inning of Saturday’s Class 3A state championship game sealed the Bulldogs first title win in eight years after taking down No. 1 Berwick, 5-4, at McMurry Park in Sulphur.

Louque was responsible for all five of Lutcher’s runs in the game and led the team with two hits while Cohen Veron also hit twice for Lutcher.

Noah Detillier earned the win for the Bulldogs with four runs on nine hits over 4.2 innings, striking out five. Jordan Bailey had the biggest outing on the mound as he thwarted a last inning offensive attack from Berwick to pick up the save by recording the last three outs.

The Panthers went up 3-1 in the bottom of the second inning highlighted by an RBI-double from Mason Johnston.

However, Louque went yard in the top of the third frame driving in the four runs needed to take the lead and eventually secure the victory.