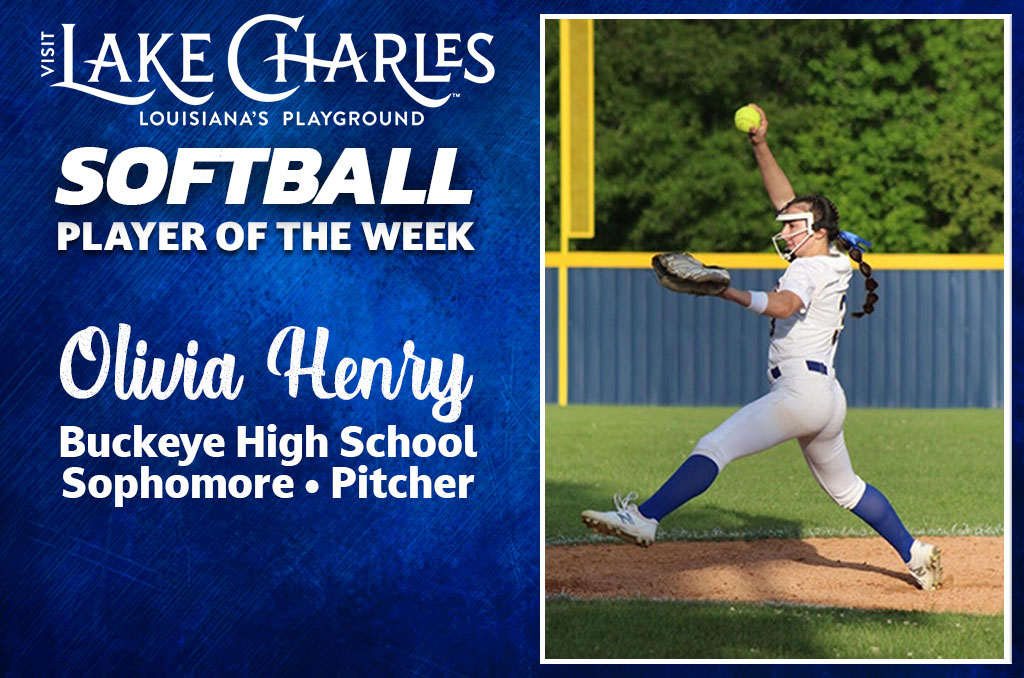 Henry led the Lady Panthers to a 4-3 extra-inning win over 2021 Class 4A semi-finalist Tioga Friday night. Henry pitched nine innings, finishing with 136 pitches, seven strikeouts, one walk, and 3 earned runs. At the plate, she had the game-winning walk-off single in the bottom of the ninth inning.

Sophomore Elena Heng helped lead her Lady Vikings team to a 3-0 record on the week, outscoring opponents 37-5 in the process. Heng batted 5-for-7 with a home run and two triples that helped drive in three runs while plating nine runs herself. She finished with a .846 on-base percentage.

In a 10-inning showdown against Hahnville, both squads had their chances to plate but fell short. However, the determination and fighting mentality of the Gators proved to be enough as Addison “AJ” Jackson launched a solo home run in the top of the 10th inning to bring home the victory. In addition to her performance at the plate, Jackson took the win in the circle after lasting 10 innings where she allowed just one hit and struck out 22.

Junior Sarah McDaniel had an exceptional week at the plate where she helped her team to a 4-0 start to the season. She batted .667 with 10 hits, including a double and a home run, slugging .933 in the process. She drove in 12 runs throughout the four-game stretch and also earned a 1.7 ERA in 16 innings of work.

The North DeSoto third baseman went 6-for-11 with a double and three home runs to help lead the Lady Griffins to a 3-0 start to the season. She drove in five runs and scored six from the lead-off position in wins against Class 5A foes Ruston, Haughton and Natchitoches Central

Pappion turned in a great performance both at the plate and in the circle last week, hitting 7-for-12, including three home runs and 10 RBI. In 12 innings of work, she struck out 20 batters, 13 in a single game against Calvary Baptist. Against Sam Houston, she hit 3-for-4 including a home run along with three RBI.

Parker was magnificent inside the circle during the opening week where she earned a 2-0 record along with a 1.5 ERA and 13 strikeouts. She tossed a no-hitter on Opening Day and struck out 10 batters along the way. Offensively, Parker batted .833 in two games with two doubles, a triple, a home run and seven runs scored.

Alexis Roach has been dealing with numerous amount of injuries since her freshman year but that did not stop the Lady Rebel pitcher. She helped her squad to an undefeated record in the first week of the season, including two shutout wins. Roach batted .714, including two homers in seven at-bats while helping to shut out Natchitoches Central in her first full game pitching.

Kylie Ryan helped lead Minden to its best start in almost a decade over the last week with an 11-for-14 performance that included 19 RBIs, four home runs and nine stolen bases. In the circle, she pitched 22 innings and earned four wins and a save in addition to a 2.86 ERA. The Crimson Tide pitcher has given up only nine earned runs and has recorded 35 strikeouts.