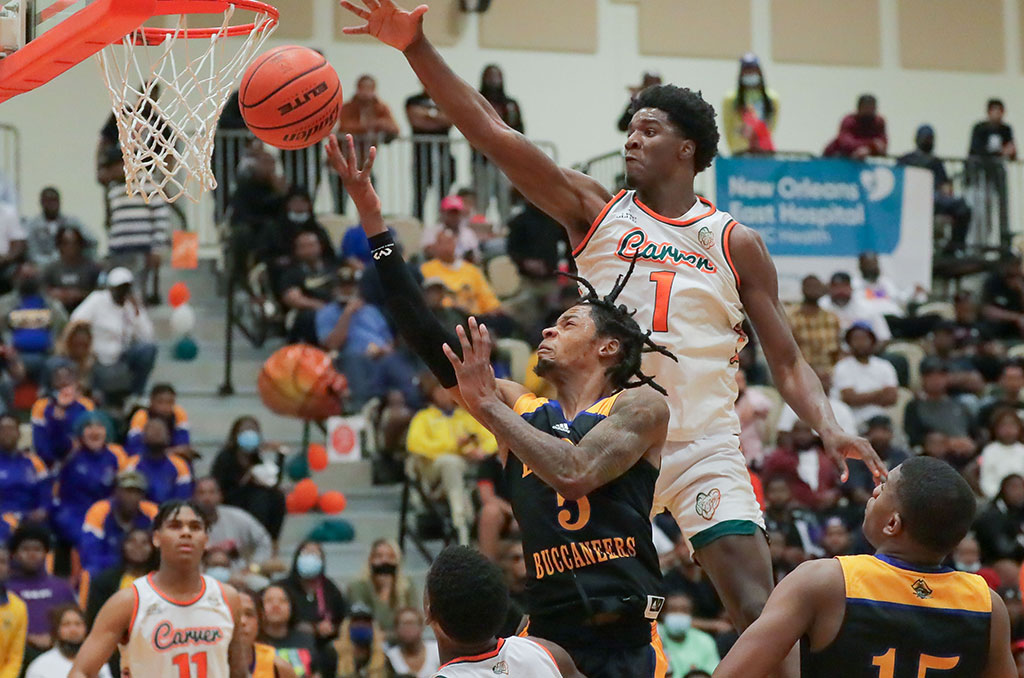 By CHRISTOPHER DABE // Written for the LSWA

Solomon Washington met Carver basketball coach Nate Roche for the first time in the summer before Washington started high school, and Roche told Washington he could someday be the best player in the state.

Nearly four years later, the 6-foot-7 Washington has been selected by the Louisiana Sports Writers Association as its Louisiana Farm Bureau Insurance/Mr. Basketball for the 2021-22 season.

Known for his crowd-pleasing dunks and blocked shots that sometimes got knocked into the bleachers, Washington was a unanimous first-team District 11-4A selection and selected as the district player of the year.

His ability to defend on the perimeter led to several quick baskets in transition.

“To me, that the most important part of the game,” Washington said. “Our defense creates offense.”

Washington learned early in high school that his team could perform better when he let other players score more points. He could average 20 points per game and win games. But when he put a focus on defense and passing, Carver turned close games into blowouts.

The Rams experienced plenty of success with Washington. They reached the LHSAA tournament three times, finishing as semifinalists when he was a sophomore and as a runner-up when he was a junior.

It was that runner-up finish that fueled Carver to a championship this season.

“We were hungry from losing the state championship in the last second,” Washington said. “The amount of work we put in the offseason; I knew we were going to win state.”

Washington and his teammates ran five miles multiple times a week. They worked hard in the weight room.

“I knew our team was ready for the season,” Washington said.

Carver posted a 29-2 record against in-state opponents. The Rams finished the season strong by defeating their final three opponents by wide margins: 29 points in a quarterfinal against L.B. Landry, 49 points in a semifinal against Huntington and 35 points in the title game against McMain.

Washington was not the only Carver player recognized by the LSWA this season. Senior Dorian Finister was a second-team all-state selection and senior Willie Anderson received honorable mention.

But Washington brought a little something extra to his team.

“It’s very rare that you coach a player with his talent, skill level and maturity, and he’s a sponge,” Roche said. “Some guys with his talent think they know it all. I don’t think Solomon has reached that point.”