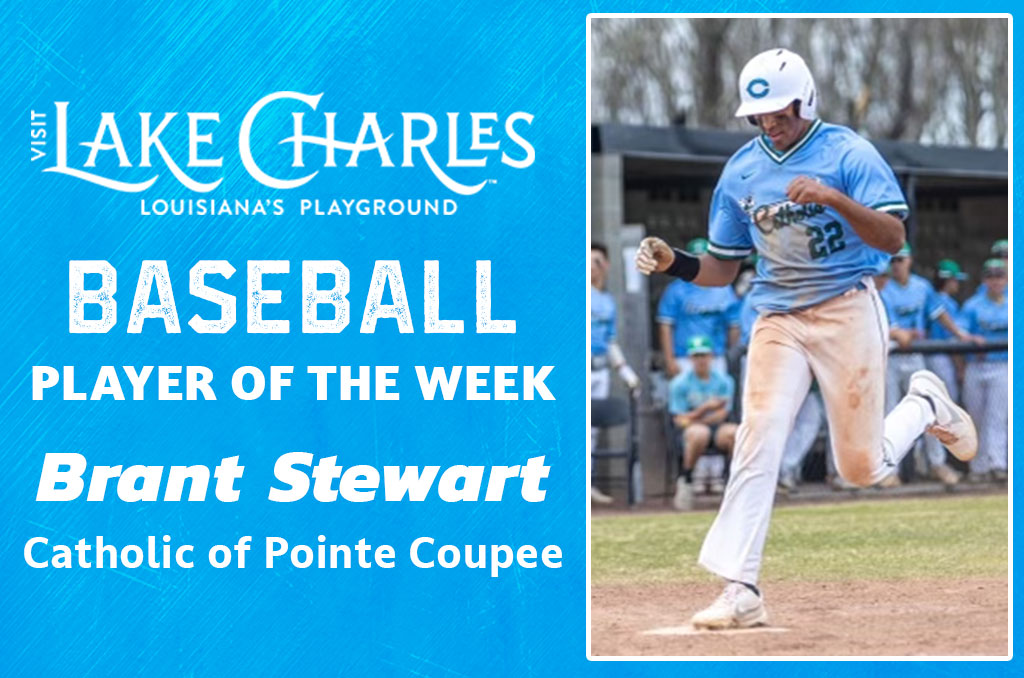 The weekly poll determined by the general public garnered over 72,530 votes. Stewart collected 35,929 votes while Carencro’s Ashton Healy finished second with over 34,215 tallies.

Stewart was 7-of-13 (.538) last week to help the Hornets to a 4-0 mark following convincing victories over local competition. One of the highlights of the week was Stewart’s 400-foot home run at West Feliciana that sailed over the batter’s eye in centerfield that helped add to the 7-2 victory over the Saints. On the mound, he pitched a seven-inning shutout allowing just two hits and two walks while striking out 12 against Port Allen.

Bird’s outing at the plate helped Sulphur pick up multiple victories over north Louisiana teams in tourney play this weekend. The first baseman finished with a .615 average where he drove in eight runs and scored six of his own off of three doubles and a home run.

Cooper’s performance at the plate helped lead the Crimson Tide to a 3-1 record on the week with convincing victories over several out-of-state teams. The catcher was 8-for-12 (.667) with seven extra-base efforts that helped drive in 10 runs for Minden. He finished the week with six doubles and one home run.

Frey had a monster outing last week where he helped the Eagles to a perfect outing that included a victory over Class 5A Sulphur. Against the Tors, Frey tossed five innings and struck out seven to pick up the win. Perhaps, the highlight of his week came in a mid-week contest against Leesville where the highly-touted recruit went 4-for-4 and hit three home runs in the game while adding a triple. In total, Frey drove in nine runs against the Wampus Cats.

Healy had a great outing at the plate last week where he went 9-for-14 (.643) where four of his hits were extra-base efforts that helped drive in seven runs. In a contest against Class 5A Alexandria, the Bears trailed 3-2 in the bottom of the 6th. Healy came up with a huge hit as he cleared the bases on a two-out, three-RBI double to take the lead and solidify the win.

For the week on the mound, Hebert finished with a 2-0 record with eight innings of work and just one run allowed while strikeout 17 batters. At the plate, he was 7-for-9 with eight runs scored. He got on base via three walks and other hit-by-pitches and stole six bases in the process.

Huffman earned the win on the mound in the first of a three-game series against Menard where he tossed five innings and gave up just one run off of three hits and struck out two. In addition, the pitcher batted 4-for-10 at the plate where he collected a double in addition to his pitching effort in the first game and hit a two-run homer to ignite the offense in the final contest of the series.

LaRocca batted .471 with a double and two home runs, six RBIs, six runs and five stolen bases. He also threw out four on steal attempts. On the mound, he picked up the win in relief against Calvary having worked 2.0 innings and gave up only one hit and struck out three. The 2-run home run in the bottom of the 6th inning of the Calvary game gave the Saints the 6-5 lead and would be the game-winning hit.

Loque was essential, both on the mound and at the plate, in helping the Bulldogs to a perfect outing on the week. The pitcher/shortstop batted 6-for-14 with four extra-base hits and six RBIs while scoring eight runs. He provided a walk-off grand slam in the bottom of the ninth inning against Belle Chasse. On the mound, he worked four scoreless innings and gave up just two hits and struck out six batters.

Weimer pitched a complete game shutout win over John Curtis last week giving up only three hits, struck out five batters and surrendered just 1 walk in 69 total pitches. The sophomore worked another complete game to beat South Lafourche, 9-2. He struck out eight and only walked one in 89 pitches.