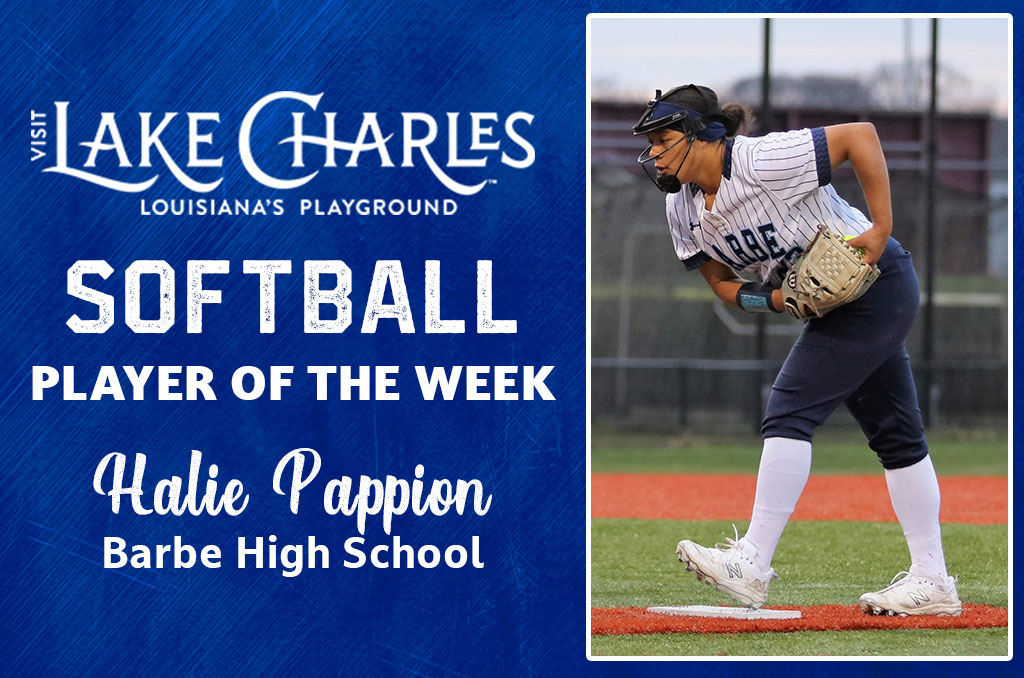 The weekly poll determined by the general public garnered over 132,880 votes. Pappion collected 51,055 votes while Lutcher’s Blair Ursin finished second with over 43,857 tallies.

Pappion faced three defending state championship teams (Notre Dame, Many, North DeSoto) and last year’s state-runner in Class 5A but never hesitated to show why she is one of the best pitchers in the state of Louisiana as she finished with a 4-0 mark inside the circle. In total, the Boston College signee tossed 26 innings allowing just five earned runs and struck out 53 batters. She limited Notre Dame to just one run and struck out 14 batters while shutting out Many in seven innings. She added to her totals against North DeSoto where she allowed only two earned runs and struck out 15 in seven. In a championship rematch, Pappion worked five innings and struck out eight batters along with two runs given up.

Alford served as the key leader in the hitting department for Florien last week as she finished with a .625 (10-for-16) average and finished the stretch with five extra-base hits, four of which were home runs.

Crow provided a great performance for the Lady Devils from inside the circle last week. The Centenary College signee tossed a four-inning shutout against Lake Arthur and worked the final two innings against Menard and allowed no runs and gave up just one hit. In total, she gave up just two hits and struck out 11 batters in six innings of work. At the plate, Crow went 5-for-10 with two RBIs and two runs scored while hitting a triple and a double in the process.

Eaves’ record-breaking outing continued to impress last week as her effort at the plate helped South Beauregard to an undefeated outing while outscoring opponents, 57-19. The first baseman was 8-for-12 (.667) on the week and drove in 17 RBIs and hit five bombs to add to her career total of 49 home runs, a school record.

Holliday batted 11-for-19 (.579) last week and drove in 12 runs on four extra-base hits to help lead her team to victories over Dominican, Zachary, Covington and Northshore. The outfielder also stole a base and got on base by way of a hit-by-pitch.

Malveaux finished with a .667 average with six hits, five of which were extra-base efforts, to help her team to a perfect record on the week. She had four RBIs and scored six runs while having stole five bases. Inside the circle, she tossed 12 total innings with only two runs surrendered and struck out 12 to pick up three wins.

Kaylee Richard enjoyed a great hitting effort last week in helping lead her team with a .750 hitting percentage with six hits. She launched a bomb to add to her hitting and drove in three runs in the process while having scored five runs. In the field, she took advantage of every chance she received and finished with a perfect fielding percentage.

Smith helped her team to an undefeated mark on the week thanks to her performance at the plate where she finished with a .688 batting average. Throughout the five-game stretch, the first baseman smashed two home runs and hit a pair of doubles to add to her 11 total hits and drove in 12 runs during the process. She scored eight runs and finished with a perfect fielding percentage.

Ursin helped the Lady Bulldogs to six wins last week due to her performance at the plate as well as inside the circle. She hit a powerful .667 for the week with 10 hits, a home run and nine RBIs in 19 plate appearances. In the circle, Ursin picked up two wins with 12 innings of pitching for the Lady Bulldogs and an ERA of .583 for the week.