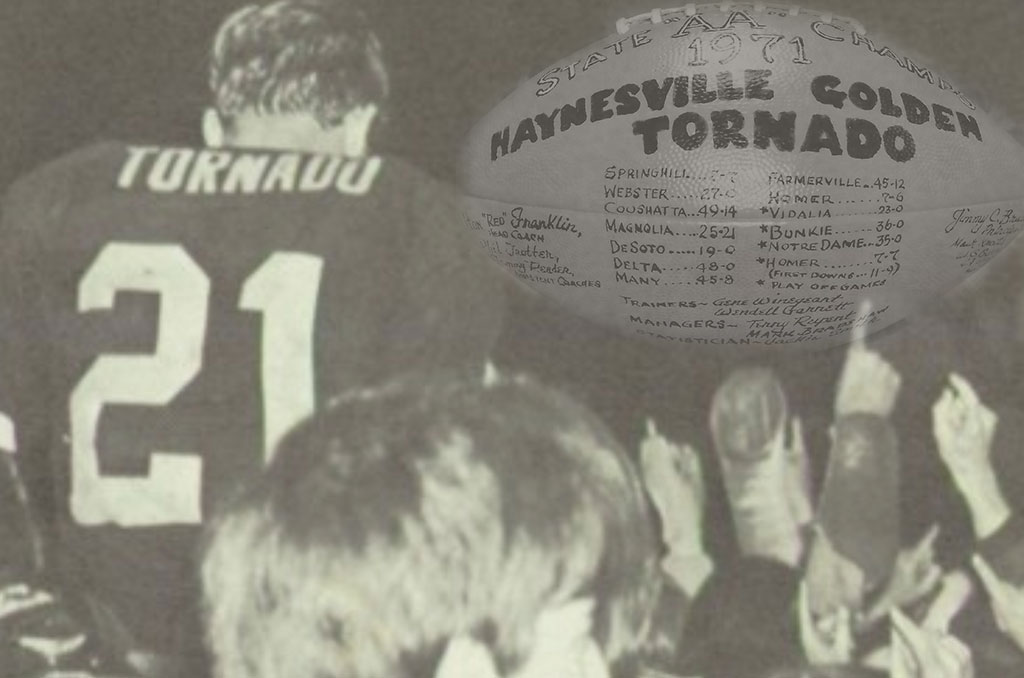 There is nothing about Louisiana Tech’s team doctor, Dr. Eddie Anglin, that tips you off that he is a legend. There are no state championship rings on his fingers. He is usually standing off to the side on the Bulldog sideline, dressed like many of the support personnel.

The only way spectators know his role is when he goes onto the field to assist with an injured player. Many times over the years, Anglin has had to help the injured player off the field.

Like the rest of the Louisiana Tech Bulldogs on Saturday, Anglin was a bit in shock as he watched former Tech head coach Sonny Dykes and his SMU Mustangs snatch victory from the jaws of defeat with a walk-off Hail Mary in the north endzone of Joe Aillet Stadium to beat the Bulldogs 39-37.

50 years ago and 37 miles away, No. 21 for the Haynesville Golden Tornado was on the other side of the win column in the Class 2A State Championship game at Homer High School. Like the SMU players who rushed the field and celebrated the victory, the Haynesville faithful rushed the field that night and in the process hoisted No. 21 up in the air and carried him off the field.

“I remember the whole place was lined with people,” Anglin said. “It was a real battle. They were getting the best of us in the first half, but we had the ball the entire fourth quarter it seemed like. We knew it was going to come down to first downs. When it was over, everybody rushed the field.”

When asked about the “legend” title, Anglin will be quick to point out that there have been many better running backs at Haynesville High School. Bobby Ray Tell is one name mentioned.

Anglin wasn’t the only Haynesville Golden Tornado who earned legend status that night.

Going into the fourth quarter with the score at 7-7, The Homer Pelicans held a 9-3 advantage in first downs. That last part was important because if the game was tied at the end of regulation–which it was–the first down margin would be used as a tiebreaker.

With 1:50 left in the game, and Homer holding a 9–7 advantage in first downs, Anglin’s number was called on a fourth and six option pitch to the right nine yards.

“Inside belly right?” the quarterback suggested.

Initially, it looked like a busted play as fullback Greg Daily was met in the backfield by three Pelicans.

However, Daily was able to keep his feet moving, escaping with a great second effort for a 10-yard gain up the middle. It would be the last first down of the game and give the Golden Tornado an 11-9 advantage to claim their second straight Class 2A title.

After the game, Lori Beard McFerren, the daughter of Homer head coach Ronny Beard, pointed to the trophy on her father’s desk.

“But that one says runner-up,” she protested. “It looks like a first-place trophy.”

The coaches’ kid would grow up to become a captain of the Homer cheer squad, and eight years later add to the lore of the rivalry by starting a fight during the game when the Haynesville cheerleaders brought the Homer squad over to their side to introduce them to the Tornado fan base.

Friday night during homecoming, Haynesville High School will honor the 1971 state championship team on the 50th anniversary. For some, it will be their first time back in Haynesville in quite some time, but that is not the case for Anglin.

He was at “Red” Franklin Memorial Stadium last year when Homer knocked off the Tornado for the first time in 10 years.

“When you go over there,” Anglin said. “You come out of the dressing room. You’re coming out of the tunnel. It’s the same way it was when we were coming out. It’s no different. People are lined up around there and they’re patting you on the back. It’s just a great place to go. It’s small-town America. It’s a great football tradition, and just refreshing.”

It will be even more refreshing this Friday night when other members of the 1970 and 1971 teams are there to be honored for their accomplishments.

“It’s going to be great to see a lot of guys I haven’t seen in a long time,” Anglin said. “I’m sure it’s going to be a reunion of the whole town and multiple classes around us. There will be a lot of stories. Some of them will be true and some of them aren’t.”

As impressive as the 1971 Haynesville Golden Tornado were on the field, the real accomplishment is what the program did off the field in avoiding the tumultuous racial strife in many pockets of North Louisiana due to the integration of public schools in September 1970.

“Our town got together,” “Red” Franklin recalled in 1980 for Jerry Byrd’s Football Country, “They were determined to make this thing work.”

“We never had a fight,” Anglin said. “I never knew anybody that had any problems either way. It was like you’re not supposed to do that, so nobody did. Everybody was on one team. We were coached by this great coach, and everybody in the school was behind us. And everybody in the town was behind us, so we didn’t have any conflicts. There were some guys who left because they didn’t want to play, but there was never a problem with any relationships. It was a seamless transition thanks to Coach Franklin and the leaders in the black community.”

Their neighbors in Homer were not so lucky. Then head coach Ronny Beard said the 1970 Homer Pelicans did not reach their potential due to a lack of focus caused by integration.

“It’s not the Tornados,” Anglin said. “It’s the Tornado. It’s always a team game. Nobody was better than anybody else. One reporter asked him how many yards a running back had. He said ‘I don’t know. We don’t keep statistics like that around here.’It didn’t matter. Nobody knew how many yards you had. It was a great atmosphere, and he was just the greatest coach to play for.”

“They are more than patients of mine,” Anglin said.”They are family. Coach Franklin is like a second father.”

It will be a Haynesville Family Reunion on Friday during the homecoming festivities when the 1970 & 1971 are honored. It will be a very special time. Maybe not as special as the night of December 10, 1971, but special just the same.