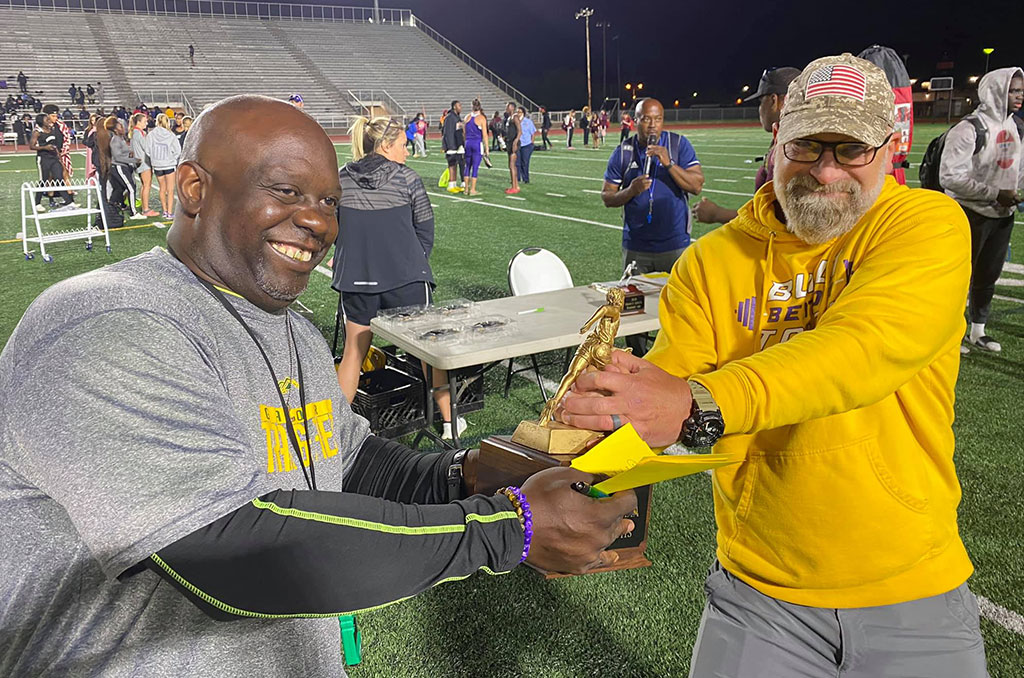 SHREVEPORT — There was a changing of the guard Thursday night at Lee Hedges Stadium at the District 1-5A Track & Field Meet as new faces were in new places when the hardware was passed out at the conclusion of the meet.

Before COVID-19 cut short the 2020 season, the Captain Shreve Lady Gators, under the direction of head coach Marita Hunt, had won five consecutive District 1-5A titles. Parkway, thanks to a strong showing in the field events, won their first girls’ title since 2013.

The Lady Panthers finished first and second in both the javelin and the high jump. Freshman Chloe Larry, who threw the javelin for the first time about a month ago, won the event with a throw of 120-0. Peyton Pipes, who signed with ULM to play soccer earlier this month, finished second with a best of 107’11.

Parkway’s Mikeala Williams and Bianca Oliver scored 18 points in the high jump. Both cleared 5-0, but Williams, a sophomore, won on fewer misses. Williams also won the discus by almost 20 feet with a throw of 121-8.5.

“Our throws today were incredible,” Parkway head coach Kent Falting said.”We went 1-2 in the javelin. 2-3 in the shot put. We went 1 in the discus and a bunch of personal records for the year. We went 1-2 in the high jump, and then–I guess most importantly was watching our senior Joslyn Crosby finish first in the 3200. That really sealed it for us. It was tight until the second to last event.”

In the boys’ division, where the Airline Vikings have claimed the last three district titles, It came down to a few inches in the last race of the night as Benton’s Nick Randle, who had scored 20 points for the Tigers with two second place finishes in the 110 and 300 hurdles and fourth place finish in the high jump, closed on the anchor leg for Parkway. But, Randle, who moved the Tigers from 6th to 5th place on his leg of the relay, wasn’t quite able to move the Tigers to 4th.

Doing so would have moved the Tigers, who scored 114 points in the meet, into first place and given Coach Scott Reeder’s team the District 1-5A title outright. Instead, the Tigers shared the title with Captain Shreve.

Reeder and Shreve head coach Kendrick Law shared a locker room as members of the Southern Arkansas University football team in the 1990s. Thursday night, they shared the District 1-5A title.

Law, despite being proud of his son, was quick to point out that it was a collective team effort.

“Our hurdlers did pretty good,” Reeder said. “Our throwers in the discus and javelin. Both our high jumper and triple jumpers qualified (for regionals).”

In the field events, Natchitoches Central’s Oluwagbe Ojemkinde won both the shot put (52-1) and discus (161-6) to win MVP honors.