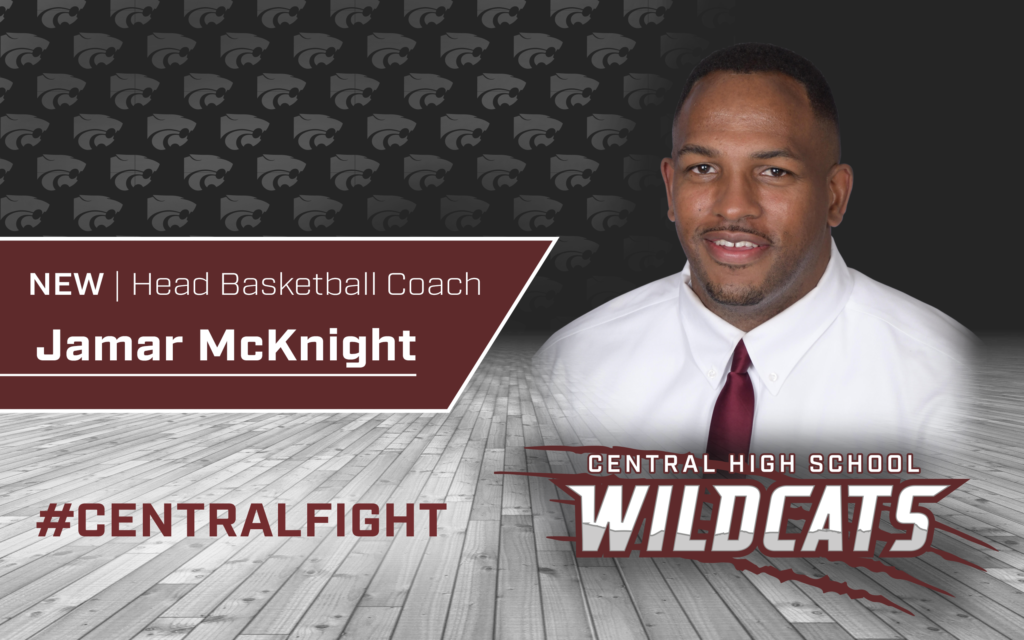 Knight, who has spent the last three years at Southern Lab High School is a former Zachary High School Standout Basketball player who eventually played collegiately at Clemson University (2000-2002) and Northwest Mississippi College (1998-2000). He was inducted into the Zachary High School Hall of Fame in 2014.

In addition to Southern Lab, McKnight has had assistant coaching stops at Zachary and Baton Rouge Community College while also being very active in AAU Basketball in the Capital City.

“Jamar checked all the boxes we were looking for in a coach,” commented Athletic Director Ashley Lewis Rush, “he is well-connected in the Baton Rouge area and is committed to building a top tier basketball program for the Central Community School System from Kindergarten to the 12th Grade.”

McKnight was drafted by the Los Angeles Defenders of the NBA Developmental League in 2007 and played professionally overseas in Austria, Hungary, Portugal, Spain, and Turkey.

“I am extremely excited yet humbled to become the new Head Boys Basketball coach at Central High School,” commented McKnight. “It is a hard-working, thriving, and supportive community with great people that are moving in the right direction with unbelievable pride for their Wildcats. I know that there is a lot of talent in the Central area, as a former athlete from Zachary I grew up competing in football, baseball, and basketball against some of their best youth and high school programs. I look forward to creating relationships throughout the community to build a basketball program alongside our athletic programs to represent the City of Central.”

McKnight and his wife Raven have three children Rhylee (6), Jholee (3), and Charlee (1).

Central High School has announced the hiring  Offensive Coordinator Aaron Vice as he is reunited with his high school football coach Sid Edwards.

Vice, a 2003 graduate of Redemptorist High School, spent last season as the offensive coordinator at Walker High School. Before his move back to Louisiana, he spent 6 years in Houston as the Offensive Coordinator for St. John High School and The Kincaid School.

In addition to his time in Houston, Vice was the head coach at Redemptorist for the 2011-12 season before joining the LSU Football staff as an Offensive Graduate Assistant from 2012-2014. Vice graduated in 2007 from LSU with a B.S. in General Studies and again in 2014 with a Masters in Liberal Arts and Science.

“We are excited to have Coach Vice join our staff,” commented Central Head Football Coach Sid Edwards, “he is high character, experienced, and brings a wealth of knowledge and passion to our football program.”

Vice will be able to join the Central program this Spring which begins later in April to install his offense.

“We are thrilled to welcome back a former Wildcat, who has proven to be an exceptional coach,” said Central High School Principal Brandon LaGroue”.

“I would like to thank Coach Sid, Principal Brandon Lagroue, and Athletic Director Mrs. Rush  for the opportunity to join the staff at Central High School,” commented Vice. “I have admired the work done at Central for years and know it is a special place to work. The Wildcats have always played a physical brand of football and we will continue to do that on offense while also finding ways to produce explosive plays. I cannot wait to get started working alongside my coach and mentor Sid Edwards.”