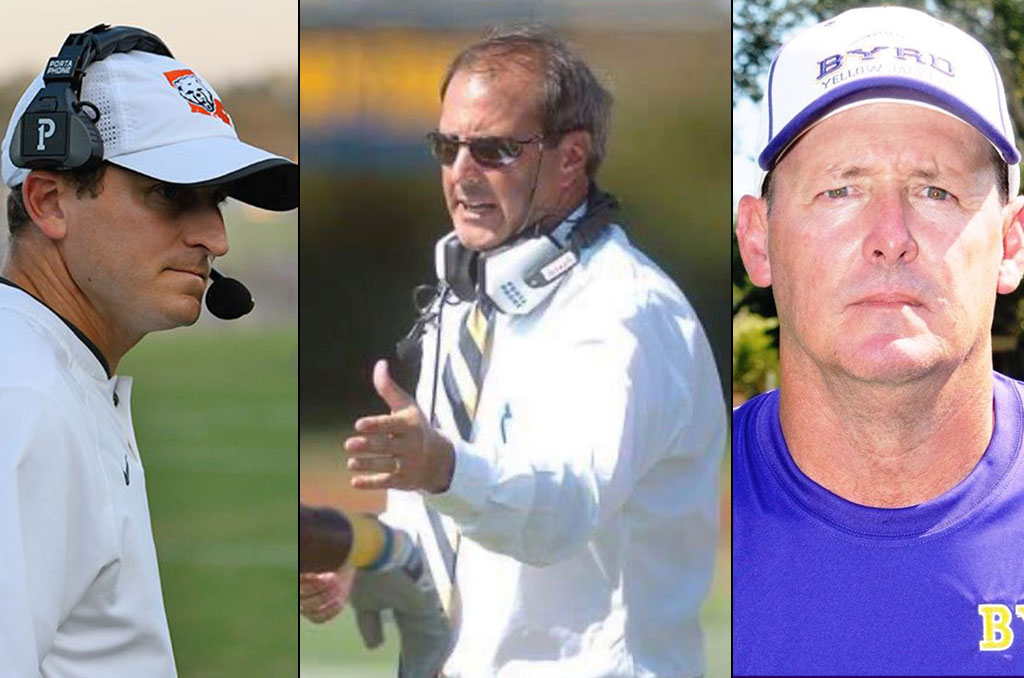 When C.E. Byrd head coach Mike Suggs looks across the field at Turpin Stadium Sunday evening, he will recognize at least one familiar face on the Catholic sideline in the LHSAA Division I State Championship at 6 pm. It will be that of first-year Catholic offensive coordinator Norman Joseph, who coached Suggs at Northeast Louisiana University, now ULM, in the mid-1980s.

After learning his Bears would be facing his former wide receiver, Joseph sent Suggs a text and told him he wanted to get a picture with him before the game.

Due to the nature of the coaching business and relationships built over years these “player-coach coaching matchups” make the games even more special for those involved.

“I’ve recruited players that he has coached and in watching this team, you can see how well-coached they are,” Joseph said. “He has a great imagination when it comes to formations and play calling. He puts his players in a position to win, evidenced by the ten wins they have this season.”

To Joseph, watching the Byrd players is reminiscent of the way Suggs played the game at NLU.

“He was an unbelievable achiever,” Joseph said. “He was a walk-on who worked his way into a scholarship by doing everything right,” Joseph said.

One game of note at NLU was a road win at USL, now ULL, Suggs came off the bench and caught “four or five” third down passes to extend drives to help the Indians to win the game.

“He wasn’t fast, but he did everything to the very best of his ability,” Joseph said. “Those catches he made that night came during key times in the game. He didn’t start that game, but played his way into a starting role because of his performance at USL that night.”

It will not be the first time that Joseph has faced a former player. A former player of his during his tenure as head coach at Mississippi College went on to coach at rival Bellhaven.

The same is true for Suggs, who faced his head coach, legendary NLU coach Pat Collings when Collins was at the helm of the Ouachita football program.

Suggs will not be the only head coach in Sunday night’s title game Joseph has a history with. His head coach, Catholic’s Gabe Fertitta, who leads Catholic into their fourth consecutive Division I championship appearance, got his start in coaching under Joseph at Mississippi College.

Joseph moved from Louisiana College to Mississippi College as head coach. Lost in the shuffle was Fertitta, who had been promised a graduate assistant position by the former staff.

“The AD at Mississippi College told me “Look, you can do what you want to do. You’re the coach, but he was promised a spot,” Joseph said. “My thing was he was a former player and we are going to do what we have to do to help former players.”

Fertitta worked with both the football and track and field teams in GA roles, impressing Joseph at every turn.

“People talk about “student of the game”–It’s so cliche’, but Gabe’s level of detail in studying was unreal,” Joseph said.

What impressed Joseph the most was that a former wide receiver would take to teaching the offensive line the way that Fertitta assisted Mississippi College offensive line coach John Williams.

“Here is a guy who played wide receiver,” Joseph said. “You know many of those guys are primadonnas with the tape on their taped ankles and the shoes. He was willing to get in there and really help us with the offensive line. We had a good offensive line coach who took Gabe under his wing.”

Both Suggs and Fertitta have had unprecedented runs at their schools.

Suggs’ 167 wins at one school are the most by any head coach in the history of high school football in Caddo or Bossier Parish. Fertitta owns a 42-8 (.840) record in his four years at Catholic.

It’s not the success they have on the field which impresses Joseph the most.

“They are both great men who do it the right way and got into the profession for the right reason–to make a difference in the lives of their players. Also, they are both so passionate about the game and giving their players the best chance they can to win.”

As for Joseph, after 43 years of coaching football, he continues to enjoy his long and storied career.

“You hear pastors talking about a calling,” Joseph said. “Well, this is my calling. It’s what I do. I’m passionate about it.”