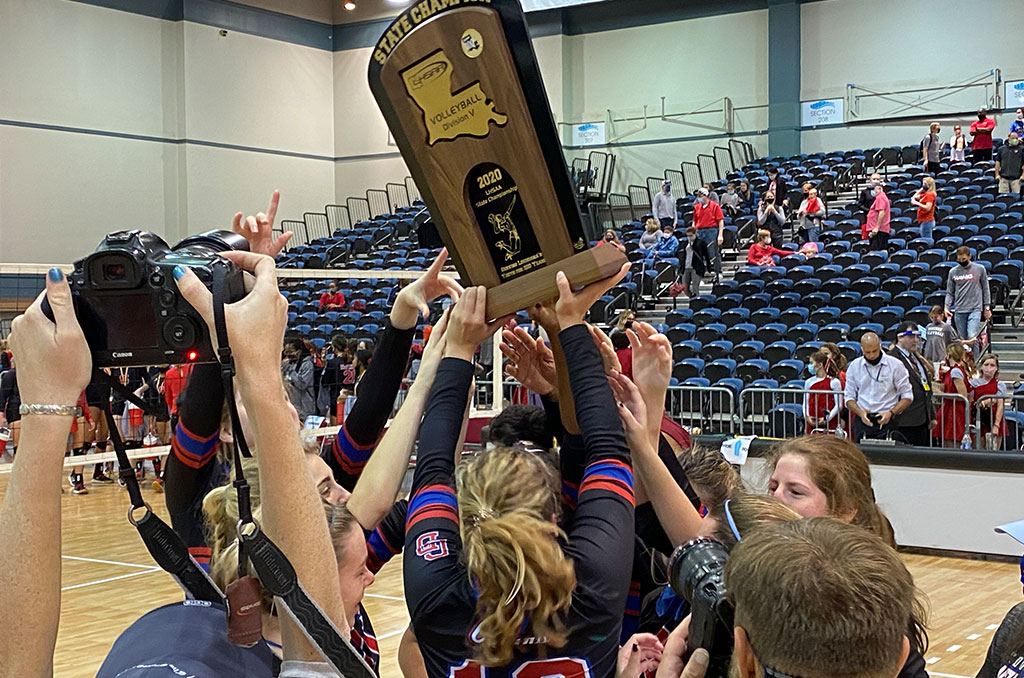 Not even a pandemic could stop Metairie Park Country Day from hoisting a state championship in November.

The Cajuns, featuring a lineup of veterans and newcomers throughout, defeated the McGehee Hawks in three sets (25-11, 25-21, 25-15) to claim the Louisiana High School Athletic Association Division V Volleyball State Championship Saturday morning inside the Pontchartrain Center in Kenner.

Saving its best match of the season for last, Metairie Park Country Day powered through a challenging second set against the Hawks and stormed through the third to win the championship and make the short drive back to Metairie with another trophy.

“They peaked at the right time,” head coach Julie Ibieta said. “We started and we really didn’t know what we had. A lot of people had no experience at the varsity level but who had been in our program for a long time, and we tried a ton of different lineups.”

After having to quarantine in August due to the pandemic, Ibieta knew that their work would be cut out for them to reach this point, but continued to preach that if the Cajuns put in the effort and worked together, they could still reach this point.

Leading that charge was junior Nia Washington, earning player of the tournament honors after finishing the match with 19 kills on a .548 hitting percentage with three aces and six digs. A glut of those finishes came in the third set, looking unstoppable at the net for the early part of the final frame to help push the Cajuns over the line in the end.

“I just went in there, focused and executed,” Washington said. “We got our passes and our service in and just went from there. The momentum carried on throughout the game.”

“Ellie Schneider finished with 12 kills for the Cajuns and hit .500 in the match, as Metairie Park Country Day finished with 41 total kills and hit .367. Ellison Vosbein had 10 digs to go along with a pair of aces, followed by Lauren Perlis with seven.

The nerves of the first championship game of the day were evident early, as the Cajuns and Hawks traded the first few points of the opening set, but Metairie Park Country Day started to find its stride taking an early 5-2 lead. While not being insurmountable, the Hawks called their first timeout of the match after the Cajuns scored four of the next six points to take a 9-4 advantage.

The timeout only served to fuel the opposition even further, as the Cajuns went on a 7-1 run out of the break to go up 16-5 and force McGehee into using its final timeout of the set. Metairie Park Country Day continued to be solid throughout the opener, going up 20-9 before the Hawks got into double digits, eventually going on to win the set 25-11.

After the Cajuns ran away with the opener, McGehee was able to adjust and proved more formidable through the early goings of the second set. Through the first eight points of the frame, the two sides were tied at 4-4, but a three-point swing by Metairie Park Country Day put the Cajuns up 7-4.

That quick trio of points was enough for the Cajuns to feel a bit more comfortable in the set, using that momentum to go on a run that put the side up 16-10 at one junction and even further into the set leading McGehee 24-14 after a kill from senior Lily Horridge, after shaking off an injury she suffered early in the set to put the Cajuns on the brink of taking the set.

After using their second timeout to halt the rally, the Hawks fought back valiantly and suddenly a sure thing was not looking so sure for Metairie Park Country Day. McGehee earned the first two points out of the break and then the next, coming on a team rally that kept the ball in play and back over to the Cajuns’ side that fell inside the line made it a 24-18 score. Metairie Park Country Day called its first timeout of the entire match leading 24-19, but out of that break an ace by Ellie Western made it 24-20 and another point which followed forced the Cajuns into using their second leading by just three points at 24-21.

Any lingering doubts were quickly put to bed by the Cajuns to start the third and final set of the match, going on a 7-0 run out of the gate, powered in part due to Washington, to set the tone early. Within the blink of an eye the Cajuns were on top 12-2 and looking nothing short of wanting to put the match away with every swing.

The Hawks burned both of their timeouts during this stretch, and was able to pull to within five of Metairie Park Country Day at various points, but with the score sitting at 17-12, the Cajuns closed out the match going on an 8-3 run, with the final point coming on a McGehee service error to claim the title, the school’s 11th in the last 12 seasons.