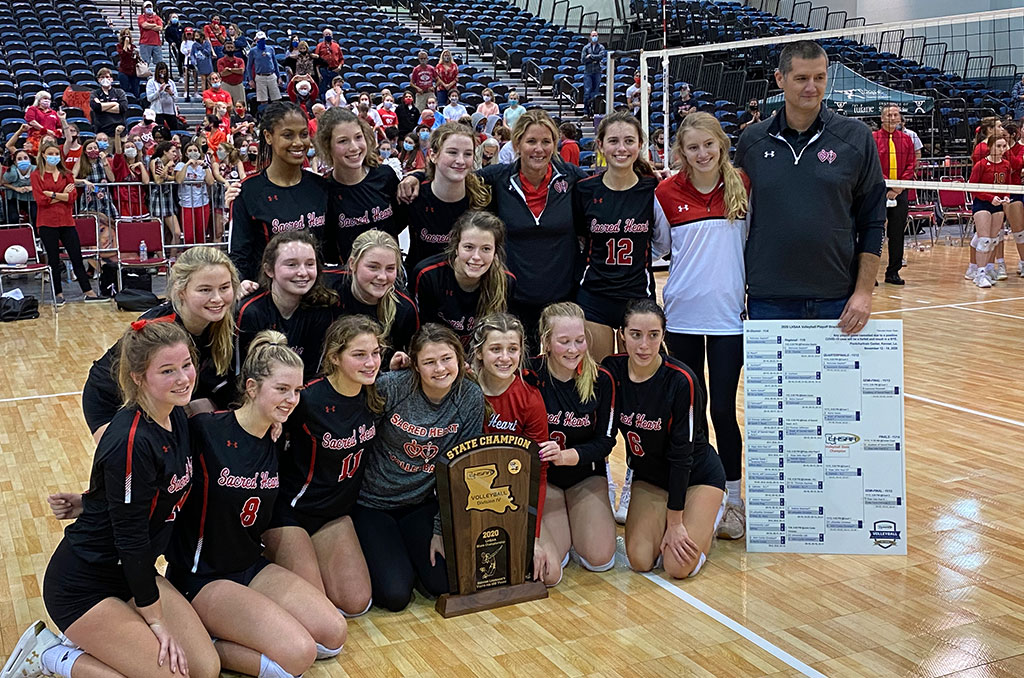 For Sinisa Momic and the Academy of the Sacred Heart Cardinals, it’s going to be hard to top 2020.

For a program that had not won a state championship since 2006, and with an entirely new coaching staff, the team captured the Louisiana State High School Athletic Association Division IV Volleyball State Championship Saturday at the Pontchartrain Center with a gritty 3-1 (25-21, 18-25, 25-22, 25-21) victory over the Pope John Paul II Jaguars.

With the match tied at a set apiece, Sacred Heart (19-4) would need to dig deep to fend off multiple rallies by the Jaguars (21-3) in the following two sets, with the final one going down to the wire.

“It was tough and we expected that. The key thing is the players really started to believe that they are as good as they are and things started clicking right before the tournament,” Momic said. “Once the first two matches went 3-0 for us I knew we had a chance. But the way they executed and fought it was unbelievable.”

The Cardinals were led by Lindsey Mcgaw’s 20 kills, followed by most valuable player for the tournament May Manning’s 14.

“We always knew we could do it, we just had to believe in it,” Manning said. “When they say this is the best feeling in the world, they are not lying.”

For the Jaguars, they fought until the last play and just missed out on pushing Sacred Heart to one more set. Pope John Paul II was led by Rachel Hartmann who finished with a match-high 33 kills, three blocks and 19 digs, with Kayla Benedic following with 10.

Kendall Battistella earned a double-double for the Jaguars with 36 assists and 15 digs, as Savana Dyer chipped in a pair of assists.

For the fans of both sides, the start of the Division IV final featured a thrilling nine ties and six lead changes in the first 20 points of the opening set. Neither side seemed to be able to shake the other in a meaningful way to gain some separation to start the match. With a 10-9 advantage in favor of Sacred Heart, the Cardinals fired a shot that landed just outside of the line to tie the score once again at 10-10. What that point began was a 6-0 swing for the Jaguars that forced the Cardinals into their first timeout of the match.

While it may not have been as evident following the short break, the Cardinals slowly began to chip away at the Pope John Paul II lead methodically, first by outscoring them 3-1 to turn an 18-13 deficit to 19-16 to push the Jaguars into a timeout. Pope John Paul II earned the point out of the break, but it would be the last one for a while as Sacred Heart connected for the next seven to lead 23-20 and force the Jaguars into their final timeout.

The timeout was effective, with Pope John Paul II earning the point to make it a 23-21 game. However, the Cardinals just needed to get the ball back and Sacred Heart would be just a point away from taking the set. The Cardinals did just that, and earned the next pair of points to win the first set 25-21.

After holding the lead for much of that opening set, Pope John Paul II took to the second and began by taking the first four points in a row to put the Cardinals in a 4-0 hole early. While not nearly as close as the first, Sacred Heart was able to rally by taking the next three to pull within a point at 4-3. With the score at 6-5 in favor of the Jaguars, a 5-1 run by Pope John Paul II pushed the score to 11-6 and Sacred Heart into a timeout.

Some unforced errors by Sacred Heart throughout the set only made things harder for the side, as the Jaguars seemed to be a bit sharper in key moments in the set, which included outscoring Sacred Heart 5-2 at one junction, pushing its lead at that point to 20-14 to push the Cardinals into using their last timeout of the set. Pope John Paul II netted five of the final nine points to take the set 25-18 and even the match at 1-1.

Consecutive points for the Cardinals opened the third set, as Sacred Heart captured six of the first eight to lead 6-2 with Pope John Paul II calling a quick timeout to try and stop the rally. It took some work, but the Jaguars netted 12 of the next 20 points, capped by a Benedic cross-court kill to tie the set for the first time at 14-14. Unfortunately, all that work came undone as a three-point swing for Sacred Heart pushed the Cardinals back on top 17-14 and Pope John Paul II into their final timeout.

The Cardinals continued to go on a tear, taking seven of the next nine points to get to set point leading Pope John Paul II 24-16. Needing just one more point, the Jaguars strung together one last run to make things interesting by rattling off the next six points straight to force Sacred Heart into using its first timeout of the third. The timeout worked, and a kill down the line for the Cardinals ended the third with a 25-22 score with Sacred Heart leading the match 2-1.

Like the opening set, the fourth proved to be a much more tense affair and for much longer. Through the first 28 points of the set there would be 11 ties and five lead changes, with the largest lead for either side being three points. Pope John Paul started the stronger of the two sides, taking the opening two points of the set and somehow continued to find ways to hold off Sacred Heart any time the Cardinals went on the offensive, which included a 4-1 run to break an 8-all tie to lead 12-9.

Sacred Heart stayed composed, scoring four of the next five to tie the set at 13-all, taking its first lead of the fourth by taking two more after that to go up 15-13. Three of the next four for the Jaguars tied the game at 16-16 and began the frantic run to the finish for Sacred Heart to take the title or Pope John Paul II to send the match to a decisive fifth.

With the set tied at 19, the Cardinals got back-to-back points to lead 21-19 and force the Jaguars into a timeout. Pope John Paul II earned two of the next three to trail 22-21, but that quick jump for Sacred Heart proved to be enough as the Cardinals extended the lead to 24-21 to force another Jaguar timeout, only delaying the celebration by a bit as Sacred Heart closed out the match on the very next play to win the set 25-21 and the match 3-1.