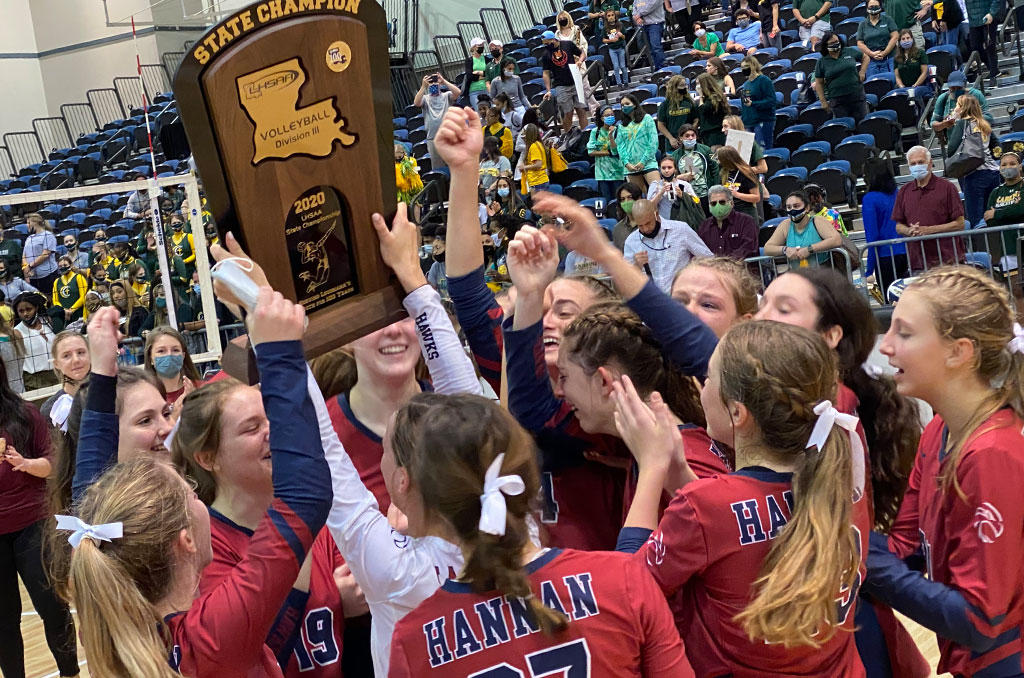 It’s one thing to be staring down an 0-4 start to the season. It’s another to have a state championship on the line.

For the Archbishop Hannan Hawks the stakes were much higher than they were at the start of the season, but just as they were able to do in that very first meeting early in the season, the team was able to earn a straight-sets sweep of the Cabrini Crescents Saturday afternoon 25-9, 25-17, 25-12 to claim the Louisiana High School Athletic Association Division III Volleyball State Championship inside the Pontchartrain Center in Kenner.

For a bulk of a roster featuring mostly underclassmen, the Hawks (19-11) seemed to be a team poised for the moment and left no doubts about claiming its first title since 2018.

“When we went 0-4 to start I was worried, but getting that first win against Cabrini it just clicked for them,” head coach Rebekka Bonnaffee said. “We had a little bit of a rollercoaster this season, but I think in the back of their minds they knew what they were capable of.”

Rylee Morris led Hannan with 17 kills on the afternoon, followed by most valuable player of the tournament Carleigh Breaux had 14. Sarah Kirsch had 39 assists to lead all players on the afternoon, with McKinley Bowers having 11 digs and a pair of aces.

For the Crescents (14-10), it was also a season filled with trying to bleed new youth into a program that is also used to winning championships. Cabrini wasn’t able to match with Hannan on Saturday, but have a lot to build on after a challenging year in its own right.

For senior Alexis Thompson, this season has gone even further than that, helping prove that this team could overcome any challenges to even make it this far.

“Before this season, people asked us if we even though we could make it to the Pontchartrain Center,” she said. “Saying that we didn’t even need to work that hard, but I think we showed them that we could do this and we did do this.”

Hannan couldn’t have asked for a better start to the match, taking the first six points out of the gate and nine of the first seven. Once Cabrini was able to settle down, the Crescents would be able to put points on the board, but before they knew it they were calling a timeout trailing the Hawks 13-5.

Cabrini split a quartet of points with Hannan to continue to push through, staring down 15-7 deficit midway through the opening frame, but the Hawks found another gear altogether and there was little the Crescents could do to stop the Hannan offensive attack. The Hawks closed out the first set outscoring Cabrini 10-2 over the course of the final 12 points to take the first set convincingly, 25-9.

Hannan stormed out once again to a sizeable lead by rattling off seven of the first eight points against the Crescents to open the second stanza. But this time, Cabrini was ready and started to find its groove both at the service line and in forcing Hannan into some unforced errors to steal a bit of the momentum back. The Crescents captured five of the next six points, as Hannan called its first timeout of the match with a slim, 8-6 lead over Cabrini.

From that point on, the match had a much different tone with Cabrini standing firm and finding pockets of space in the Hannan defense. Eventually, the Crescents finally caught up to the Hawks and knotted the set at 9-9 for just the second time on the afternoon.

The realization for Hannan that they were now in a true test of their mettle, the Hawks began to find the separation they needed in the set, outscoring Cabrini 8-3 to go back on top 17-12. The work wasn’t done, though, with the Crescents doing enough to keep the set within reach, pushing the Hawks late and staying within a handful of points down 19-16.

Slowly, Hannan began to move closer to the end and forced the Crescents into a timeout trailing the Hawks 21-16. Cabrini was able to force one more point out of the set at 22-17, but Hannan roared toward the second set victory by netting the final three points in succession to go on top 2-0 in the match with a 25-17 win.

While they may not have taken the set, Cabrini took to the third with the intention of making things much more difficult for Hannan as they did in the second. And while the Hawks were able to take the first three points to start the final set, the Crescents did not go away quietly, routinely finding ways to keep Hannan from going on long runs to put too much distance between the two sides.

Unfortunately for Cabrini, they could never seem to get any closer than a handful of points within the Hawks for much of the third. The Crescents called their first timeout trailing Hannan 10-5, and eventually found themselves trailing the Hawks 16-7. Those stalls on offense for Cabrini proved to be too costly to overcome in the end as they called their final timeout down 20-10, eventually succumbing to Hannan 25-12.