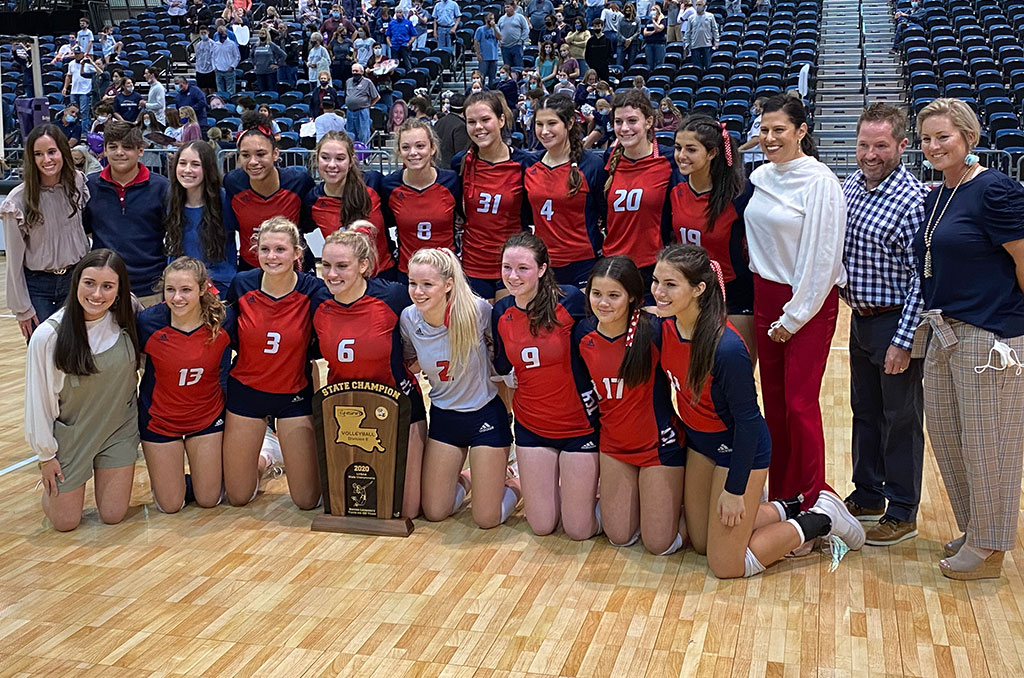 With roughly nine miles separating the two schools, in the Louisiana High School Athletic Association Division II Volleyball State Championship game between St. Thomas More and Teurlings Catholic, the two hour drive back home to Lafayette was always going to be jubilation for one side and agony for the other.

After dropping the first set, the Rebels proved to be the stronger of the two sides on this day pulling out the next three to earn a 3-1 (20-25, 25-19, 25-19, 25-20) victory over the Cougars and claim the program’s eighth-straight state championship.

In a match that was closer than the score line may indicate, Teurlings (24-2) was able to find its mix of offense and defense to push ahead of the Cougars (14-5) in key situations to stay ahead and pull out the victory in the end.

“It’s always an emotional game and all bets are off when we play each other,” head coach Terry Hebert said. “I felt that if we controlled our errors, didn’t cough up points on errors and control our emotions hopefully we’d win.”

Teurlings was led by senior Cicily Hidalgo who finished the match with 16 kills, 32 digs and four blocks in being named the most outstanding player of the tournament. Paige Guidry led all players with 22 kills, chipping in a service ace.

Samantha Fontenot had 33 assists, while Emma Cother had 24, as Molly Webre had 44 digs to lead the match.

“It was hard but it was still fun because at the end of the day we came out with the win and still knew we could push ourselves as a team,” Hidalgo said. “We’ve never pushed ourselves that hard, and knowing we could do that it just makes you feel better and know your team is a great team.”

St. Thomas More may not have come away with the top prize, but in pushing city rival Teurlings to its limit is enough for them in the end.

“I thought we played loose. I thought that we had fun. I thought we enjoyed our last game together,” head coach Jessica Burke said. “I couldn’t have asked for anything more.”

AC Froehlich led the Cougars with 14 kills, adding a pair of aces. Addison Phares had six kills for St. Thomas More. Bailey Toups served up 33 assists, while Maya Richard had 28 digs. Ella Guilbeau had four blocks, while Toups and Froehlich had two aces each.

Resembling a heavyweight bout, both sides opened the match trading big blows early. St. Thomas More began by earning the first three points, but was followed by Teurlings earning the next five after that. With the next two going in favor of the Cougars again, the two sides essentially ran into a quick standoff leading to three more ties over the course of the next eight points.

Trailing 9-7, STM got to work not only closing the deficit but beginning to pick up its stride offensively in a big way. A six-point swing propelled the Cougars to a 12-9 advantage and playing on the front foot against the Rebels. St. Thomas More was beginning to pull away and got to the 20-point threshold forcing Teurlings into a timeout.

The Rebels regrouped, proving that they weren’t going to go away quietly and was able to pull within four points at a few key exchanges, but STM held firm and went on to pull out the first set 25-20.

Like the first set, the second proved to be a match of inches, and through the first 22 points it was deadlocked at 11-11. Eventually, something had to give, and once again it was the Cougars who found the extra gear to forge ahead and scored four more after that to go on top 15-11 and force the Rebels into a timeout.

Teurlings was able keep the margins small for the Cougars, bouncing back to take five of the next seven points to pull the game within a single point, keeping it that way until battling back to turn an 18-16 deficit into a 21-19 advantage over the course of the next six points and force the Cougars into a timeout.

For as much as they tried, St. Thomas More couldn’t put together the run to eventually break down the now stout Teurlings defense that seemed to be everywhere the Cougars were trying to put the ball. By the time it was over, Teurlings closed out the set on a blistering 8-0 run to knot the set at 1-1 with a 25-19 victory.

Teurlings used that fire to take the first point of the third set, but they would have to wait a while before getting another as STM earned the next five after that. The Rebels, fighting back as they did before were able to cut the Cougar lead to just a single point at 5-4, but some unforced errors that led to St. Thomas More points eventually saw the other side go up 9-4 in quick order.

But as in volleyball, things can change quickly and they did for STM as the Cougars were only able to muster three more points while Teurlings ate away at the lead and took their own by pulling 10 points during that stretch and took a 14-12 advantage. The table flipped again soon after and St. Thomas More went on a 3-0 run to regain the lead at 15-14, setting off another string of knotted scores.

However, the one-point lead for the Cougars at 16-15 would be the last for the squad as Teurlings bullied its way to four straight points to take a 19-16 lead over STM. That lead grew to 21-17 as St. Thomas More burned both of its timeouts during that run to try and stop the rally. Unfortunately, the damage was already done and the Rebels held serve enough to hold STM to just two more points after that and took the lead in the match 2-1 with a 25-19 third-set win.

What started as a set that looked like either side was capable of running away with it at some point, it turned out to be the opposite midway through as neither side seemed eager to let the other gain much ground. The Rebels were the ones out of the gate looking to close the proceedings going up 5-3 early, but the Cougars didn’t say quit, rallying to tie the set at 5-5 before taking a 9-6 lead.

The match became razor thin very quickly, as Teurlings weathered to tie the set at 9-9, leading to three more tie scores after that. After the Cougars tied the set at 12-12, the Rebels reeled off a pair of points and then three of the next four after that to lead 17-13. STM was undeterred, getting five of the next seven to force Teurlings into a timeout down 19-18.

St. Thomas More took blow after blow and didn’t wilt, but in the end the Rebels were able to string together the points to keep enough of a lead to keep the Cougars at bay, holding STM to three more points for the rest of the set to take the fourth 25-21 and the match 3-1.