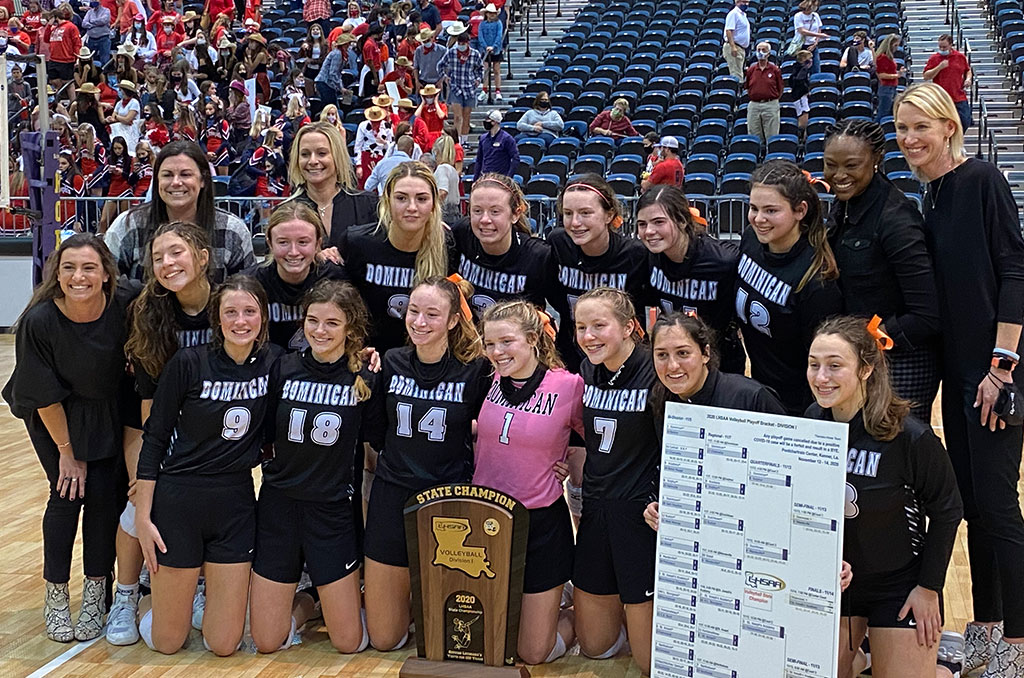 For St. Joseph’s Academy, it was reaching the championship match for the first time in a more than a few years and a chance at reclaiming a bit of the legacy that comes with being a Redsticker.

But for Dominican, it was the chance at winning a first trophy period.

The two sides squared off for the Louisiana High School Athletic Association Division I Volleyball State Championship in Kenner, and by the end of the night the trophy would have a short drive it its new home as Dominican earned the title by defeating SJA 3-1 (25-13, 25-17, 23-25, 25-22) Saturday.

After an impressive start to the match, Dominican (30-2) was made to work for the school’s first state championship by St. Joseph’s (23-4), needing to contend with numerous comeback attempts by their opponents to eventually lift the trophy and put a cap on a long weekend and even longer season.

“It was a very different year this year,” head coach Jessica Chatellier said. “But I feel like even with all of the challenges with the pandemic, I feel like these girls came in every single day and just gave everything.”

Dominican was paced offensively by O’Neil Haddad and Elizabeth Hardouin as each finished the night with 10 kills. Haddad also added six blocks while Hardouin led the way with a pair of aces.

Most outstanding player honors went to junior Kate Baker, who finished the match with 23 assists and 14 digs for the double-double, as Brooke Couret led all players with 21 digs.

“I think we came in from the beginning with confidence the entire time and that’s what really pulled us through today, this weekend and the whole season,” Baker said. “We didn’t care who was on the other side of the net, we knew if we played our game that was enough to beat anyone we could ever face.”

While the Redstickers finished in second place this time, the squad will be able to take solace in the fact that few would have expected them to make it as far as they did this year, much less being in contention to earn a championship in a year such as this.

“The girls were worried all the way up until the last day of school saying ‘don’t get quarantined, don’t get quarantined’ because we didn’t want to lose anybody on the team or have the team get quarantined and just to protect ourselves,” head coach Sivi Miller said. “2020 has been crazy, but we’re bringing home a second place trophy. There’s a lot to be proud of and it hurts not to win when you know you could. Dominican played very well, but so did St. Joseph’s and I’m proud of them.”

Grace Toler led all players with 11 kills, followed by Morgan Perry’s 10. Camille Counce had 20 assists and 11 digs for a double-double, while Erin Beene had eight blocks and Olivia Judice had two aces.

With the way the match started, you could have forgiven Dominican for being at ease after giving up the opening point of the match to St. Joseph’s. Trailing for the first time, it would be the last time in the frame that the Redstickers would field the lead as Dominican rolled off the next four to take a 4-1 lead over the Baton Rouge-based school.

However, it’s still SJA, and the team battled back to tie the set at 5-5 and 6-6, in short order, but after getting to that point Dominican took charge and netted the next six-straight to take a commanding 12-6 lead, eventually forcing St. Joseph’s to call its first timeout trailing 15-8. The sledding would only get tougher for the Redstickers as by the time they called their second they were staring down a 20-10 deficit.

The lead, as well as Dominican’s all-around play in the opening frame was just too much for St. Joseph’s to overcome, as the Redstickers earned just three more points after that as Dominican cruised to the opening set victory 25-13.

After storming through the first set, Dominican looked as if they were about to do the exact same thing in the second as it raced out to a 4-0 lead to start and eventually pushed that lead to 8-2. But this time, SJA was ready to counter, and did so by pulling in seven of the next nine points to force Dominican into a timeout, and out of that break tying the game at 10-all.

The Redstickers were back in the match, and while St. Joseph’s would not be able to find a way to take the lead, they were able to keep Dominican within no greater than two points for much of the middle of the set. For Dominican, all it was looking for was a moment to strike and they found it late as they were able to capitalize on some St. Joseph’s mistakes to gain enough distance and take a commanding 2-0 lead in the match with a 25-17 win.

The Redstickers had the first serve of the third set and went on the offensive early, taking the first two points, three of the first five and four of the first seven. It gave St. Joseph’s the chance to not only have a leg up early, but force Dominican to play a bit more openly than it had to in the previous two sets. And for much of the first half of the set it proved it worked, as while Dominican took the lead within a span of five points it would not last long and SJA found itself right back in the thick of it.

With the set tied at 10-10, the Redstickers produced a trio of points to take a 13-10 lead and pushed Dominican into a timeout. It took work for either team to get to the 15-point mark, and SJA was the one to power through leading Dominican 15-12 at that stage, but Dominican soon picked up the pace and outscored the Redstickers 6-1 to take the lead at 18-16 heading into a St. Joseph’s timeout.

Dominican seemed poised to finish off the night with a sweep after taking the lead so late, but the Redstickers had other plans and in a fever SJA stormed its way back into the match by tying the set at 20-20, trading leads with their rivals before taking the lead at 21-20 as Dominican called its second timeout. The Redstickers would not trail again as they were able to hold off Dominican and kept the match alive by winning the third set 25-23.

“I think that in the first two sets we were kind of just nervous. None of us have been in this position before, so it was something new and it took us a while for us to adjust to it,” senior Simone Moreau said, who led the Redstickers with 17 digs.

“In the third and fourth set we found what we were looking for, we found our groove and started playing our game,”

After coming so close in the previous set, Dominican exploded out of the gate to start the fourth and did so by going on a 6-1 run. Dominican held serve for long enough stretches that St. Joseph’s could never seem to make a dent into that early lead, eventually calling a timeout trailing Dominican 11-4. The match shifted for SJA, outscoring the opposition 6-4 as Dominican called a timeout leading by just five points at 15-10.

In what felt like a shifting tide in favor of the Redstickers, Dominican watched its large lead shrink to just a mere two points at 15-13 before snapping back to life in a big way by using a 6-1 run of its own to lead SJA 21-14. Once again Dominican was on pace to close out the match, going up by seven at 23-16, but St. Joseph’s refused to go quietly, pulling to within three at 23-20.

SJA was able to stave off championship point twice to keep the match alive and keep their hopes of pushing it to a fifth set. Unfortunately, the Redstickers were unable to find the rest of the magic to overcome Dominican in the end, as they closed the match with a 25-22 victory to claim the championship 3-1.

“I think the amazing part of this group is, I think last year was a confidence issue when we came into this match and what was amazing to see was the second we hit the playoffs there was never a doubt in our mind that they were going to make this run,” Chatellier said. “They came in and controlled every single match and came in with confidence. It was just an amazing thing to see as a coach.”