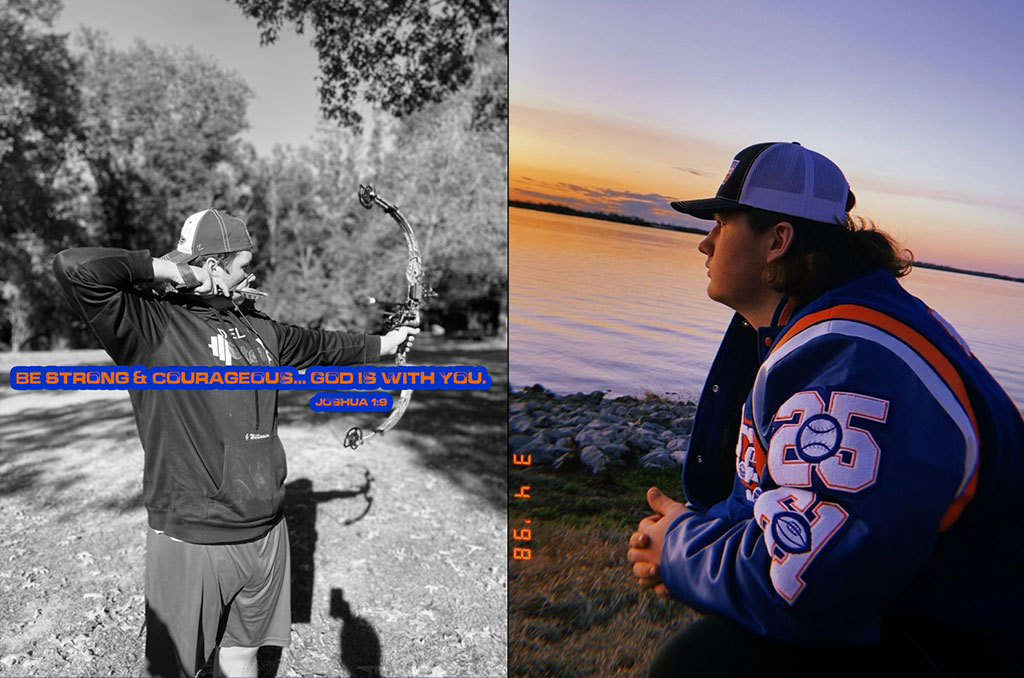 Editors Note: To support Garrett and follow his journey back to good health, please follow and like “Garrett’s Journey” on Facebook. The family updates his condition constantly and also provides ways to help support him financially as they travel to and from St. Jude Children’s Hospital in Memphis, TN.

As the Delhi Charter football team takes the field Thursday night for its season-opening game, one of its most notable players won’t be there.

Garrett Williamson has been an unstoppable force within the trenches for Delhi Charter over the last three seasons. There has never been an obstacle he’s faced that he did not eventually conquer.

However, this fall, while his team tackles its first game of the regular season, Williamson has traded in his shoulder pads for a warrior shield in hopes of taking down his toughest opponent yet.

In the early part of this year, Williamson was preparing for another passion of his as the Gators powerlifting team was getting set for their season. Just weeks leading up to his first meet, Williamson began to notice some changes in his health that progressively grew more concerning.

“Right before the lifting season started, a buddy of mine went with me to the parish fair to ride some of the carnival rides where I began having chest pains afterward,” said Williamson. “Then I started to have those pains again later on during one of our girl’s powerlifting meets. That evening, after the meet, I drove myself back home and the pain was so bad that I thought I was having a heart attack. I took myself to the emergency room where they performed some tests on me.”

When they first told me what it was, my first thought was that we had to immediately get started and do what we have to do to beat this,” said Williamson. “There wasn’t anything that I could do about it but keep pushing forward.”

By that night, Williamson and his mother Kelly were en route to St. Jude Children’s Hospital to begin the fight with multiple rounds of chemotherapy treatments.

This journey was something Williamson never dreamed of having to endure. With the necessity of a chemo port to help with treatments, chances of stepping out on the football field decreased each day.

“With it being his senior year and preparing to be an anchor in the trenches and we find out he had been diagnosed with cancer was a big setback from Garrett as well as our team,” said Delhi Charter head coach Jeremy Foote.

Foote and his team hoped that Williamson would somehow be able to strap on his helmet once again so that he may take part in one of the most important seasons of his career, his senior season.

“When he found out that he wasn’t going to be able to play football he was heartbroken, said Williamson’s mother Kelly. “He has been with coach (Jeremy) Foote all throughout junior high and high school so he wanted to finish out his prep career with him.”

That did not stop the Gator lineman from trying his best to be part of a team that he grew up with who now was supporting him in his fight.

“Since his diagnosis, Garrett has tried his best to get on that field, even so far as asking to kick,” said Foote. “As much as I would have loved to let him do that, I don’t think the doctors would sign off.”

Although he could not participate physically, Williamson was constantly supporting his teammates and coaches by encouraging and supporting them in their preparation for the 2022 season.

“Our team has been in constant contact with him and encouraging him,” said Foote. “These kids have grown up together. Every one of these seniors is a Delhi native and has been a close group. In junior high, when I first took over, they all played the same positions and a tight-knit group that hasn’t changed a lot.

Overnight, worry and fear transformed into courage and leadership.

“Ever since he was a small child, Garrett has had an amazing faith in God,” said Kelly. “He believes that without a shadow of a doubt if he asked God then that is what it’s going to be. I think that is what has helped get him through so much including the first six months of chemotherapy.”

“Garrett’s a real positive kid and has always been a hard worker,” said Foote. “I think if there is anyone that can kick this thing in the teeth, it would be him. One thing this has done is allowed him to really think about the future and what he wants to do with his life so he’s busy planning for the future rather than sitting back which accurately describes his attitude.”

One of Williamson’s key characteristics that display his strength and confidence resides on the top of his head. The Gator lineman has proudly maintained a full head of hair currently shaped into the style of a mullet despite multiple rounds of chemotherapy. It remains a sign of strength for him as he continues his journey to recovery.

“The one thing that has stuck with me shortly after finding out about his diagnosis was that he told me that this thing wasn’t taking his mullet,” said Foote.

Even with a long battle ahead of him, Williamson continues to encourage his teammates and coaches and will be tuned in as the Gators prepare to take on Rayville in a non-district showdown.

His message to the team does not just serve as a motto for a game of football but for a mindset in his own battle.

“Just keep pushing and don’t ever quit on any play.”