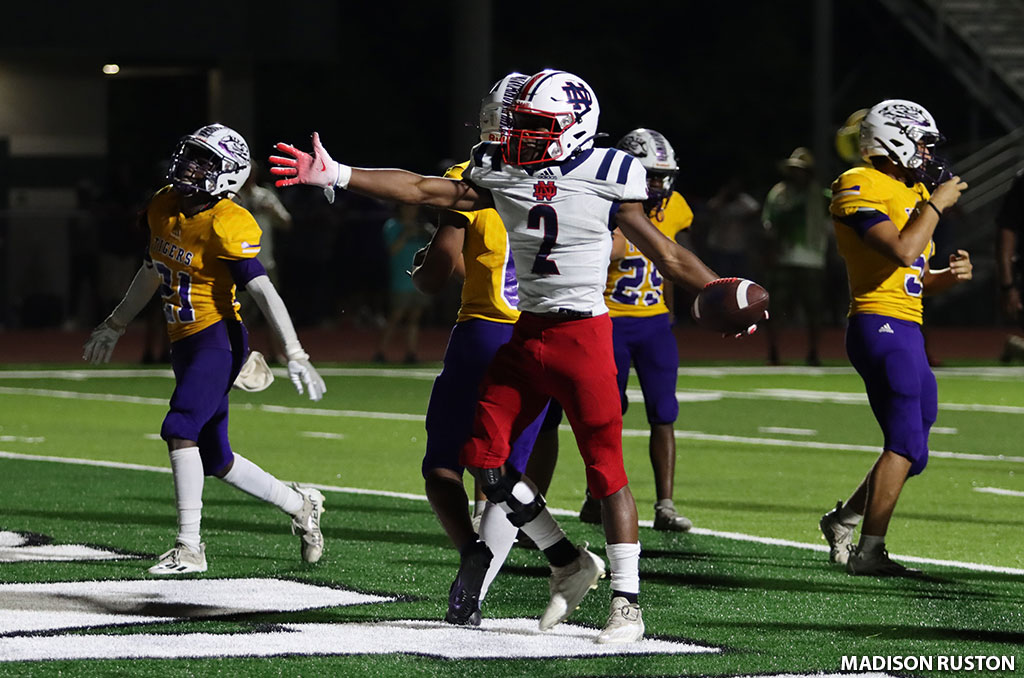 A breakout 2020 season with over 1,000 yards on the ground all but set the tone for a promising junior year for North DeSoto tailback John Lewis.

However, that opportunity came to a screeching halt in the spring of last year. After an impressive showing in spring drills, Lewis put on the pads and was ready to show out in the team’s scrimmage. However, one hard hit changed everything.

Following a routine tackle, Lewis was helped to the sideline and didn’t return to the game. It was recommended to go in for an x-ray to get a better understanding of the exact injury. Being a dual sport athlete, Lewis was attending the end-of-the-year track banquet when football head coach Dennis Dunn came and gave him the news.

“John, I have your results, you have a torn ACL,” explained Dunn.

Within a breath of air, his whole season was taken away.

“When coach told me the news, I immediately broke down crying right at there at the table,” said Lewis. “I was so sad and heartbroken that I was going to miss my entire junior season.”.

With an ACL tear, the recovery period usually takes a span of nine months. Lewis wanted to get the process going as soon as possible.

“Starting out it was but hard, but I was determined to fully recover and get back on the field,” said Lewis. “Thanks to my physical therapists for keeping me motivated during the whole process.”

With Lewis’ sideline for the entire 2021 football season, the Griffins felt the loss of their up-and-coming rusher. With Sam Odom already having to be moved from his original position of wide receiver to quarterback, there were a lot of adjustments being made on the offensive side of the ball, including a good amount of running responsibilities for Brian Banks.

North DeSoto struggled early in the season, starting with an 0-4 record. The Griffins were able to turn it around late in the season and advance into the playoffs but fell short of an ultimate comeback when they lost to rival Northwood of Shreveport in a second-round rematch of district competition.

“I hated watching from the sidelines and not being able to help,” said Lewis. “ I always supported my teammates, but it was hard knowing there was nothing I could do.”

After waiting his turn, Lewis was finally cleared to make his return and stepped onto the practice field just nine months after his injury.

One person who was more than excited to have one of his hard-working rushers back was position coach, Matt Parker.

“John’s leadership on and off the field was the biggest thing we missed,” Parker said. “He is obviously extremely talented and started every game for us as a sophomore. But John is extremely composed and always positive no matter what the situation is at practice or in a game. He was still around all the time and did a great job of mentoring our running backs that had to step up in his absence.”

One positive that came out of his absence was the development of another running back. Coach Parker is ecstatic to have not one but two senior running backs in the backfield this season.

“The beauty of him being back this year is we developed another super talented running back last year in (Brian) Banks so now we have a talented, experienced 1-2 punch,” said Parker. “We call them thunder and lightning. They both have different running styles, but both have an opportunity to be 1000-yard rushers. The thing that is most special about both of them is they are each other’s biggest fans. There is zero jealousy of one another and they are both model teammates. They have the mindset of taking over the game as a running back duo rather than worrying about what their individual stats are.”

The season for the Griffins begins September 1st at home against Airline, which is ironic for Lewis due to the fact that he will be going up against the same team in which he suffered his injury a year ago.

When asked if he had any extra motivation for this game he said, “Yes there’s extra motivation because I started out great in the spring game gaining yards and then my season was cut short due to the injury, so starting my senior year against them motivates me to give it my all and leave everything I got out on the field.”

This a big opening game for North DeSoto, hosting a Class 5A school in the first week of the season. But the game means so much more to Lewis.

Lewis is hopeful that all the right pieces are in place for the Griffins to have a big season.

“I think that I will be able to benefit the team with my running skill set and making my runs effectively and that will help benefit the passing game.”

With quarterback Luke Delafield taking over the Griffins, a strong run game will help to take some of the pressure off of the freshman signal caller. Missing an entire season, Lewis is looking to make up for lost time with high expectations for himself.

“My expectation for myself is to stay humble and hungry and to improve on my sophomore season with more yards and touchdowns,” said Lewis. “I want to become an all-state running back. My expectation for the team is for us to stay healthy, have an undefeated season, deep run in playoffs, and finish at state.”

It’s been a long road to recovery for Lewis, but with a lot of determination and hard work, he’s back and ready to work. John is always grateful for everyone who helped him along the way and had a key role in his recovery.

“I would like to give a special thanks to Christus Highland Dr. Houtz, Rob, and all the nursing and physical therapy staff,” said Lewis. “I am back doing what I love because of them.”

The long wait is almost over. The junior tailback will finally get a chance to make up for lost time and do what he’s been missing Thursday night.

And Lewis only has one thing on his mind.

“Talking with pads is all I plan to do this year.”