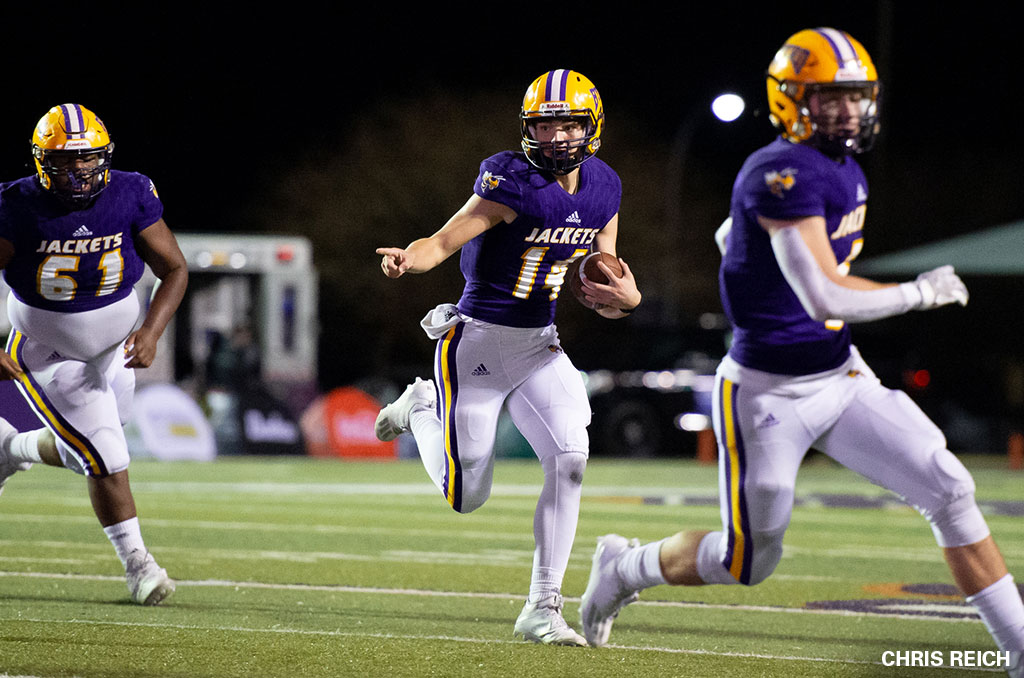 After a disappointing 2019 campaign, the C.E. Byrd Yellow Jackets made the shortened 2020 season one to remember at 3201 Line Ave. Mike Suggs, who unbeknownst to the Jacket Faithful was coaching his last season at the school, led his team to the Division I LHSAA State Championship where they fell to Catholic in a hard fought 35-12 title game at Turpin Stadium in Natchitoches.

The Jackets were not without motivation.

First, a preseason twitter prognosticator put the Yellow Jackets in the five hole. That prediction made the rounds, including the C.E. Byrd locker room. Later in the season, the Jackets played inspired after the loss of Cherie Humphrey, the mother of Byrd wide receiver Kellum Humphrey.

It wasn’t that Byrd beat all of the teams in the District 1-5A. It was how they did it, only allowing one team–Airline–to score more than one touchdown.

Byrd did all of this with a sophomore quarterback at the helm, who had zero varsity experience. Starter Logan Pons injured his ankle in a scrimmage against Ruston. Lake Lambert (6-2, 185), who saw action in only freshmen games in 2019, stepped in and proved up to the task.

But that was then, and this is now.

After 23 years as head coach, Suggs announced his retirement in March. Long time defensive coordinator, Stacey Ballew, takes over. Graduation took some key pieces of the puzzle, especially on the defensive side where the Jackets will need to replace Carson Bruno along the front, Junior Brown at linebacker, and safeties Luke Miletello and Brayden Hermes. Bruno signed with Louisiana Tech, and Brown signed with Northwestern State.

On the offensive side, Lambert returns but will call the signals behind a brand new offensive line. All five of the Byrd starters on a solid offensive line were seniors.

Running back Mitchell Ramsey is the only other returning starter on offense.

On the defensive side, the Yellow Jackets return three starters. Cornerback Tyler Poland and safety John Jordan will patrol the secondary for the Jackets. Ryan Todd will lead the linebacking group.

“The Jackets will have to replace 17 starters off of last year’s Division I State Runners-up team,” head coach Stacey Ballew said. “Byrd does return quarterback Lake Lambert and the versatile Mitchell Ramsey on offense, while linebacker Ryan Todd and defensive backs Tyler Poland and John Jordan return on defense.”

The Haughton Buccaneers will have to replace the school’s all-time leading tackler as linebacker Jake St. Andre graduated in May.

St. Andre, and the Haughton defense were a big reason the Bucs only lost one regular season game–a week two 28-10 loss to Byrd.

Head coach Jason Brotherton, in his sixth season, complimented his defense multiple times during the season, especially defensive coordinator Gary Smith, who Brotherton has often said is the best he has ever been around.

The solid defensive play helped Brotherton and offensive coordinator Kyle Wilkerson work with younger, inexperienced players on the offensive side of the ball–including sophomore quarterback Colin Rains (5-11, 190), who was much improved in leading Haughton to a first round 31-3 playoff win over Live Oak.

Rains, did not have the luxury of a spring practice due to covid, had to step up when Haughton senior Peyton Stovall, who was by most accounts the top returning quarterback in Northwest Louisiana, announced during the summer that he was going to concentrate on baseball.

Rains will be protected up front by Peyton Polk (6-4, 300), who leads the offensive line.

Brotherton is also excited about the return of running back Dexter Smith (5-10, 180).

Rains, Polk, and Smith are three of the seven Bucs returning on the offensive side of the football.

“The 2021 Buccaneers will be much more explosive on offense,” Brotherton said.

“Defensively, we will be replacing several three-year starters including Jake St Andre, who became the all time leading tackler in school history,” Brotherton said.

If Captain Shreve Gator head coach Bryant Sepulvado doesn’t have much of a poker face going into the 2021 high school football, don’t blame him. It’s hard not to smile when you have arguably the best athlete in the state on your sideline.

That is the scenario Sepulvado finds himself in this season as Kendrick Law Jr. returns for his senior season. The 5-11, 185 pound Law is ranked by 24/7 Sports as the No. 10 athlete in the nation, and– overall– No. 6 prospect in the state of Louisiana. He holds offers from several SEC schools, including LSU.

Law is one of the main reasons District 1-5A coaches selected the Gators to win the district championship in the GeauxPreps.com Preseason Coaches Poll. Sepulvado’s Gators received four first place votes.

But Law isn’t the only reason Captain Shreve is thought highly of. Law is just one of eight returning starters on offensive. Other skill players to watch include; running backs Brandon Johnson (5-9,180) and Matt Hall (5-9, 170) and wide receiver Braylon Finney (6-1j, 175).

The Airline Vikings with a 3-4 record in 2020, but their head coach, Bo Meeks, who is entering his 11th season, is a fighter and an optimist. He believes in his Vikings.

“We will be replacing a lot of experience and production from last year but I am excited about this team and their potential, “ Meeks said. “With most of our returning starters on defense, it will be important for them to play well early and allow the offense to gain experience. I really like this group and I’m looking forward to seeing them grow as a team.”

The Viking defense, led by former Southwood head coach Brian Taylor, who took over the Airline defensive coordinator position a year ago, will depend on linebackers Jaden Miller (6-3,200), Justin Epps (5-10, 205)and Jae’Lon Shumake (6-1, 210). In the secondary, Coach Taylor, a former defensive back at ULM, will rely on cornerback Ja’Robert Kelly (6-2,175) and defensive back Chris Montgomery (5-11,180) for leadership. Willie Sanders (5-11, 230) will lead the defensive line from his end position.

It seems odd that the newest team to District 1-5A, the Benton Tigers, have the dean of district head coaches in Reynolds Moore, but with the departure of Byrd’s Mike Suggs, Moore, who is entering his 13th season at the helm in Benton, has the most experience.

One thing that Moore is excited about is the number of returning starters on both sides of the football. The Tigers return seven on offense and six on defense. Only Captain Shreve and Southwood return more experience.

Offensively, quarterback Gray Walters will be the signal caller. Walters’ weapons include wide receiver Pearce Russell (5-10, 165) and running back Greg Manning (5-7, 155). Moore is hoping Cameron McComack (6-2,250) and his fellow offensive linemen will be able to protect Walters and open up holes for Manning.

Defensively, Davis Sellers (6-3, 215), who also plays tight end and is one of the most versatile players in the district, will lead the defensive front from his end position. Free safety Sawyer Simmons (6-0, 175) will lead the secondary.

Benton, who finished 2-5 last year, enters their third year in District 1-5A and continues to work their way to the top. Moore believes the Tigers are not far from reaching their goal.

“We just need to develop a little more depth to compete deeper in Class 5A,” Moore said.  “Both sides of our line should be much better than recent years. I like our quarterback and receivers to be more consistent this year. We should be solid in the kicking game as well.”

Another team looking to get back to the top of District 1-5A is the Parkway Panthers. A 3-5 season left a bad taste in the mouth of first year head coach Coy Brotherton. Now, entering year two of the Brotherton Era, the Panthers, who return more starters (9) on offense than any other team in the district, have South Bossier excited about the possibilities in 2021.

“We return nine offensive starters including all six offensive linemen,” Brotherton said. “This will be great for our running backs to be able to work with a big physical line. Cannon Link returns as our starting quarterback and will have the task of commanding the offense while our defense will have the opportunity to learn and grow.”

Offensive lineman Devon Hall (6-3,290) leads one of the groups Brotherton is most excited about. The Panther offensive line will look to open holes for running back Jaylan White (5-10, 175).

White finished fifth in the Region 1-5A Track & Field Meet in Natchitoches this past spring. The only football players to finish ahead of White were Shreve’s Kendrick Law and Natchitoches Central’s Braylin Demars. White has a best of 10.63 in the 100 meters.

Both the Natchitoches Central Chiefs and the Southwood Cowboys struggled to find their way in 2020 as both programs brought in new leadership. Natchitoches Central’s James Wilkerson and Southwood’s Dean Smith will both be looking to break into the win column this season as both endured a winless first season.

“This team took the offseason very seriously and is committed to turning this program around,” Wilkerson said. “The team is stronger and faster than last year and is building a cohesive team with one goal. Great core group of returning starters that will lead the team and help bring some new starters along.”

“Our team looks to improve on their second season under the new coaching staff, “ Smith said. “Veteran players on both sides of the ball gives this team a chance to compete with others in our district.”