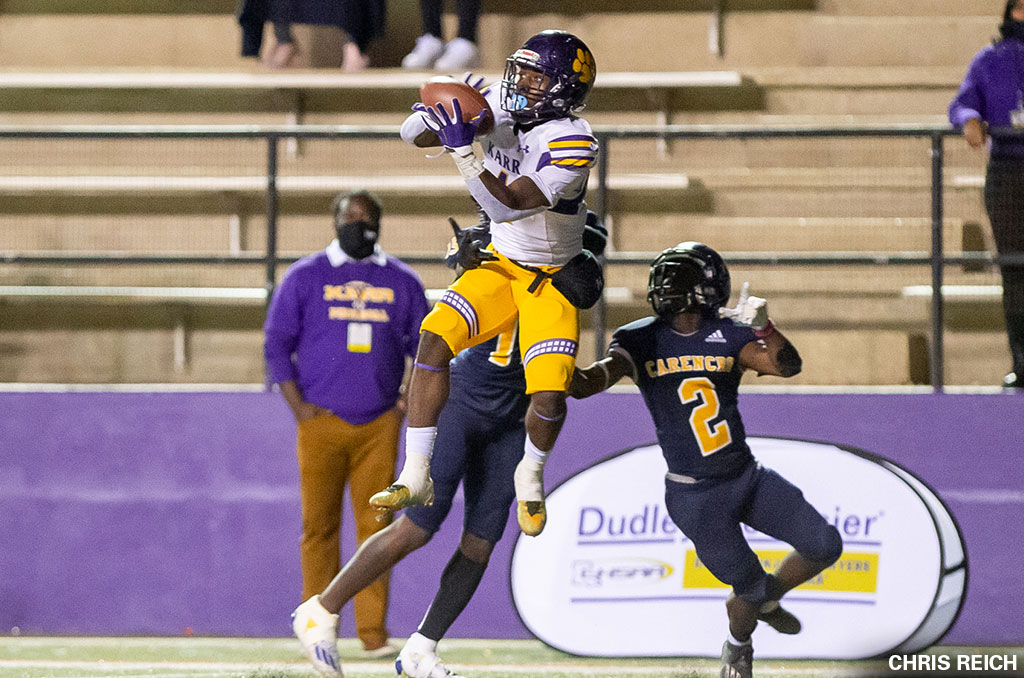 GeauxPreps.com takes a look at a few of the state’s wide receivers who will be sure to keep fans cheering, opponents on their toes, and collegiate recruiters foaming at the mouth.

Anderson committed to play for the Tigers of LSU back in December but he is no doubt a player to keep any eye on this fall. The four-star commit looks to lead Edna Karr back to its seventh consecutive title game. In 2020, he grabbed 36 passes for 678 yards and eight touchdowns. Anderson is a playmaker that can get out in the open and leave defenders in a dazed and confused state.

Harvey Broussard gained the attention of recruiters nationwide early in his prep career. His awareness on the field and talented, effortless grabs help him stand out amongst the 2023 class of receivers. The dual-sport athlete has received offers from Arkansas, Mississippi State, Penn State and UCF. He has worked to improve his craft this summer at multiple camps and 7-vs-7 tournaments. Look for Broussard to have a great season for St. Martinville and help lead them back to playoff competition.

The best name in high school sports is without a doubt going to be one of the most exciting receivers to go watch in 2021. DeColdest Crawford is a quarterback’s dream that knows where to locate the ball and can use his speed to motor past defenders. The senior touched the ball 50 times in 2020 for 813 yards and six touchdowns. Ed Orgeron staved off several hungry Division I recruiters to get Crawford, who committed to the Tigers as a freshman. DeColdest will go down as one of the best in Green Oaks history, along with Tre’Davious White, and could be a household name in the NFL someday.

Makai Donaldson is one of the wide receivers that may be flying under the radar but will make plenty of noise this fall. The 6-4, 200 junior has already received offers from Florida State and Virginia and has other big-time programs looking his way. With his quarterback being Arch Manning, there is no doubt the two will make a good pair and have each other’s stats glowing by the end of the season.

Landon Ibieta recently committed to the University of Miami in Florida and for good reason. The Hurricanes see great things in the three-star wide receiver who, according to some analysts, is a better prospect than his rankings indicate. With the Hurricanes expected to lose a few receivers after the 2021 season, Ibieta will no doubt have the skills and knowledge to step up and make the next big play. In 2020, he caught 33 passes for 714 yards and 14 touchdowns.

A.J. Johnson is another target that Arch Manning will have in his arsenal this season. The LSU commit looks to become faster and stronger as he approaches his senior year and looks to use his strength and speed to help him on the outside. The four-star commit helped lead his Newman squad to the 2020 Division IV semifinals while leading all receivers with 41 receptions for 587 yards and six touchdowns.

Omarion Miller had a breakout year in 2020 where he averaged 27.8 yards per catch and helped his North Caddo team to a second-round appearance in the postseason. In fact, he was so impressive that it earned him several offers from SEC programs such as LSU, Ole Miss and Mississippi State. His impressive work last season where he recorded 807 receiving yards and eight touchdowns helped him land a spot on the Class 2A All-State team. He will be a fun student-athlete to watch as he works to perfect his craft.

The top-ranked receiver in this year’s class is ready to show out and showcase his skills while also entertaining offers from the likes of LSU, Alabama, Texas, USC and Georgia. Preston caught 50 passes for 865 yards in 11 games last season along with nine touchdowns. He led his squad to the Class 3A state title game two years ago. He is warming up to the Tigers but look for a last minute push from all the major universities across the Southern region.

Shelton Sampson has all the tools to succeed at the next level but will have two more seasons to get better. Will he really need those two seasons is the true question. Shelton has landed offers from multiple universities including LSU, who looks to be a front-runner to land the four-star athlete. Sampson could join an elite cast of receivers for the Tigers in the near future and with what we have seen on the field so far, whichever coaching staff lands this stud will be very happy to have recruited him.

Tamaj Vergin has one offer so far but is determined to attract collegiate coaches this season as he begins his junior campaign as one of the top receivers to watch in 2023. He recorded 15 catches for 150 yards in his first varsity season last year after falling victim to an ACL injury as a freshman. Vergin has been offered by Mississippi State and will continue to work hard and get stronger, faster and gain more knowledge. That will help him land a scholarship at a major college football program.