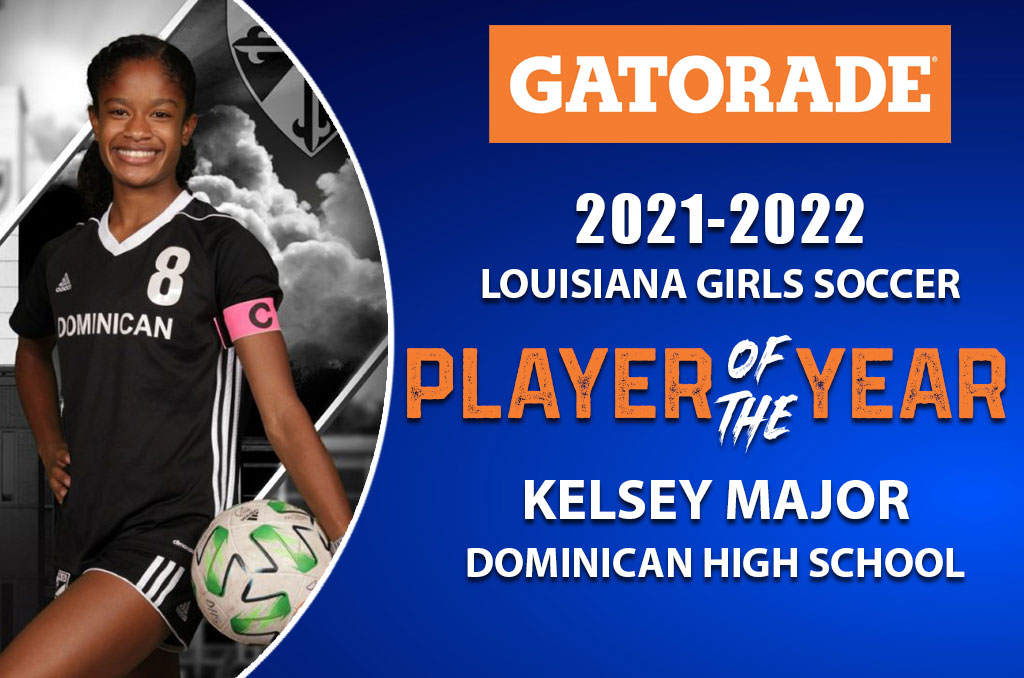 The award, which recognizes not only outstanding athletic excellence, but also high standards of academic achievement and exemplary character demonstrated on and off the field, distinguishes Major as Louisiana’s best high school girls soccer player. Major is now a finalist for the prestigious Gatorade National Girls Soccer Player of the Year award to be announced in June.

The 5-foot-5 senior forward scored 38 goals and passed for 19 assists this past season, leading St. Mary’s Dominican (29-1-1) to the Division 1 state championship. The state’s returning Gatorade Girls Soccer Player of the Year, Major was a First Team All-State honoree and the Division 1 Offensive Player of the Year. Also a United Soccer Coaches All-American, she concluded her prep career with 79 goals and 53 assists.

Major is a member of her school’s Student Leadership Council and has volunteered locally as a mentor for young soccer players. “Kelsey Major was the most dynamic player in our state again this year,” said Kyle Carmouche, head coach at St. Joseph Catholic High School. “I saw her score in every way imaginable this year; she was a threat every time she had the ball. She is that rare combination of a special talent who is also a team-first type of player.”

Major has maintained a weighted 4.67 GPA in the classroom. She has signed a National Letter of Intent to play soccer on scholarship at Louisiana State University this fall.

Gatorade has a long-standing history of serving athlete communities and understands how sports instill valuable lifelong skills on and off the field. Through Gatorade’s “Play it Forward” platform, Major has the opportunity to award a $1,000 grant to a local or national organization of their choosing that helps young athletes realize the benefits of playing sports. Major is also eligible to submit a short video explaining why the organization they chose is deserving of one of twelve $10,000 spotlight grants, which will be announced throughout the year. To date, Gatorade Player of the Year winners’ grants have totaled more than $3.5 million across more than 1,300 organizations.