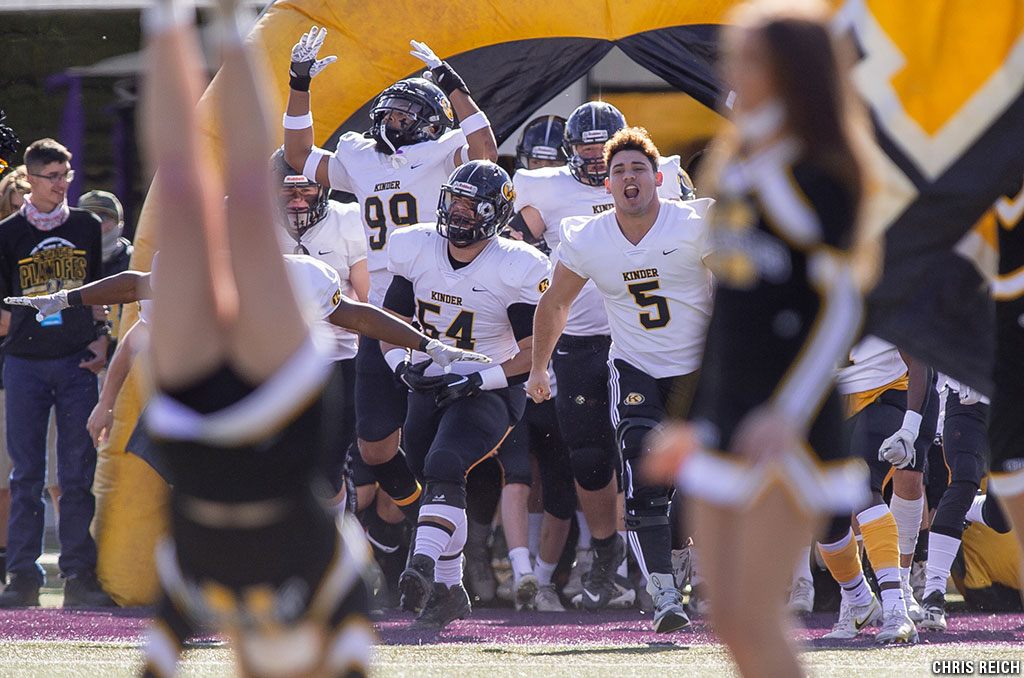 The road to the District 5-2A district championship runs right through the heart of Kinder, Louisiana.

The Yellow Jackets are no strangers to winning, having advanced to the state finals in four of the last eight seasons, including a showdown with Many in last year’s Class 2A title game.

But the past is the past. Head coach Bret Fuselier must now look to some new faces to help keep the ball rolling down in Allen Parish.

“Success will depend on how fast the newcomers will make the adjustment and perform on the varsity field,” said Fuselier. “Our young kids will have some athletic ability but we may see some growing pains early in the schedule.

Kinder is tasked with replacing seven starters on offense, although quarterback Graham Fawcett returns to anchor the Yellow Jacket attack. Last season, Fawcett started as a sophomore and threw for over 550 yards and seven touchdowns. His experience could help instill confidence and provide an east transition from last year’s high-octane performance.

On defense, Kinder has just three starters returning from a unit that held opponents to 10 points or less six times last season.

Fuselier admits that his Jacket squad has its work cut out in regards to the district slate in 2021.

“Our district should be quite a bit tougher this year with many teams returning a lot of players,” Fuselier.

Although youth will play a factor, do not look past the Yellow Jackets come playoff time. A tough preseason schedule followed by a competitive district slate will have them ready to compete come time for the postseason.

The team that has the best chance to give Kinder a run for its money this fall is the Rosepine Eagles, who were predicted to finish second in District 5-2A.

Rosepine is coming off of a 5-3 campaign that included a playoff appearance. However, that only fueled the fire.

The Eagles have never made it past the second round in the history of its program. They look to change that this year with nine starters returning on offense and seven on defense.

“The 2021 Eagles will be experienced with seniors and juniors so expectations are high,” said head coach Brad Ducote.

Senior quarterback Ethan Frey returns to command the offense this season after passing for over 1,600 yards and 13 touchdowns last season. Frey, considered to be one of the top prospects in the state, will have recruiters paying close attention to his performances this season.

Frey returns a supporting cast of offensive weapons that will make the Eagles fun to watch once again this season. Grant Ducote, who rushed for over 1,000 yards last season, returns while tight end and recruiting prospect Cole Donahue will be a few options that Frey will have to work with.

On defense, Lane Willis (46 tackles, 1 sack in 2020), Jake Smith (3 interceptions), Michael Woods and Isiah Stinson are just a few of the returners coming back to slow down offensive units.

Rosepine has all the tools in place for a successful season and to even make that deep run in the postseason that the program so desperately seeks.

“With almost all of the offense returning we are expecting to take the program to levels that haven’t been obtained. We are hoping to get past the second round for the first time in program history,” said Ducote.

However, it will be the cohesiveness and experience that head coach Matt Dufresne is counting on in order to see success within the Tiger program this fall.

“This team is much bigger physically than last year’s team and will have a second-year together running the same offense and defense,” said Dufresne. “We expect to contend for a playoff spot this year.”

DeQuincy was only able to play five games last season but with plenty of summer workout time and camps available to the student-athletes, the program is looking to turn things around and get back to normal.

On defense, the Tigers return All-District defenders Hudson Snyder and Chris Simmons while Gavin Gary is back ready to rob more touchdowns from quarterbacks across the region.

Oakdale returns a very young squad but is using the offseason to its full advantage in hopes of churning out a good season in hopes of an appearance in the playoffs.

“We are very thin and young up front and will probably go through some early growing pains,” said head coach Destin Dieterich. “Several skill players return and should help keep us competitive until some experience is gained with our young linemen. We will only be as good of a team in the district as our linemen allow us to be.”

The Warriors have just five returning on offense and will look to its front line to help protect quarterback Dutton Dieterich as well as Jamal Warnell and Dallas Daniels. Seth Longino is one of the returning offensive linemen who is tasked with helping to build a strong line.

On defense, Longino will head up the linemen while Cedrick Allison, Gavin Jack and Christian Jones will be lurking in the backfield.

Oakdale has the potential to earn a decent seed in the postseason and the ability to turn in a high finish in the district. It will be up to how the young squad responds in the toughest of battles against some of the top offenses in Class 2A.

“This group has quite a bit of talent but needs some significant playing time to fulfill that potential,” said Dieterich. “We are mostly just looking forward to some sense of normalcy.”

The effects of Hurricane Laura hindered Vinton from having a “normal” 2020 season. The Lions, under second-year head coach Lark Hebert, hope to use the experience and hardships to rise up and compete this fall.

“Being able to have an offseason and spring practice for the first time should help us improve,” said Hebert. “Hopefully, we have a good summer and continue to grow.”

Vinton returns a good number of starters back on offense and will have to rely on the experienced unit to carry them while Hebert and his staff focus on building up the defense.

Pickering welcomes a new head coach in Jared Underwood, who inherits a team that posted a 5-4 record in 2020. However, the Red Devils will have to endure some growing pains during the upcoming season.

“We lost a lot of key players from last year’s playoff run team due to graduation and students transferring,” said Underwood. “We are going to be a young team and rely on a lot of underclassmen to step up and fill in the areas we lost from last year.

The Red Devils will run multiple formations under the new staff so the starters will have to navigate new waters with the underclassmen by their side.

“The offense is new, so we will have some hiccups along the way,” said Underwood. “We will see some struggles during those first few games but will hopefully start to roll after. Defensively, we look to be solid and want to create more turnovers.

Quarterback Marlon Freeney returns for the Red Devils while tailback and linebacker Savion Adams hopes to lead his squad back to the playoffs and defy the odds set forth in the offseason.

Quote from Dufresne: “This team is much bigger physically than last year’s team and will have a second year together running the same offense and defense. We expect to contend for a playoff spot this year.”

Quote from Fuselier: “Our district should be quite a bit tougher this year with many teams returning a lot of players.”

Quote from Dieterich: “ We will only be as good of a team in the district as our linemen allow us to be.”

Quote from Underwood: “This season is going to be filled with growing pains. We lost a lot of key players from last year’s playoff run team due to graduation and students transferring.”

Quote from Ducote: “The 2021 Eagles will be experienced with seniors and juniors. Expectations are high.”

Quote from Hebert: “Having an offseason and spring practice for the first time should help us improve. Hopefully we have a good summer and continue to grow.”