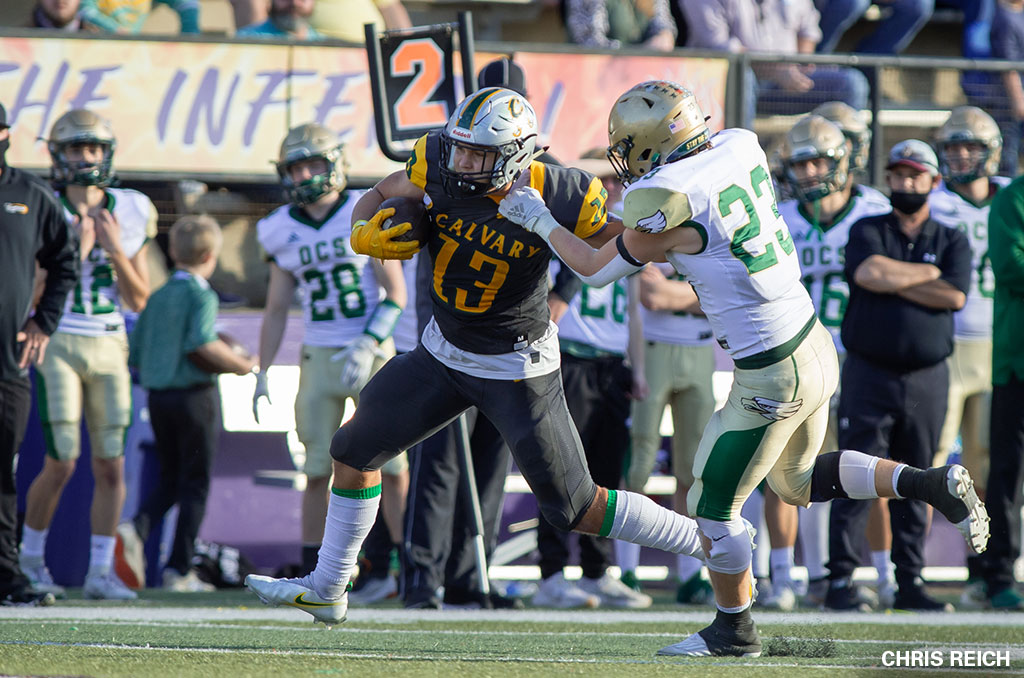 GeauxPreps.com continues its positional players to watch in 2021 with a preview of the tight end position. Included are several exciting players to watch this season plus individual information and additional athletes to keep an eye on.

Brooks has played a vital role in the ongoing success over in River Ridge. The junior tight end will continue to get recruiting eyes focused on his playing ability due to his sizable frame and ability to make plays wherever he may be. Brooks is destined to get Curtis back to its first title game since 2018.

North DeSoto will have no trouble getting the most out of Jack Davlin who not only makes plays but can provide the blocks to make big plays happen. David helped the Griffins to a 6-4 overall record last season and an appearance in the second round of the playoffs. Head coach Dennis Dunn will have Davlin and the rest of the North DeSoto squad ready for a tough preseason schedule.

Andrew Goodwin is another top player to watch in 2021. The junior tight end is young but has a good size to help his Denham Springs club in blocking but also can get open to help make plays around the gridiron. Goodwin’s continued hard work will help to earn more attention nationally while helping to guide his Yellow Jackets club back to the postseason.

Hayes will play a key factor in the success of the Rummel football this season. The Class of 2022 recruit plays a key part on the Raider offense where he caught 13 passes for 264 yards along with two touchdowns last season. Look for more attention to be thrown Hayes’ way from collegiate recruiters.

Owen Harmon had already drawn a couple of offers for his work in the 2020 season that earned him All-District, All-Parish and All-State honors. However, his recent showcases at local camps continue to earn him some attention from multiple collegiate programs around the state. The 6-3, 210 pound athlete will no doubt be a receiver that could rise among the top recruits to watch due to his work ethic and amazing talent.

Micah Johnson had a breakout season for the Parkview Baptist football program last season where he caught 36 passes for 411 yards and seven touchdowns. His performance has drawn attention from the likes of LSU and Ole Miss but the Class of 2023 recruit is sure to get more attention this season. His work during the summer has not only improved his skills but it has increased his confidence that will translate to both sides of the ball.

Danny Lewis is among the top recruits for the Class of 2022 and for good reason. The senior tight end showed out in 2020 where he accrued 1,782 all-purpose yards and 18 touchdowns while helping to lead Westgate to an appearance in the second round of the playoffs. The three-star recruit has offers from multiple programs across the nation including Indiana, Arizona State, Colorado and UL-Lafayette. His fast rise up the recruiting charts is because of his work ethic and ability to keep learning. Lewis will no doubt be a student-athlete to keep watch on this season as he shows out on the gridiron.

Will Randle can do it all on the gridiron, at any position, and is determined to help lead Newman to its first state title game appearance in school history. The rising junior is another weapon that quarterback Arch Manning possesses in his arsenal and when the two pair up, there is no stopping them. Randle will no doubt be a threat to those on the other side of the ball in whatever capacity he serves. His recent work in summer camps has drawn offers from the likes of schools such as LSU and Florida State. He will be a valuable asset to whoever may be lucky to land him.

Although he did not play in as many games as intended in 2020 due to Hurricane Laura, Kaleb Vizier is without a doubt one of the tight ends to keep an eye on this upcoming season. His size and ability to get down field is what sets him apart from most talent. He could be part of a senior group to help get Sulphur past the tropical fatigue and back to its winning ways.

Mile Williams was one of several Calvary Baptist athletes to do it all for the Cavaliers’ championship run in 2020. The stout and tough tight end will continue to serve as a go-to for quarterback Landry Lyddy as the Cavs look to get back to the state title game this season. Williams rushed for 205 yards with two touchdowns but also caught six passes for 113 yards and two more touchdowns. He is an offensive threat that will continue to draw more attention from each collegiate level of football.