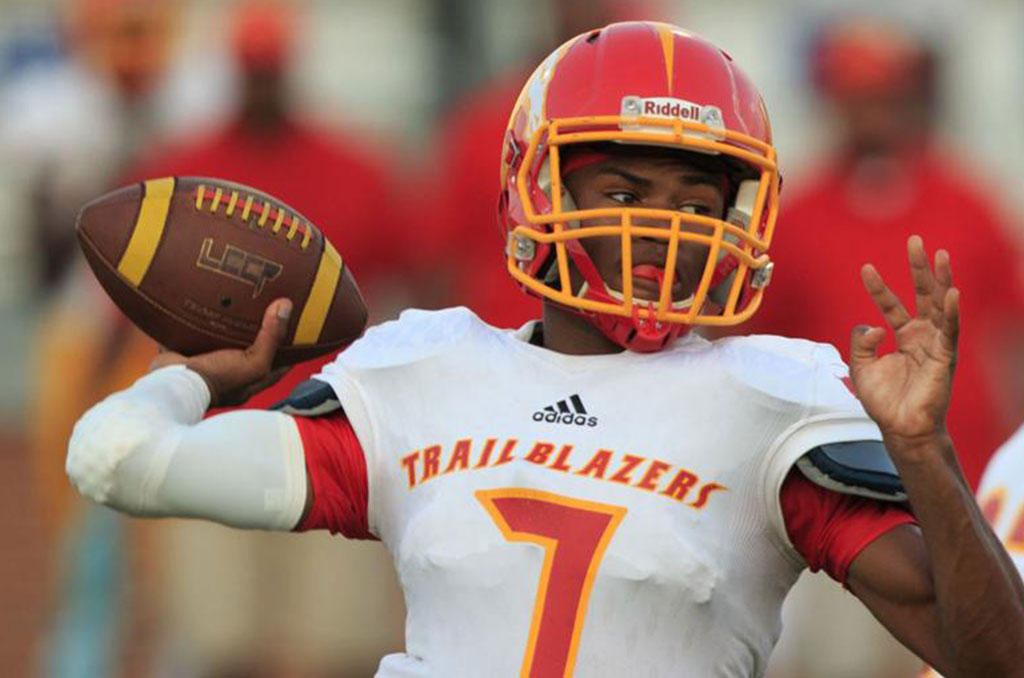 • The story of the evening occurred in Shreveport as a full-out slobber knocker was had as the C.E. Byrd Yellow Jackets took down football powerhouse John Curtis, 14-13, on a rainy Lee Hedges Field.

A missed field goal and a failed extra-point attempt doomed the Patriots’ chances of another state title appearance as Byrd’s defense stood tall and shut down several Curtis offensive attacks inside the red zone.

This will be Byrd’s first trip back to the LHSAA Football Prep Classic since 2013. The Yellow Jackets are looking for their first state championship victory in over 70 years.

• On the other side of the bracket, Catholic of Baton Rouge upended the No. 1 seeded Brother Martin Crusaders, 49-31, to advance to its fourth consecutive Prep Classic appearance.

The Bears look to capture their first state championship since defeating John Curtis in 2017.

• De La Salle continued its dominance on the gridiron Friday night with a 42-2 win against E.D. White. The Cavaliers look to avenge their loss to St. Thomas More from a year ago in the Division II state championship in Natchitoches.

Another rematch will be settled in the 2020 Division III state championship game as the No. 2 St. Charles Comets and the No. 5 Lafayette Christian Knights advanced to the Prep Classic Friday night.

• Frank Monica will have his St. Charles squad ready for another appearance in the Prep Classic following the Comets’ 24-22 victory over Notre Dame on Friday. The legendary football coach seeks his third state title and first since 2011.

• Lafayette Christian has a chance to make history in two weeks when it attempts to score a fourth consecutive state championship win. The Knights advanced to the finals following a 21-7 victory over a strong Newman squad, led by Arch Manning.

It is the rematch that every high school football fan is looking forward to, especially after what happened last season. Calvary Baptist and Ouachita Christian are on a collision course to the 2020 Division IV state title game a year removed from OCS upsetting the highly-touted Cavaliers in a 49-47 shootout.

• In a contest that went down to the wire Friday night, OCS defeated Vermilion Catholic, on the road in overtime. The victory secured the Eagles’ second consecutive trip to the Prep Classic in Natchitoches where they look to defend their title win over Catholic-PC last year.

• Calvary Baptist is on a mission and not many have been able to stop the offensive juggernaut. The Cavaliers’ latest victim was a talented Southern Lab squad who made the trip to Shreveport looking to upset the No. 1 seed. However, Calvary Baptist shut down any opportunity of an upset with a 24-14 win to send the Cavaliers back to the Prep Classic for the first time since 2014. Rodney Guin, a coaching icon in Northwest Louisiana, reached his first state title game as a head coach.

• Alexandria shocked the high school football world on Friday night as it went on the road and defeated the highly-touted Zachary Broncos, 31-28, and advanced to its first semi-final appearance in school history.

The Trojans rallied from a 21-10 halftime deficit with two touchdowns in the third quarter to go up by three over the Broncos. However, the Zachary offense responded with a touchdown to begin the final period and take a 28-24 lead.

Several possessions later and Alexandria found itself in the endzone once again following a 22-yard touchdown pass to go up 31-28 with under three minutes left in the game. The Trojans were able to hold off the Broncos and take the victory.

Will Alexandria be able to store away Friday’s historic win and get prepared for, perhaps, the biggest contest in the history of the program? The Trojans must if they want to upend the mighty West Monroe Rebels, who make the trip to Butch Stoker Stadium next Friday.

The contest is a rematch of the District 2-5A contest from earlier in the season where West Monroe took a close 18-10 victory.

• On the other half of the bracket, Acadiana continued to dominate with a 21-0 victory over Mandeville while Destrehan scored the “upset” over darkhorse Ruston, 6-0.

• The state’s fourth-highest classification has belonged to the Edna Karr over the last four years. Friday proved no different as the Cougars took down Eunice, 40-7, on its own turf to advance into the semi-finals.

A familiar opponent will be waiting in the trenches next week as Warren Easton prepares to face the mighty Karr football squad in the playoffs for the third consecutive year. However, this will not be for the state football championship but for a chance to advance to Natchitoches.

The two squads have faced off against each other in the Class 4A title game the last two seasons with Karr taking both meetings. There is no unfamiliarity between the two squads which makes for an intriguing matchup. It could possibly be the game to watch next Friday.

• Carencro and Neville will meet each other to determine who advances to the state title game in weeks. The Bears took care of Plaquemine last night while Neville blanked Minden on Thursday.

• The top half of the Class 3A playoff bracket was full of surprises Friday night as Madison Prep knocked off the top-seeded Jennings Bulldogs, 27-20. The Chargers will face off against Church Point next Friday.

• On the lower half of the bracket, Class 3A dark horse Lake Charles Prep pulled out a 28-26 overtime victory over a tough Jena squad to advance to the semi-finals for the first time in school history.

The Trailblazers’ victory sets up a date with the Union Parish Farmers, who took down St. Martinville, 47-6. It was only the second time this season that the Tigers had been held to single digits.

The matchup between Lake Charles Prep and Union Parish, set to be played in Farmerville, will feature some of the top talent in the state.

Union Parish features one of the top running backs in the state in Trey Holley, who has rushed for over 2,200 yards this season along with 40+ touchdowns.

• General Trass started off its historic 2020 season with a convincing victory at tradition-laden Evangel Christian. The Panthers then entered the Class 2A playoffs as the No. 12 seed with a 5-2 record.

Most thought that it would be a short run for Toriano Wells’ squad. They proved everyone wrong.

The Panthers advanced to the semi-finals Friday night after posting a convincing 42-18 victory over fourth-seeded St. Helena. It’s the first semi-final appearance for General Trass since 1963.

It has been 57 years since the Panthers had a chance to advance to the state title game. This is a program that had not seen much success since that time.

Coach Wells is in his fourth year with the program and has instantly turned General Trass into a respected football team.

However, the Panthers have one last hurdle to clear before dreaming of a chance to play in Natchitoches.

The No. 1 seeded Many Tigers, who scored a 34-30 win over Amite Friday, is looking forward to hosting its first playoff game of the season when it welcomes General Trass next Friday.

The Tigers were awarded victories in their first two playoffs games via forfeits due to COVID-19 related issues but still had to travel to Amite due to the forfeit wins counting as games. The team who traveled the most in the first two rounds is awarded a home game in the quarterfinals.

Many is hungry to get back to the Class 2A state title game and revenge its loss from a year ago while General Trass wants to continue to make history. It will come down to which two schools want it more.

The game will be a fun one to watch.

• In the lower half of the bracket, another fun match-up will be on deck as the Mangham Dragons play host to Kinder’s Yellow Jackets next Friday night.

Both programs know how to get to the LHSAA Prep Classic. Mangham has played lights out this season while Kinder had flown under the radar for most of the season.

The Yellow Jackets survived a thriller Friday night where they slipped past Loreauville, 21-14, in double overtime.

Mangham took care of business the night before where it defeated a determined Port Allen squad, 35-19.

Whoever leads in the time of possession column next Friday will punch their ticket to the state title games in Natchitoches.

• The Oak Grove Tigers have proved to be the class of the field this season and Friday proved to be no different.

In a battle of the Tiger mascots, Oak Grove advanced to the semi-finals with an impressive 67-14 victory over Logansport.

The Tigers have outscored their opponents 383-201 in nine games this season and are winning by an average of 42-11 per game.

Could this next week be Oak Grove’s toughest playoff game yet? It could be the way its semi-final opponent has been performing.

The Homer Pelicans are on the rise thanks to the leadership of head coach Richie Casey, a Homer alum and former Louisiana Tech football player. A program once steeped in a tradition similar to that of its parish rival Haynesville, the Pelicans took a dive over the last decade due to ever-changing coaching staffs and lack of player interest.

Since taking on the duties as head coach, Casey has done a great job at reviving the struggling program and is taking Homer to its first semi-final appearance since 1985.

To say the least, the Pelican faithful is more than thankful to see their football team playing in December once again.

A close loss to district foe plus a convincing victory over Haynesville increased the Pelicans’ confidence as they rolled into the playoffs and took down Block and White Castle in order to set up a date with Oak Grove.

Homer is one of those teams that must be watched carefully or they could slip up on a team at a moment’s notice. Oak Grove must not overlook this determined and road-tested Pelican squad.

• History was also made on the lower half of the bracket Friday night as Grand Lake and East Iberville both advanced to the semi-finals for the first time in both of their program’s history.

East Iberville rallied from a halftime deficit to take down the 17-time defending state champion Haynesville Golden Tornado on Friday. The Tigers will get the chance to make more history next week if it can score a victory at home and advance to Natchitoches.

One of the best comeback stories lies in Cameron Parish as the Grand Lake Hornets are looking to advance to the state championship for the first time in school history.

However, that has not stopped the Hornets, who look to use their struggles as motivation and punch their ticket to the Class 1A state championship game.

It would be a victory for both the school and the community.