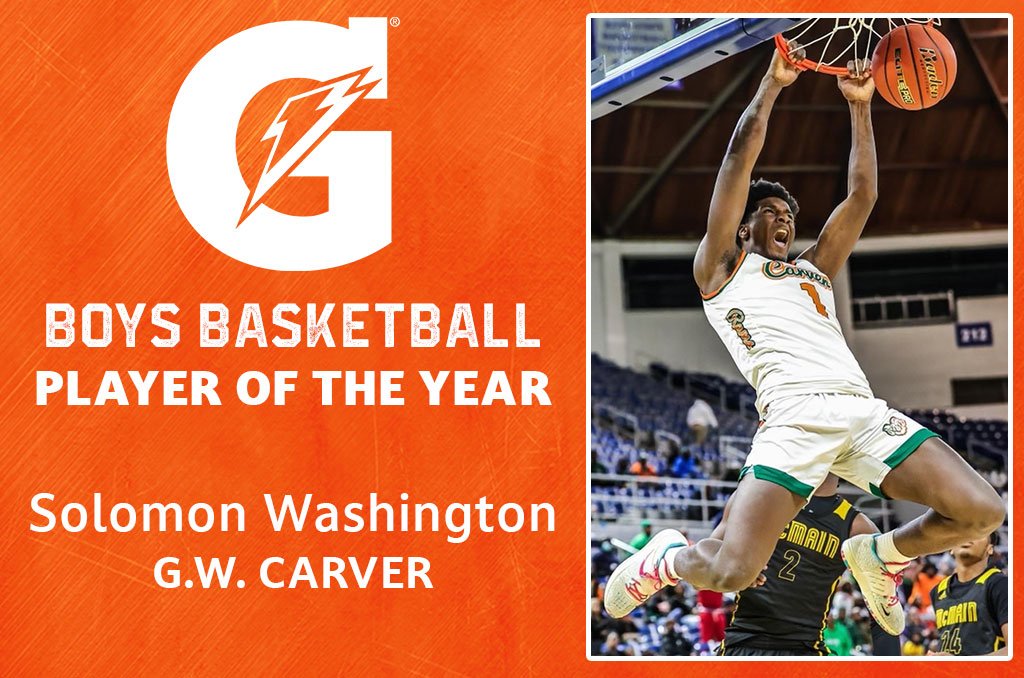 The 6-foot-7, 215-pound senior forward had led the Rams to a 32-5 record and a berth in the Class 4A state final at the time of his selection. Washington averaged 14.9 points, 10.9 rebounds, 2.8 assists, 2.5 blocks and 2.3 steals per game through 37 games. Entering the title game, he’d recorded 22 double-doubles along with a triple-double of 11 points, 10 rebounds and 12 blocks in a 71-42 win over Landry-Walker High School in the state quarterfinals. A two-time First Team All-State selection, he had 1,628 points and 1,415 rebounds in his prep basketball career with one game to play.

Washington has volunteered locally with Thrive New Orleans and as a youth camp counselor. “Solomon is a manchild—no one stopped him this year,” said Carlos Sample, head coach of Scotlandville High School. “He can defend and score in various ways. He’s super athletic and kills on the offensive and defensive boards. He’s a freak athlete.”

Washington has maintained a 3.05 GPA in the classroom. He has signed a national letter of intent to play basketball on scholarship at Texas A&M University this fall.

Gatorade has a long-standing history of serving athlete communities and understands how sports instill valuable lifelong skills on and off the court. Through Gatorade’s “Play it Forward” platform, Washington has the opportunity to award a $1,000 grant to a local or national organization of their choosing that helps young athletes realize the benefits of playing sports. Washington is also eligible to submit a short video explaining why the organization they chose is deserving of one of twelve $10,000 spotlight grants, which will be announced throughout the year. To date, Gatorade Player of the Year winners’ grants have totaled more than $3.5 million across more than 1,300
organizations.