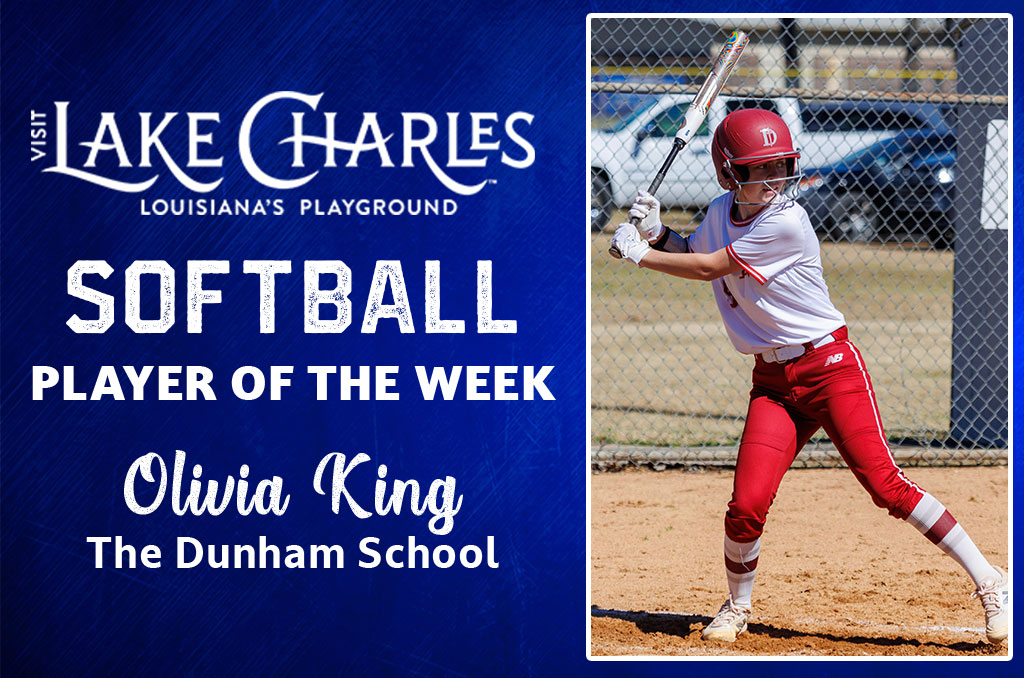 The weekly poll determined by the general public garnered over 56,400 votes. King collected 26,331 votes while Northshore’s Kennedy Ordoyne finished second with over 21,890 tallies.

King was on fire at the plate this week for Lady Tigers, helping push her squad to 9-1 on the year. In 3 games, she had 10 plate appearances, drew 5 walks, and came up with 5 big hits. In those she scored 8 RBIs, crossing the plate 4 times herself. In the field, she had 6 total chances, with 4 putouts and 2 assists.

Clark helped lead Brusly to an undefeated week on the diamond where she batted 11-for-17 (.647) with 11 extra-base hits (four singles, two doubles, five home runs) to drive in nine runs and scored 13 of her own. Three of Brusly’s victories came over upper classification squads including 5A’s Benton.

After suffering from two broken hands last season, Pineville’s Erin Cooper has stormed back to deliver exceptional performances in 2022. Last week, Cooper finished with a .769 batting average in 17 plate appearances where she hit three doubles, a triple and a home run. She drove home 10 runs and had a .824 on-base percentage with no strikeouts.

Maria Detillier was great at the plate this week for Lutcher Softball. She hit an astounding .706 for the week. She went 12-for-17 at the plate with five singles, three doubles and four Homeruns. She also had two stolen bases for the week.

In five games this week, Addison Harvey totaled 17 plate appearances and reached base safely 13 times (.765 OBP). She was 10-14 at the plate (.714 AVG) including one home run, a double, and eight singles with one walk. She had five RBIs and scored 10 runs for the Cubs. She tallied six more stolen bases going 6-6, adding to her career total of 78 stolen bases. As a sophomore, Addison has never been caught stealing in 78 attempts.

Southeastern Louisiana signee Madison Hebert delivered in a huge way in last week’s games after finishing with a .750 (6-for-8) average, with five of the six hits having launched out of the park. In four games, the third baseman accumulated 17 RBIs as she leads the team in both home runs (10) and RBIs (29) on the season.

Jackson turned in another great performance at the plate as well as in the circle for the Gators last week. The Boston College commit tossed 28 total innings allowing just three runs on 10 hits while having struck out 46 batters. Perhaps the highlight of the week occurred in a no-hitter against Walker where Jackson struck out 13 in seven innings. She also delivered at the plate with five bombs on the week including three in one game against Sam Houston.

Norwood helped the Lady Griffins to an undefeated week with wins over programs such as Neville and Sterlington as she batted 12-for-18 (.667) with five of those hits going the distance. The North DeSeoto third baseman drove in 15 runs across all four games played and scored 12 of her own.

Northshore’s first baseman had a great week at the plate batting .833 that included five hits and five stolen bases to help lead the Lady Panthers to a 2-0 mark. Ordoyne slugged 1.000% across both contests.