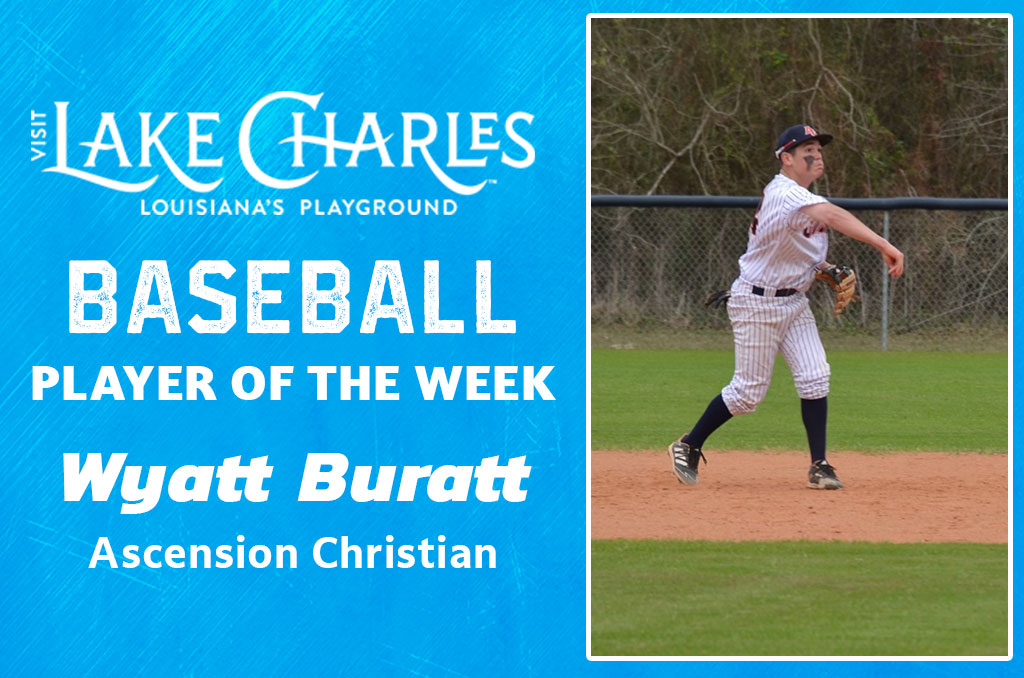 Buratt had a great week at the plate as well as on the mound where he finished with a .700 average along with six RBIs and stolen bases. In a win against Plaquemine, Buratt tossed 6 innings and gave up just three runs while having struck out seven batters.

Ackel led the Patriots to a 10-0 victory over E.D. White last week after working five shutout innings where he surrendered just one hit, no runs and struck out 10. At the plate, he went 3-for-6 with a double and two homers to drive in seven runs while having been walked four times.

Brown turned in an exceptional performance last week in helping lead Sulphur to a 4-0 mark with wins over East Ascension, Hahnville, Dutchtown and Live Oak. At the plate, he batted .588 (10-for-17) with three extra-base hits while having driven in seven runs and stole five bases in the process. On the mound, he picked up a complete-game victory with just four hits surrendered with six strikeouts.

Hebert delivered 10 hits, five in which were extra-base efforts, to help lead Bourgeois to a 3-1 record last week. He drove in seven runs and stole four bases in the process while batting .588 on the week.

Lanerie completed the week with two wins on the mound where he allowed a combined total of just eight hits, four tuns and one walk while having struck out 11 batters in the process. At the plate, he batted .667 and drove in nine runs to help his team to a 4-0 record on the week.

Legg tossed four innings and allowed just one hit and no runs with four strikeouts to shut out Cedar Creek. In batting, he was 6-for-10 with a double and six RBIs and three walks. He stole five bases in the process.

Sandifer played a huge part in an offensive onslaught by the Buccaneers this past week where a total of 72 runs were scored and 49 bases were stolen. The catcher had an exceptional week at the plate as well with a .647 average along with five doubles, a triple and a home run that helped drive in 14 runs.

Smith threw a complete-game shutout in the final game of a series against Class 5A Natchitoches Central throwing only 79 pitches giving up just three hits with four Ks and two walks. He was also 1-for-2 at the plate with a double and a walk.