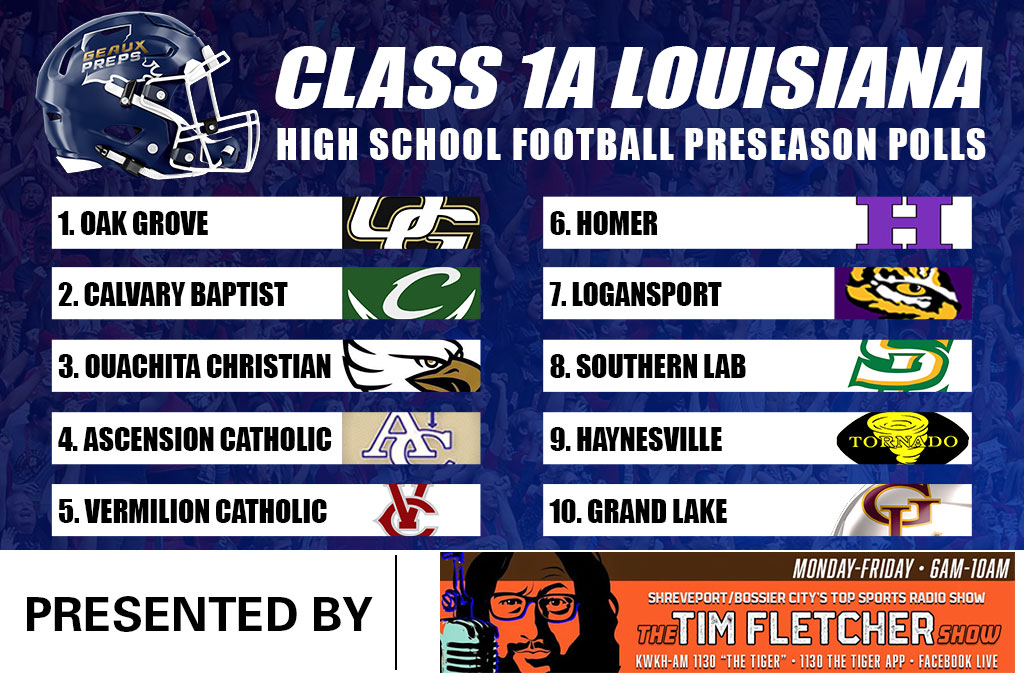 The 2021 Louisiana high school football season is just one month away and teams are starting to prepare for the quest to the state playoffs.

GeauxPreps.com is releasing its preseason Top 10 for each class over the next few days as we count down the days until kickoff and we begin with Class 1A.

It’s no secret that Oak Grove is one of the top football programs in Louisiana and could, without a doubt, compete in districts inside larger classifications. The Tigers are coming off their second consecutive state championship win and are 35-4 over the last three seasons.

“We go into every season with the same expectation, and that is to end the season with a championship,” said head coach Ryan Gregory.

Seven starters return on each side of the ball but Oak Grove will have the task of introducing some new faces in key positions against some formidable opponents early in the season.

“We lost an awful lot of production from last year’s squad, but more importantly we lost a lot of game experience,” said Gregory. “We like our group we have back, and we expect some young guys to step up and fill the gaps.”

The Tigers open the 2021 season at home against Mangham while showdowns with Ouachita Christian and Sterlington await the defending champions in the first month of play.

Calvary Baptist and Ouachita Christian battled in last year’s Division IV state championship with the Cavaliers taking home the gold. The two programs could meet again this season and are bound to be the favorites in the select side of Class 1A.

The Cavaliers return 15 lettermen from last season including seven starters on offense and defense. Senior quarterback Landry Lyddy is set to lead the fray and is expected to have a similar outing to his 3,000 yard mark in 2020.

Ouachita Christian will be strong up front with four of its five linemen returning from last season’s 9-2 mark but will have a new general commanding the offense. Landon Graves has experience in the quarterback position and will have to lead his team early while the defense replaces five of its starters from last year.

Ascension Catholic returns a great deal of experience from last season including highly-ranked recruits in defensive linemen J’Mond Tapp and tailback Khai Prean, who rushed for over 1,000 yards in 2020. Vermilion Catholic must fill the void of eight offensive starters and will rely on a veteran-led defense to hold the Eagles over.

The team that could fly under the radar but has the weapons to easily assemble an offensive attack are the Homer Pelicans.

Head coach Richie Casey returns only 12 lettermen from last season but is fortunate to have most of his offense intact for the 2021 season. The Pelicans begin their 2021 campaign with a tough task in North Caddo while traveling to take on Union Parish outside of district play later in the year.

“We’re returning mostly all of our offense from last year so we should be a little better,” said Casey. “There will be a lot of new faces on defense but those guys can do what we need them to do. I’m expecting to have a real competitive team this year.”

Logansport, Southern Lab, Haynesville and Grand Lake make up the rest of the top teams in the Class 1A preseason poll. All four squads enjoyed playoff runs last season with Grand Lake advancing to the state title on the public side.

Southern Lab will never be outside of the playoff picture and is expected to be in the mix for this season’s Division IV championship while Logansport has enjoyed a successful run of five consecutive trips to the quarterfinals or beyond under head coach Kevin Magee.

And you can never leave out Haynesville when talking Class 1A football. The Golden Tornado finished 7-3 last season with a trip to the quarterfinals. Head coach David Franklin looks for a more experienced group of talent to continue and learn against some of the top teams in the state before grinding out a district schedule that includes Calvary Baptist, Homer and Arcadia.