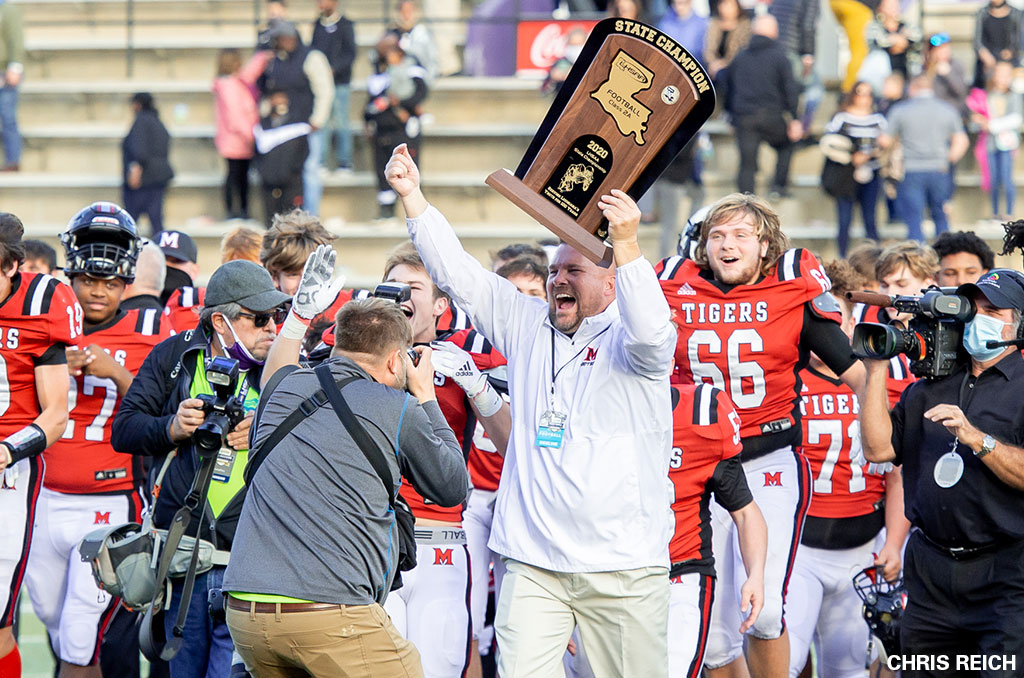 Many High School has not rebuilt for the 2021 high school football season, it has reloaded.

The Tigers are hoping to take the momentum from last year’s Class 2A state championship season and swing it forward into a new campaign that looks promising with a load of talent returning to defend the crown.

Under head coach Jess Curtis, Many returns six of its offensive starters from last season but will be loaded with experience on the defensive side. Highly-recruited target Tackett Curtis will be charged with leading his team on both sides as the linebacker will pull double-duty as the team’s quarterback.

London Williams returns to take over the primary tailback spot and is sure to turn some heads this season after rushing for over 1,500 yards and 25 touchdowns last season. Defensively, Tackett and Keaton Montgomery will look to lock down opponents on Friday nights in hopes of another journey to the school’s third state title under its veteran head coach.

However, Many could be battled tested come November as teams prepare for the playoffs. The Tigers will have to fend over a slew of district opponents including the likes of Red River and Avoyelles.

Although two points separated the two teams in the preseason coaches poll, Avoyelles could have the upper hand when it comes to coaching experience in one of Northwest Louisiana’s toughest leagues.

Head coach Andy Boone, who will start his 13th year at Avoyelles, is not shy when talking about the potential his squad has in 2021. The Mustangs return all but two starters on offense, led by a hoss running back in Carlos Bazert. The sophomore rushed for 1,180 yards and 18 touchdowns and is designed to bush hog over any defender in sight. The Mustangs running game is designed to not only control the game but send its opponents home with multiple bruises and nothing left in the tank.

“We lost three seniors from last year and return most of offense and defense,” said Boone. “Bazert and Terry Augustine are both all-state competitors who will return. Corian Heath also has a shot to be District MVP on the defensive side of the ball. The offense should roll early and our defense should be solid.”

Avoyelles will have to get through the Many Tigers in order to grab the league crown and a top spot in the playoffs but it must also watch for Red River who will also look to vie for the title.

The Bulldogs are getting acclimated to a new coaching staff following the departure of John Bachman, who is now an assistant at Evangel Christian.

Interim head coach Jeff Harper is tasked with continuing to grow the winning culture that Bachman helped instill at the Coushatta city school.

“This team has a lot of experience and will have depth at key positions which include quarterback, receivers, running backs, and the defensive secondary,” said Harper. “We have a great group of freshmen coming in that will provide depth in much-needed areas. We have set our expectations high and look forward to the fall.”

Red River brings back seven starters on both the offensive and defensive side that went 6-3 and made an appearance in the second round of the playoffs.

Bunkie will have to look for another passer to command its offensive attack this year following the graduation of its second all-time leading passer as well as its all-time receiver. Head coach Nick Pujol is excited to compete this season with a good amount of talent returning from a second round playoff appearance in 2020.

“The quarterback position will be manned by a committee of young athletes who each have the potential to become a multi-year starter at the position,” said Pujol. “We are not very big in stature, typically the smaller team each Friday night so we will have to rely on hustle and grit to keep games close and tough out wins.”

Menard will look to bounce back from a losing season under head coach Justin Charles although the Eagles nabbed an appearance in the postseason. Only four returners will be back to guide the defense while the offense must rely on a group of young talent to lead the way.

“This team will be a young but very gritty football team,” said Charles “We expect to compete with every opponent and progress with every rep on the field. With 12 first-year starters, and most of those being sophomores, this will be a huge learning curve for our program.”

Winnfield and Lakeview rounded out the preseason coaches poll as both have struggled in recent years to maintain a steady position in the district race.

However, Winnfield looks to bring back a good amount of talent from its offense last season that could build on a rebuilding phase under head coach Jay Watson.

Lakeview has a chance for explosiveness in the run game according to head coach Brandon Helms and returns running back Dillon Pike to help lead the Gators in their quest for championship gold.

Quote from Boone: “We lost three seniors from last year and return most of offense and defense. The offense should roll early and our defense should be solid.”

Quote from Pujol: “The QB position will be manned by a committee of young athletes who each have the potential to become a multi-year starter at the position.”

Quote from Charles: We have lofty goals for every player and coach so expect this team to progress and hopefully be playing its best football by the end of the season going into the playoffs.”

Quote from Helms: “We have an opportunity to be explosive in the run game but must find a more consistent passing game.”

Quote from Curtis: “We have two extremely talented classes back to back 2023 and 2024 and have us positioned to be in the state championship for the next several years.”

Quote from Harper: “We have a great group of freshmen coming in that will provide depth in much-needed areas. We have set our expectations high and look forward to the fall.”

Quote from Watson: “We are looking for more consistency with our team being it will be the first time in a while with the same offense and same defense schemes in place. Our quarterback has a bit more experience now and should feel more comfortable with what we do.”