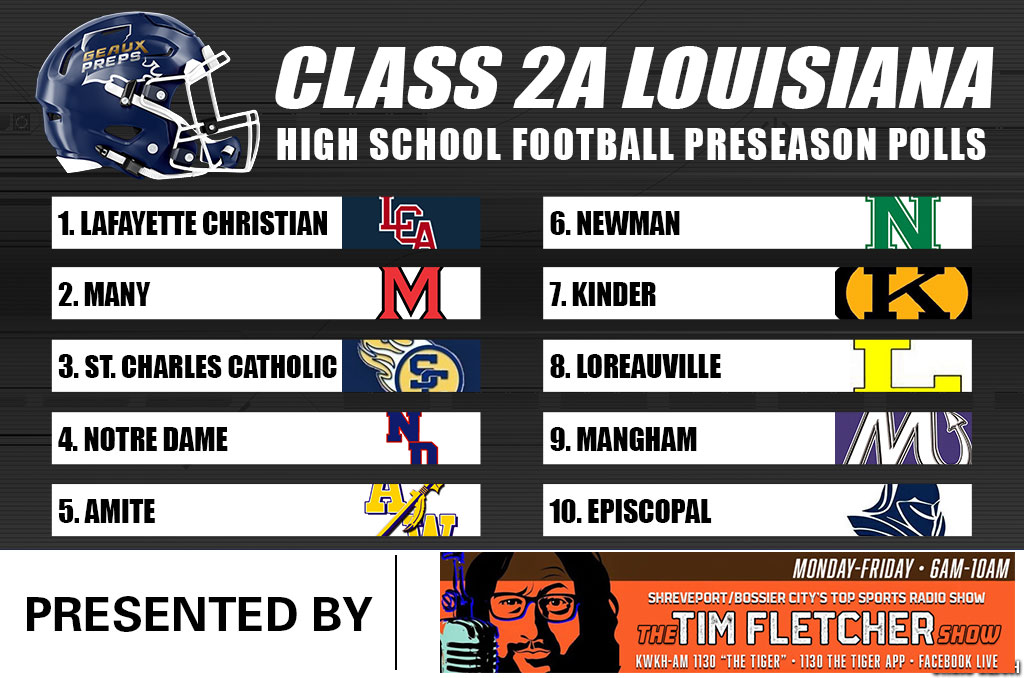 It’s no surprise that Lafayette Christian and Many sit atop of this season’s Class 2A preseason poll presented by The Tim Fletcher Show.

The two squads have dominated foes on the gridiron over the last couple of season’s and are primed for another strong outing in 2021. The Knights are on a quest to capture their fifth consecutive state title, a feat only accomplished by one other team in Louisiana high school football history.

Newly named head coach Trev Faulk hasn’t made the road towards another gold trophy any easier for his squad. The Knights are scheduled to do battle with some of the top programs in the state such as Acadiana and Catholic of Baton Rouge.

Many has become a football juggernaut in Class 2A and has no plans of relinquishing its position as one of the top programs in the state. Head coach Jess Curtis returns six offensive starters from last season but will be loaded with experience on the defensive side. Highly-recruited target Tackett Curtis will be charged with leading his team on both sides as the linebacker will pull double-duty as the team’s quarterback.

However, Many could be battled tested come November as teams prepare for the playoffs. The Tigers will have to fend over a slew of district opponents including the likes of Red River and Avoyelles as well as non-district foes Union Parish and North DeSoto.

For the first time in a long time, St. Charles Catholic has a new head coach roaming the sidelines. Long time assistant Wayne Stein takes over for legendary skipper Frank Monica, who retired after leading the Comets to the 2020 Division III state title game.

Stein has some huge shoes to fill but is up for the challenge and will have his team ready to compete early with a season opener scheduled against Class 5A Archbishop Shaw as well as Division II runner-up De La Salle before district play.

Three things are certain in life – death, taxes and Lewis Cook leading Notre Dame into the postseason. Cook, who enters his 37th season as a head coach and owns 373 career wins, will have the task of replacing several key positions but with a good nucleus from last season returning, he may not have to work too hard to get his squad ready for 2021.

If the Pios can remain healthy throughout a grueling schedule and can get his offense on point by the time that district rolls around, look for Notre Dame to be in the picture come late November.

On defense, the Warriors will need to find some new faces to step in at the secondary positions but never count out this hard-nosed squad who knows how to win in December.

Newman will have all the tools needed to make it all the way this year. Led by some of the most sought after recruits in program history, the Greenies have a shot of making history in 2021.

Head coach Nelson Stewart has focused his attention on strengthening his squad during the offseason in an effort to get his experienced squad that extra advantage come time for the playoffs. The Greenies have advanced to the semifinals the last three years and with quarterback Arch Manning continuing to develop at the highest level and receiving targets working every day to get better, it’s all but certain this program could have a team of destiny.

Kinder, last year’s Class 2A state runner-up, will be in the mix once again this season. The Yellow Jackets will have to grind through a tough district schedule and develop some new talent after losing a good portion of starters from 2020.

Loreauville could be the dark horse team to watch for in the fall as the Tigers return seven on offense with the expectations of some explosive play calling from the sidelines. On defense, head coach Terry Martin must rely on his secondary and line to pick up the slack early in the year.

No matter the obstacles, Loreauville could be in the mix if expectations are met.

Mangham and Episcopal round out the top 10 and could arguably ranked higher after impressive outings in 2020. The Dragons advanced to the semifinals and finished 11-1 while Episcopal lost just once following an undefeated regular season.