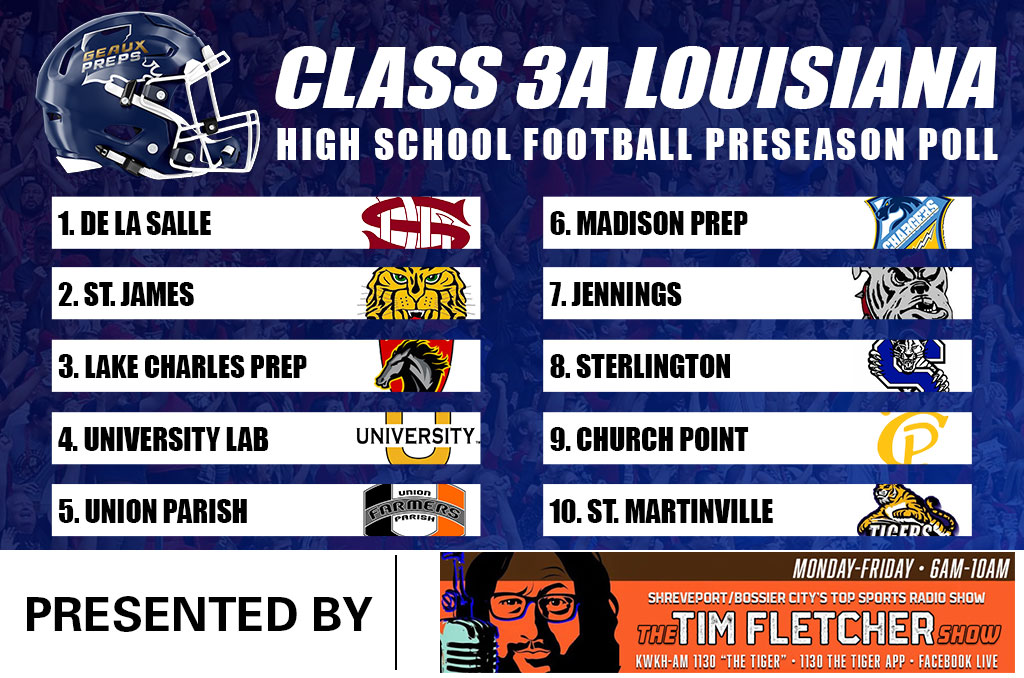 It can be argued that Class 3A contains some of the best football programs in the state of Louisiana, each supported by a strong cast of talented and highly sought-after student-athletes.

The 2021 season will be no different as squads prepare for what could be one of the most interesting seasons in recent memory. Determined to prove its worth in the LHSAA power ratings at the season’s end, multiple schools have scheduled some of its toughest competition.

De La Salle is one of those programs that has taken on the task of beefing up its pre-district schedule with the likes of St. Charles Catholic, Lake Charles Prep and Scotlandville.

The Cavaliers open their season on the road at North Pike, a Class 4A school in Mississippi.

First-year head coach Graham Jarrott is charged with the task of getting his team prepared for the grueling weeks ahead before entering league play. With 13 starters (8 offensive, 5 defensive) returning from a state-runner up performance last season as well as 43 lettermen total, the new skipper hopes to have his veteran led squad running like a well-oiled machine sooner rather than later.

“We have a very talented team led by key seniors,” said Jarrott. “Our schedule is very difficult and we will be tested early in the season.”

St. James will look to improve upon its 8-3 record from last season and hope to push for another state championship.

The Wildcats will lean on an experienced and explosive offensive group early on in the season while the younger but talented defense finds their groove.

With seven returning on offense and five starters coming back to anchor the defense, head coach Robert Valdez has a shot to have his squad deep into the playoff picture come late November, but it won’t come without its challenges.

St. James is scheduled to go up against some talented squads such as Class 5A’s East St. John and five-time state championship participant Edna Karr, all within the first five weeks.

These matchups could prepare the Wildcats for the competitive postseason while also giving them a chance to work out any kinks against some of the best competition in the state.

Lake Charles Prep has a great deal of talent returning to potentially lead the Trailblazers to a state championship appearance. The Lake Charles school was able to advance to the semifinals of last year’s public school playoff enduring the devastation caused by two hurricanes in the process.

With six returning on offense and eight on defense as well as possessing seven Division I committed student-athletes, Lake Charles Prep is all in and ready for its most anticipated season yet. Fans will be eager to watch some of the top talents in the state such as tailback Trevonte Citizen and receiver Keshlon Jackson while the defense, led by Daylon Sibley and Kevon Freeman, looks to wear down opponents early.

The Trailblazers’ first five games of the season will emanate from Lake Charles but it won’t come without its challenges. Contests against larger schools such as Plaquemine, Southwood and Westgate await the Blazers while a date with De La Salle will highlight the home slate.

Perhaps one of the state’s dark horses shouldn’t even be labeled in that category. University Lab has seemed to fly under the radar but never count out the five-time state championship program.

The 2021 Cub squad returns many of its starters and experienced players from last season. With seven returning on offense and five on defense, University hopes to use its upperclassmen chocked full of experience to wade through a challenging schedule in the fall.

“Our schedule will provide a great test to our team this season, said head coach Andy Martin. “We will travel to New Orleans to face Rummel the first week. We will then start district and have also added Dunham to the schedule.”

The two finalists from last year’s Class 3A title game come in at the next two spots with Union Parish looking to avenge its loss in the title game after a near-perfect season.

Head coach Joe Spatafora will have all but three starters coming back to lead his offense with Trey Holly leading the way at tailback. Holly, a junior, rushed for 2,700 yards and 44 touchdowns in 12 games last season and has over 4,300 career yards.

“The offense will be strong with all the backfield and receivers returning along with most of the offensive line,” said Spatafora. “Our defense replaces a lot but will have more speed and athleticism on the field.”

Union Parish won’t have a chance to ease into the 2021 campaign as the Farmers have a date with Class 2A power Many High School in the season’s first game.

Madison Prep had quite the run last season to claim its first state championship as a program. However, the Chargers will be in a serious rebuilding phase with only four starters returning from last year.

The rest of the field will look to prove all doubters wrong as they jump into the 2021 schedule. Jennings hopes to bounce back from a seven point loss to Madison Prep in the quarterfinals while Sterlington aims for another state title run under the leadership of its senior ladened squad.

Church Point and St. Martinville will not be programs to overlook at any point in the season and could be a factor late in the postseason.