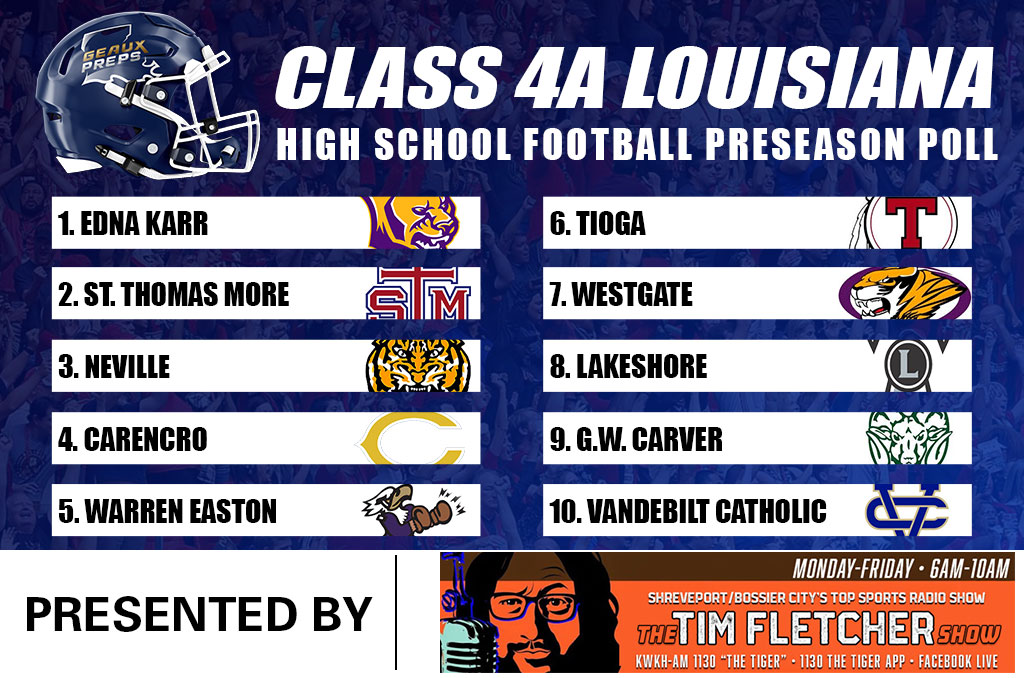 No matter the classification or general circumstances, expect Edna Karr to hold its rightful place towards the top of any preseason polls.

The Cougars are winners of four of the last five state titles in Class 4A and with a good portion of that talent returning in 2021, the New Orleans squad is primed and ready for another championship trophy.

Head coach Brice Brown has a reliable offensive unit returning including junior quarterback A.J. Samuel as well as Aaron Anderson. On defensive, Karr brings back its entire secondary as well as the line.

The schedule for this season will not be for the weak and Brown wouldn’t want it any other way. The Cougars are slated to do battles against teams such as Class 3A defending champion Madison Prep and nationally-ranked squad American Heritage out of Florida.

St. Thomas More scored its second consecutive state title victory in 2020 and hopes to carry that momentum over for the fall. Head coach Jim Hightower will have his work cut out for him as there will be plenty of new faces that hit the field this season.

Yes, the Cougars return all-state and nationally decorated slinger Walker Howard, but the pieces around him will all be new. Outside of offensive lineman Owen Britton, the Cougars will be all-new upfront with very little varsity playing experience. The top three tailbacks and the top five wide receivers from last season are gone as well as the tight end.

However, this has been the story for the Cougars throughout the years and they do such a good job of developing their players we are sure expectations will still be high in Cougar Country.

On Defense, the Cougars will have to replenish quickly as the 2021 schedule will give them no time to ease in the new pieces. However, the one thing the Cougars do well on defense year in and year out is playing a number of guys throughout the season. Players such as Richard Seymour, Jude LaSala, John Hayes Waguespack, Alex Fink, Jacob Stokes, Luke Soileau and Holden Mathews played valuable snaps through the season and will be expected to step up as the offense finds its way.

There is one team that knows its way around the gridiron and is expected to be back in the state championship picture this season as the Neville Tigers prepare to return over 30 seniors for the 2021 campain.

Second-year coach Jeff Tannehill brings back a ton of experience on each side of the ball as seven return on offensive while eight return on defense.

With the addition of veteran defensive coordinator Mike Collins, the Tigers are sure to have one of the most disciplined defensive units in the state. That could also spell doom for those listed on Neville’s fall schedule.

On offense, nationally-ranked recruit Will Campbell is set to lead the Tigers as they do battle against Ruston in Week 1 followed by a showdown against St. Thomas More in Week 4.

For the first time in over two decades, the Carencro Bears hoisted championship gold after taking down four-time defending champion Edna Karr in last season’s Class 4A title game.

The Bears looks to sustain that success but will have to put in the work during the season. Head coach Tony Courville brings back just eight starters from last season including just three on defense.

However, don’t expect the Bears to falter just yet. Courville will have his team ready to play a grueling schedule and will be a name to seek come time to release the playoff brackets.

Warren Easton’s schedule could be one of the strongest in the state this fall as the Eagles start off with a trip to Florida for a date with Class 6A Navarre High School before a string of Baton Rouge trips to play against Woodlawn, Scotlandville and Catholic-BR.

Head coach Jerry Phillips will have a team destined for greatness on hand to help with the strong slate as 10 return on offense while the defense is loaded with returners from last year’s semifinal run.

With the talent returning and the experience of playing in big games, the Eagles could have a shot at its third state title appearance in five seasons.

Tioga has a young but talented squad returning from an 8-2 finish last season but the Indians must rely on its first non-four year starter at quarterback in eight years to lead the way.

Head coach Kevin Cook has put together a tough non-district slate in hopes of toughening up his young squad in hopes of competing and taking home the district crown as well a strong showing in the playoffs.

In one of the toughest districts in Louisiana high school football, Westgate has the chance to do what most teams can’t and that is to go up against the likes of St. Thomas More and Carencro.

The Tigers bring back 20 starters from last year and are determined to shoot up the polls and into a state title contender. Head coach Ryan Antoine will have his team prepared and with one of the largest senior classes in recent history, Westgate could be a sleeping giant ready to wake and assert its dominance.

The rest of the field includes Lakeshore that struggled last season due to injury and COVID-19 related matters but the Titans will use the experience instilled upon the upperclassmen to their advantage.

Eight return on defense in hopes of implementing a stout and intimidating approach of shutting down opposing offense.

G.W. Carver comes in at No. 9 while Vandebilt Catholic rounds out the list. Under new head coach Tommy Minton, The Terriers strength will be the front seven on defense and skill positions on offense.