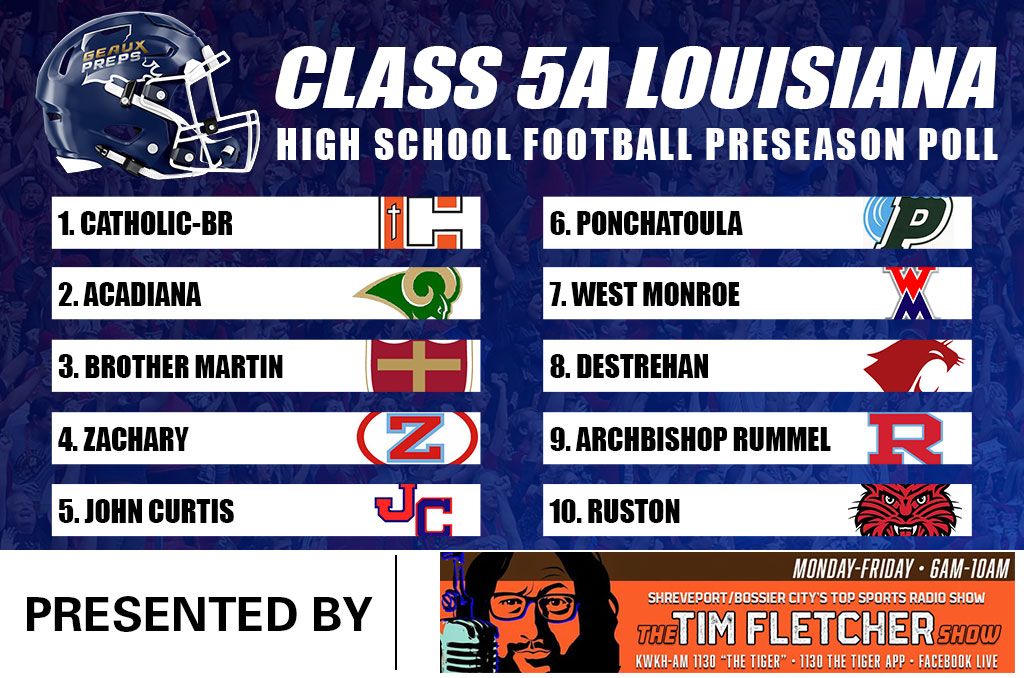 The largest classification in Louisiana high school football will have nothing short of talented programs vying for the prestigious title of state champion this fall.

Leading the fray is Catholic of Baton Rouge who returns a slew of varsity experience from a state championship squad in 2020. The Bears will have eight starters on offense with the defense only having to replace three.

Catholic will start the season with one of the toughest non-district schedules amongst Louisiana high school programs with a road trip up to Maryland for a contest against Our Lady of Good Counsel before returning home to play defending Class 5A champion Acadiana.

From there the Bears will have contests at West Monroe and Lafayette Christian and home date with Warren Easton.

The Catholic-Acadiana contest is one of the most anticipated matchups and the Wreckin’ Rams will be ready to play come Week 2. Despite only returning six starters on each side of the ball, Acadiana has the potential to carry over its championship momentum but will have to rely on some new faces in its quest for a third straight title.

The development of a new quarterback and a few young offensive linemen during the offseason will prove to be key for the Rams early in the season against some stiff competition while head coach Matt McCullough is tasked with mentoring a few new defensive backs to take over for the departing Derreck Bercier and Ian Montz.

However, Latterance Welch and Walter Bob return to anchor the defense while Kaden Anderson is poised to help lead his squad back to the final game.

Acadiana will have to prove its worth early in the year as it gets set to do battle against teams such as Carencro and Lafayette Christian.

Brother Martin arguably has one of the most grueling schedule of games slated to take place this fall but will be ready for the challenge when it returns to the gridiron in 2021.

The Crusaders return a majority of its offense from last year’s 8-1 historic season that culminated with the coveted Catholic League title, the team’s first since 2008. Despite losing to eventual champion Catholic-BR in the semifinal round in last year’s Division I playoffs, head coach Mark Bonis is determined to carry the momentum and lessons learned into a promising year.

Returning to lead the offense is quaterback Garrett Mmahat who threw for over 1,700 yards and 16 touchdowns while the defense returns seven of its starters from last year.

Zachary will have all the tools it needs to succeed on the field this season with Texas A&M quarterback Eli Holstein returning to lead the offense. The Broncos must replace four offensive linemen from last season but with Holstein’s natural ability to get the ball where it needs to go, expect this team to make a deep run in this year’s playoffs.

Head coach David Brewerton returns a good chunk of his defense this fall and with a young offense searching to find its identity, the Broncos will have to rely on breaking down opposing offenses during the first stretch of games this fall.

John Curtis struggled for the first time in a long time last season but that is never a cause to count out the all-time winningest football coach in Louisiana history.

J.T Curtis, who is two wins shy of 600 career victories, is set to lead his squad back to prominence after a four-year absence from an appearance in the state championship. The Patriots return just nine overall starters last year but are banking on a slew of letterwinners from last year to grab the ball and run with it.

The majority of the squad will go into the 2021 season untested due to a lack of games last season but the Patriots coaching staff will always have their team ready to play come Friday night.

Quarterback Buddy Taylor returns to lead the offense and the dual-threat quarterback is ready to thrive in his senior season after compiling over 1,500 total yards on the ground and in the through the air.

Defensively, John Curtis returns four of its starters but will be led by Conner Oregeron at linebacker as the Patriots get set to for a series of tough contests against Louisville Male, KY, Archbishop Rummel and Brother Martin.

Ponchatoula is determined to prove that it belongs in the championship picture this fall as the Green Wave get set to return to the field with 17 returning starters as well as over 45 letterwinners from last season.

Leading the way is five-star prospect Jacoby Mathews who does it all on both offense and defense. The highly recruited student-athlete led his team with 951 yards passing and 10 touchdowns while rushing for near 700 yards on the ground. Tailback Brayden Johnson added 1,000 yards rushing as well as 10 touchdowns.

The Green Wave is expected to be even better this season and is poised for a great showing in the postseason should it keep the majority of its returning starters healthy this fall.

West Monroe has a schedule loaded with very talented teams ready to take down the historic program but head coach Jerry Arledge, as always, will have his team prepare to handle the pressure. The Rebels will take on the likes of Brother Martin, Catholic of Baton Rouge and Neville early in the year before a tough district slate that includes Alexandria and Ruston.

Arledge returns over 35 lettermen from last year’s semifinal run and will have six starters on each side of the ball. However, the old ball coach must replace his starting quarterback in Lane Little as well as a supporting cast of offensive weapons. However, he returns athletes such as Rayshawn Pleasant, Ja’dais Richard and Chauncy Lee to help carry the Rebels.

Despite losing talent on both sides of the ball and not having much of a junior varsity season in 2020, the Rebels are expected to compete well against some of the top programs in the state.

Destrehan enjoyed a 10-win campaign last season and with a majority of its offense returning in 2021, the Wildcats could have an even better season waiting ahead of them.

Head coach Marcus Scott has the program continuing to roll in just his second year at the helm. Success is nothing new to Scott who led his program to its third semifinal appearance in five seasons while continuing a string of three 10-win efforts.

Defensively, Scott will have his work cut out as he will have to replace six starters. However, look for the Wildcats to be in the mix late in November.

Archbishop Rummel and Ruston round out the preseason poll for Class 5A with both squads ready for a tough grind with hopes of once again reaching the state playoffs.

Rummel brings back just eight starters from last year’s squad while the Bearcats are determined to upend favorites West Monroe and Alexandria for the district crowns.

Ruston faces one of the toughest slates this season with contest against Neville, Rummel, Carencro and St. Thomas More.